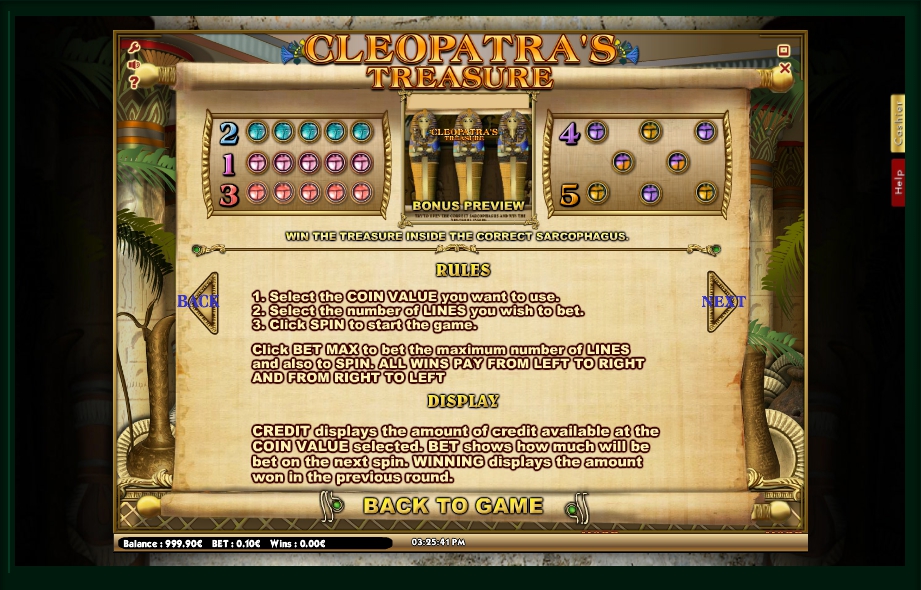 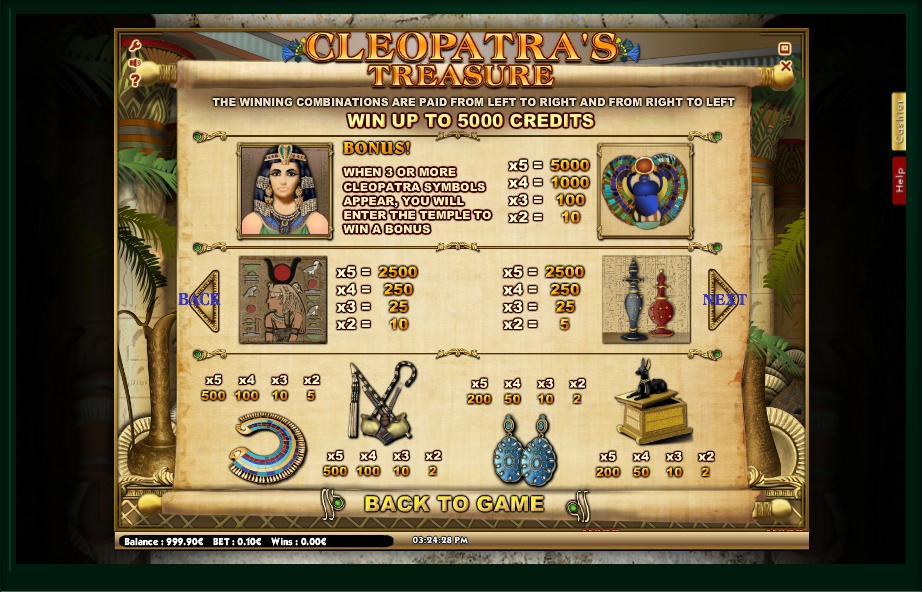 Before Egypt became a place of tourists’ summer vacations, it was a rich and mysterious country, Gods’ beloved place. Its borders were close for foreigners, because no one except Egyptians was allowed to grab a part of the legendary treasure of “home of the ka of Ptah”. In this iSoftBet online casino game called “Cleopatra Treasure” we will not give you a five-stars hotel near the warm sea, but you will earn more – the mystery and some adventures for weekends.
Join us in a spectacular time travel to Ancient Egypt, where, as myths say, Cleopatra has hidden a fantastic prize for the bravest and boldest adventurers. A pristine temple with beautiful scarabs, jewels and Egyptian hieroglyphics contains hundreds of thousands of golden coins, which can become yours in a moment! Just open “Cleopatra Treasure” in your browser and earn real money without real efforts. There is no download needed!

As soon as you have packed all the things a brave treasure hunter might need, start the “Cleopatra Treasure” gambling by choosing the size of the bet coin: it defines from 0.02$ to 2$ per every single line. Next, decide how many paylines out of 5 would be played. You will not need to choose the amount of coins on each payline, as soon as the maximum number of them is 1 coin per payline. As you see, there is almost no chance for you to lose much money – the biggest bet in “Cleopatra Treasure” is 10$.
If you feel lucky enough, spin the reels with the maximum bet in one click with the help of the “BET MAX” button. The player is also provided with an ability to spin those reels automatically for some quantity of spins – press the “AUTOSPIN” button and enjoy the sound of money catching.
By betting only 10$, you are able to win 2.500$ – that is 250 times more than the initial bet! Where else can you become richer at 2500$ in a second? Only in “Cleopatra Treasure”, your money can be multiplied hundreds of times – and they definitely would, as soon as you will win the jackpot – 5 Scarabs situated in a payline.
Talking about winning combinations, there is a bunch of valuable symbols, for which you get money. Cleopatra herself has come to help you to get the highest prize – and so she became a Wild symbol, with the help of which your combos would be finished even if there were not enough of needed symbols. Jewelries, vases, Sphinxes and wall drawings will provide you with good money too – you can earn up to 2.500 coins by hitting a combo.

Do you still need more? The “Cleopatra Treasure” slot machine can provide you with that. The greatest feature in the “Cleopatra Treasure” slot game is its bonus round, which is provided by the Cleopatra bonus symbol. By getting a payable combination of three such icons, you will be moved to an ancient hall where 3 sarcophaguses are placed. Each of them is filled with gold – however, its amount is different. Challenge your luck and choose one of the sarcophaguses – but be careful, you might take the cheapest! The game ends as soon as you decide which one prize you will get and leave the treasury. Yet, there is a chance to re-open other sarcophagus in case you are not pleased with the filling of the chosen one – if this happened, whenever your new loot is cheaper or more expensive, you lose the first one sarcophagus and take that you have opened.