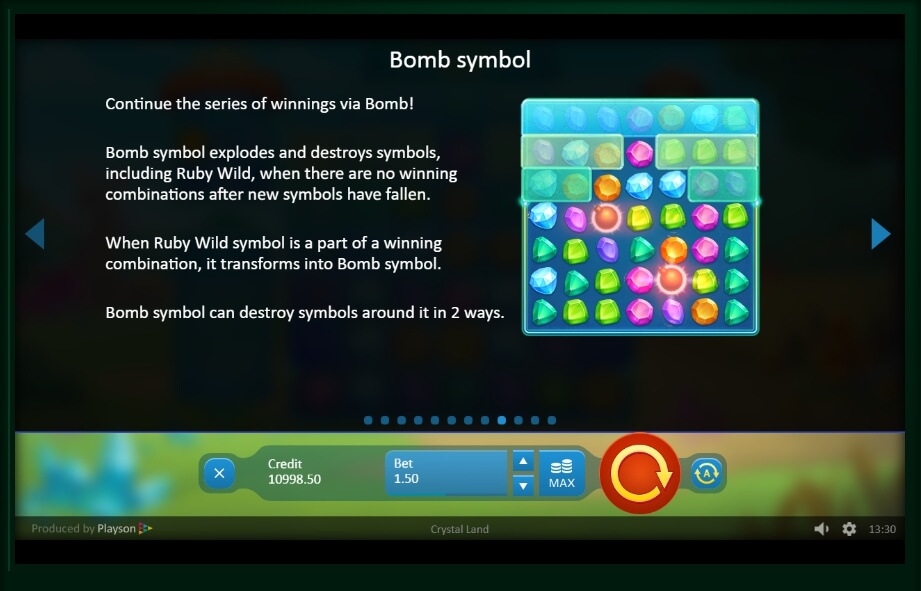 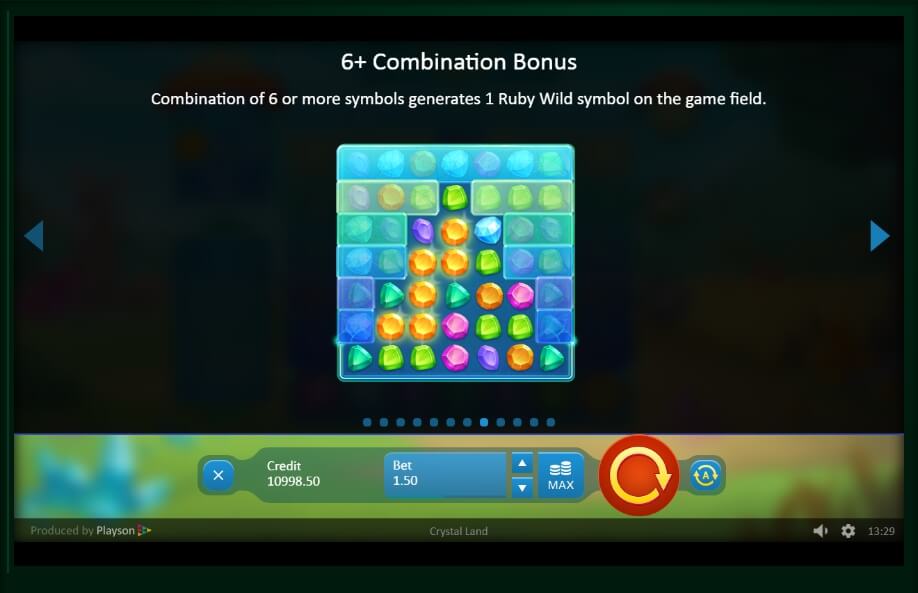 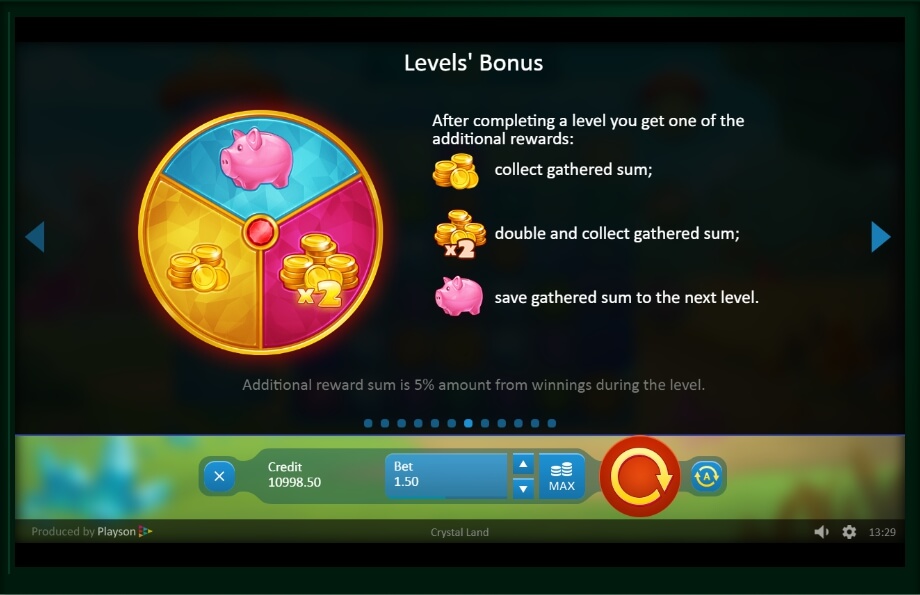 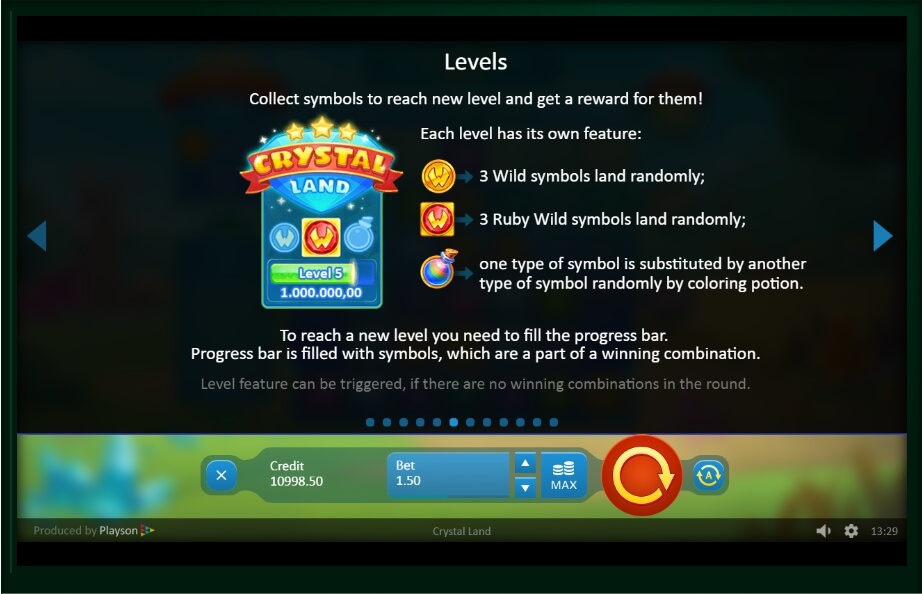 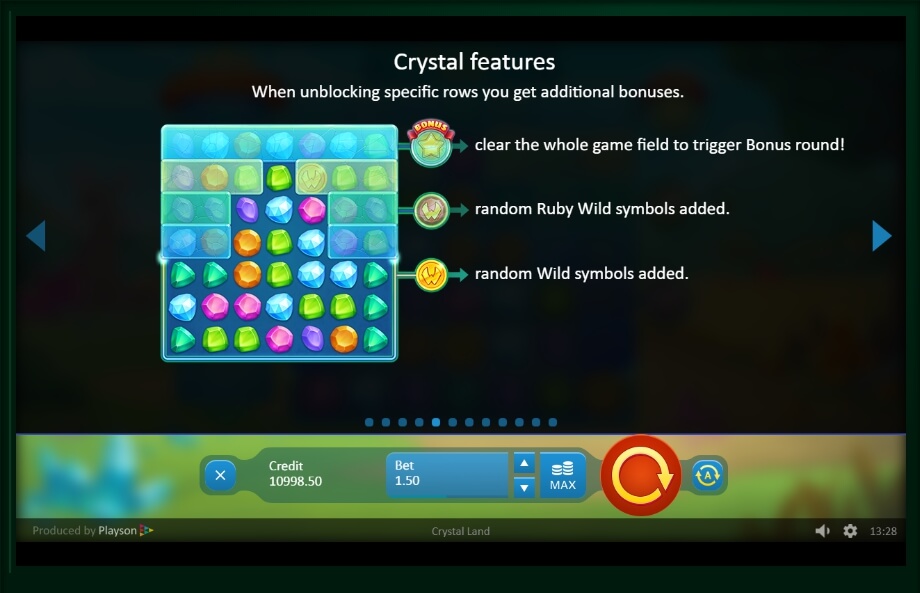 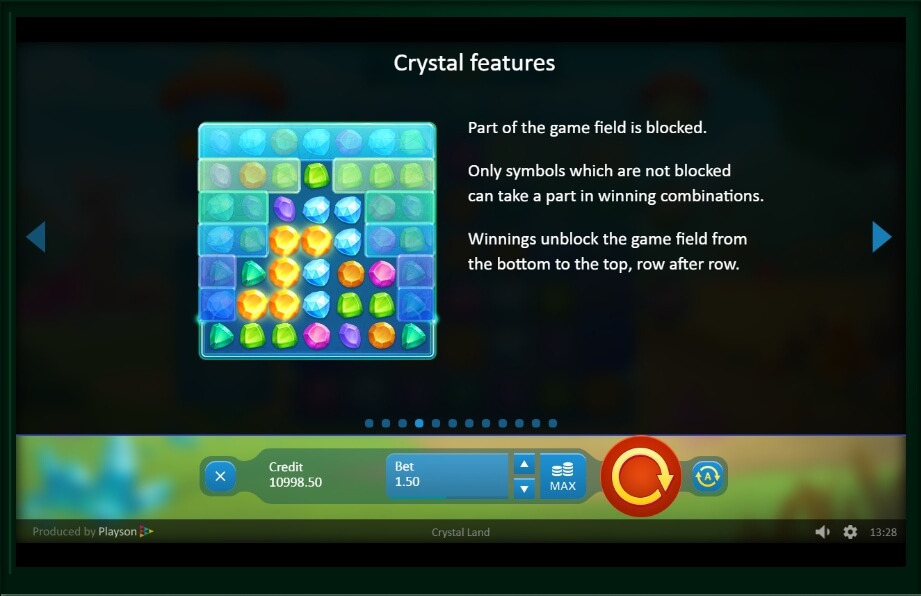 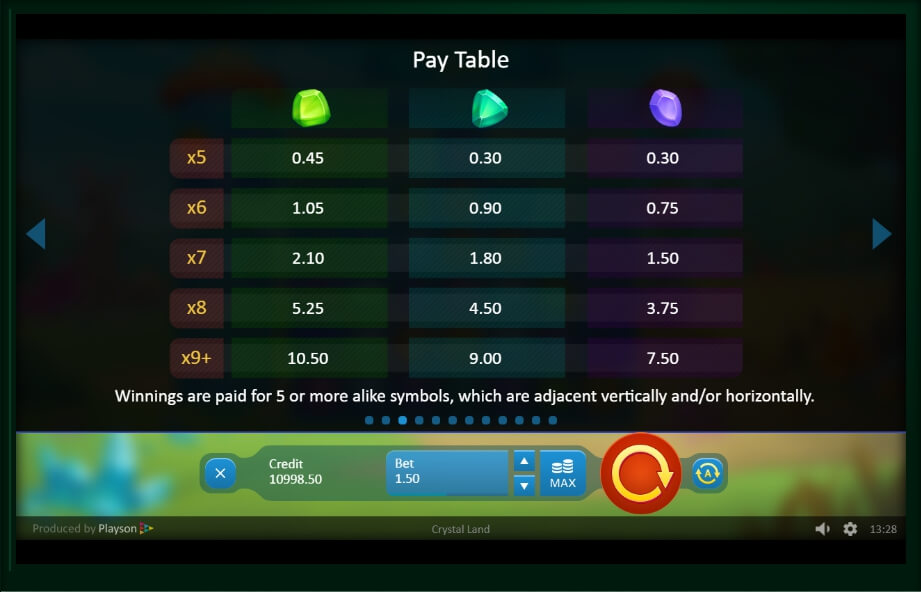 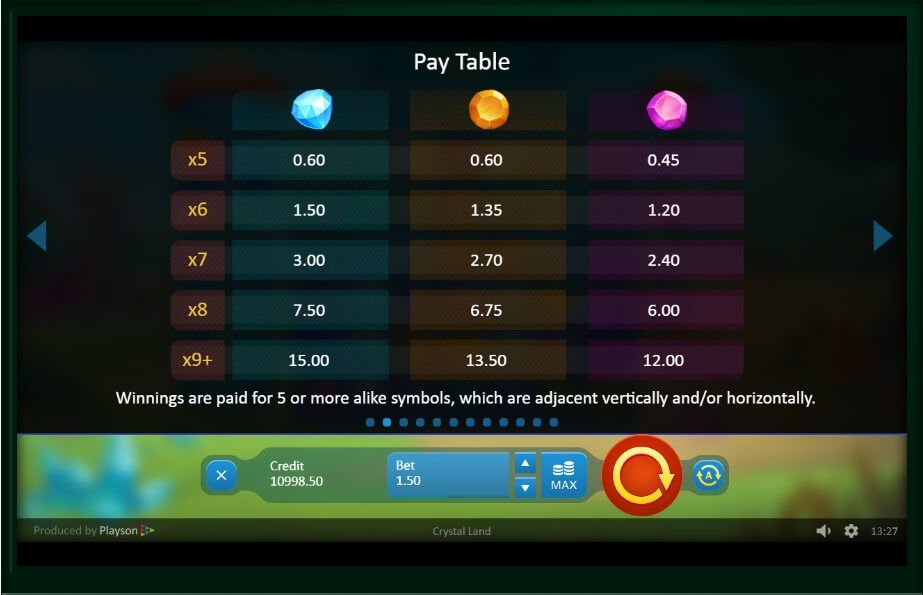 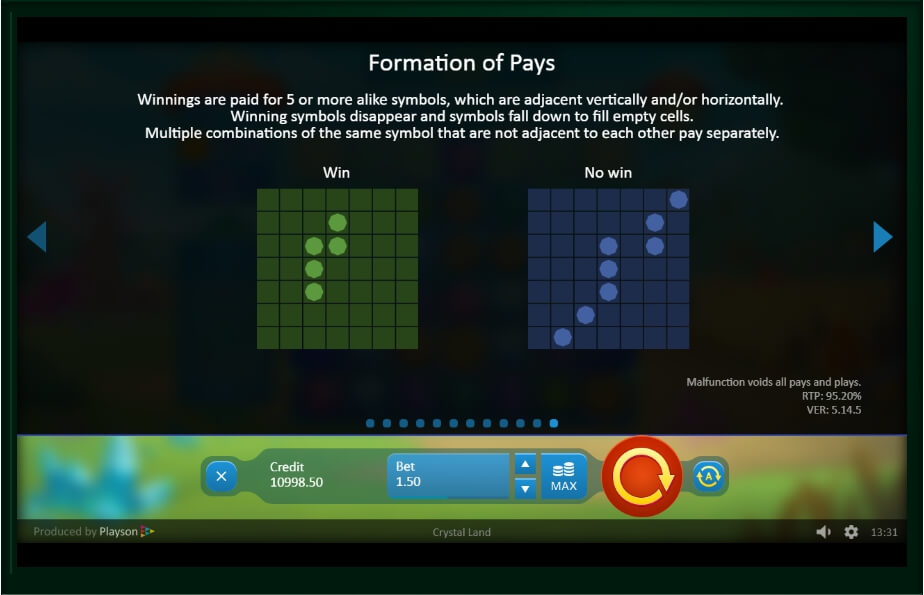 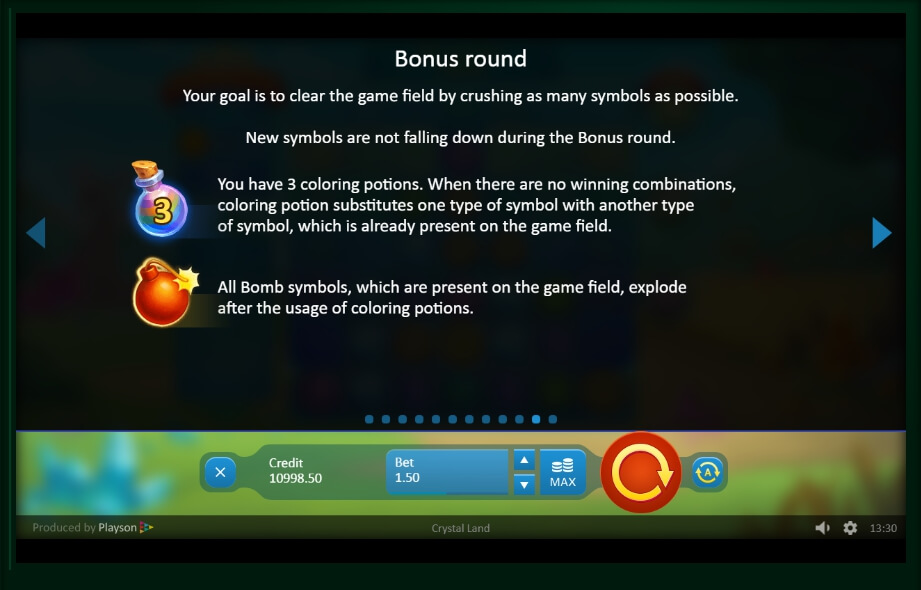 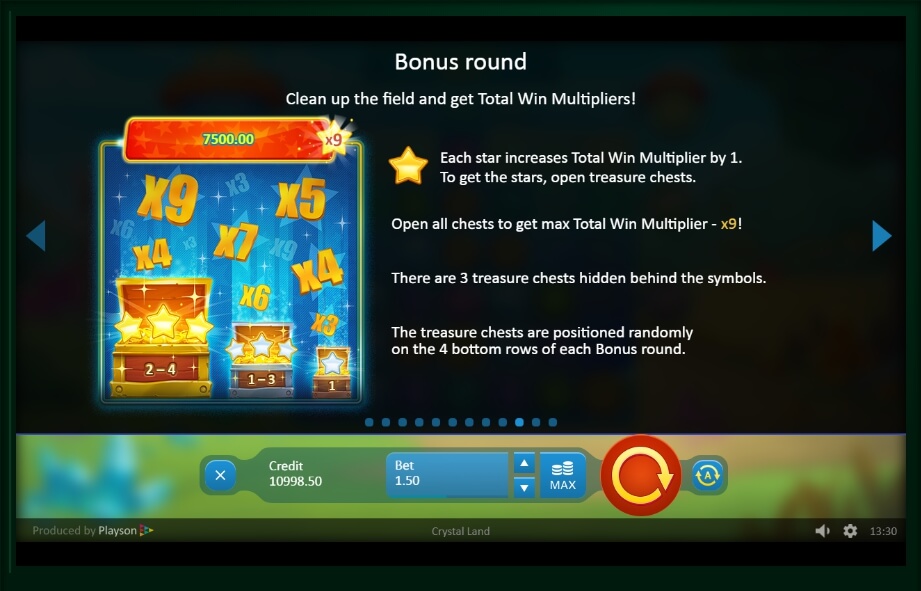 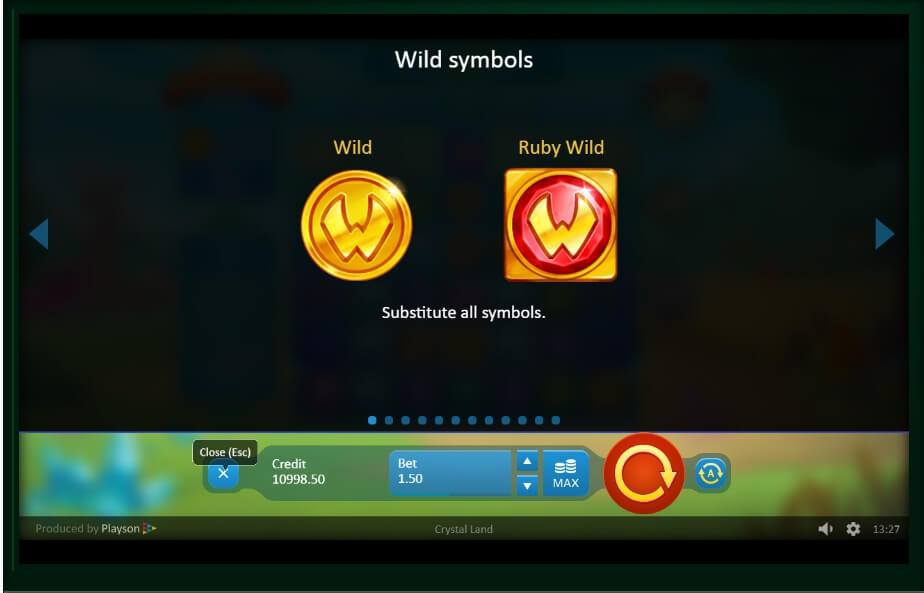 Not so long ago, the Playson Corporation has joined the number of software developers who have released products based on crystals. Probably, each participant had played games in which it is necessary to make chains of the pebbles. After that, the elements explode and new elements appear in their place. Usually in such games you need something to unlock or to reach a certain level. Remember these models? Then you are guaranteed to enjoy the amazing development of this provider. Today we will consider a slot called “Crystal Land”. Each user should prepare for a terrific adventure.

The developers made their choice in favor of a fairly common topic. But this time it was discovered in an original way. Developers suggest going to a fabulous place, where there are valuable crystals that are waiting for each participant. On the background there is a beautiful field, a mill and small houses. This gaming machine also differs in its structure, which has no analogues. So, the playing field is built according to the 7×7 structure. But note that a part of the area is covered with stones, so the user needs to collect combinations to unlock all the cells. After this happens, an additional round is activated, but this option will be described later.
The game was combined with amazing visual effects and musical accompaniment. Developers have executed the interface of this video slot in bright colors that attract all attention. To learn how the crystals are formed, the player needs to visit the theoretical section that opens with the “i” key. The first page describes two jokers that take part in the game. All pictures and their coefficients are described below. The rate (0,20 – 100 credits per line) is carried out with the Bet key or the Max function. Rotations are triggered by the arrow buttons on the right side.

Now it’s time to consider the additional functions that this video slot offers.
-Wild is the joker that replaces usual icons;
-Ruby Wild is another kind of joker, endowed with special features in the prize draws.
-Bomb is an image that explodes the pictures around you.
Some blocked levels are marked with icons. When it is possible to break the ice on these bands, the corresponding bonuses are launched:
-Random Wilds – additional jokers appear on randomly selected cells.
-Random Ruby Wilds – “ruby” jokers appear in different positions.
-Bonus Round clears the screen and fills with new pictures.
Special opportunities are triggered by chains of six or more identical pictures:
– 6+ Combination Bonus. In this case, an additional Ruby Wild appears on the screen.
During the additional level, several chests appear on the screen. They are filled with additional prizes including an additional multiplier.
It’s also worth noting that for travelling the user does not need registration, because the emulator is available in the demo version without additional downloads.