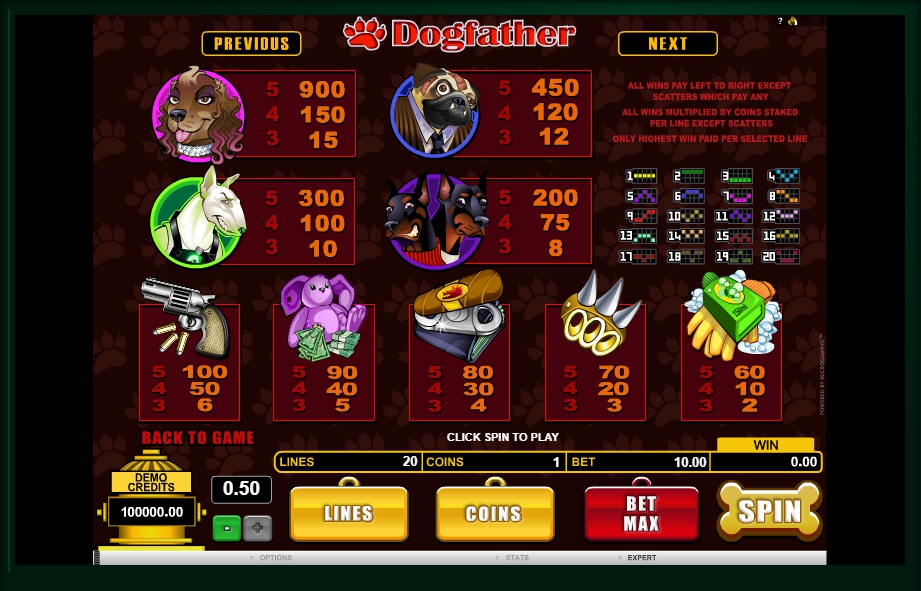 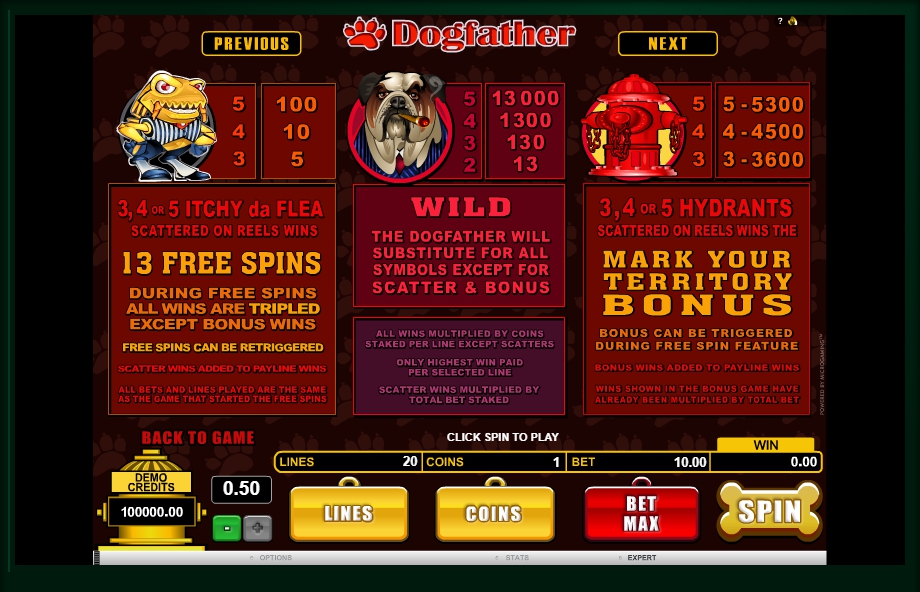 “Dogs are silly cuties, man’s best friends and playful pets” – that’s the stereotype which “Dogfather” slot game will kindly ruin for you. Dogs are dangerous – and that’s not only because of their sharp claws and great teeth in their powerful jaws. They have a spread underground net, where they perform illegal businesses connected with money, weapon and territory. Act carefully when you have your paths crossed with Doggy Mafia – and don’t forget to show your respect to the Dogfather himself.
“Dogfather” is a pun for “Godfather” – a well-known film about crime and Italian mafia. Obviously, “Dogfather” has the similar theme – and that’s much funnier to look after, as soon as all the serious film characters here are replaced with dogs, and dogs are, all in all, cute and funny – even when they have gunshots and brass knuckles. Conquer the streets of the city together with your pack – and get some good cash for that!

As usual, the game starts as soon as you choose the amount of bet money per spin. You’re able to stake from 0.4$ to 50$ overall, that includes 20 paylines, which may cost you from 0.01$ to 0.5$ per coin and from 1 to 5 coins per payline. Done? Then what are you waiting for? Spin the reels and earn money for combos!
In “Dogfather” there are plenty of thematic game symbols, including revolvers, brass knuckles, cigars, stacks of dollars and, of course, different dog breeds acting like real gangsters. There are aggressive bull terriers, dangerous pugs, cruel dobermanns, and the Dogfather bulldog himself. Choose your role in this path – as soon as you started the game, there’s no chance to leave until you win the biggest jackpot!
By the way, the jackpot in “Dogfather” is really huge – when 5 Dogfather symbols drop and create a payline, you are generously presented with 13.000 coins, which stay for 6.500$! The chances to win are fantastically high, and even if you didn’t get such a huge prize, you’re still about to become tangibly richer.

“Dogfather” online slot game is full of surprises and hidden pleasant features. For example, it’s quite impressive to find out that the Dogfather symbol, except being the most valuable “persona” in a game, is also the Wild symbol and substitutes for every playable symbol in many different combinations.
The Scatter symbol in “Dogfather” is represented with water hydrant, which explodes with money when three of the symbols appear on the playboard. They activate a small win-win bonus round, where player’s task is to choose 3 random water hydrants from the bunch of them. Each piece has its own design and price, but you’ll earn money in any case, which can not but pleasure us.
Free spins are available here too! Just try to catch three golden fleas – it’s much easier to do than it sounds. Itchy da Flea, little intrusive bug, will make these reels spin for free 13 times, during which your total score is tripled. Money just won’t stop dropping into your wallet!