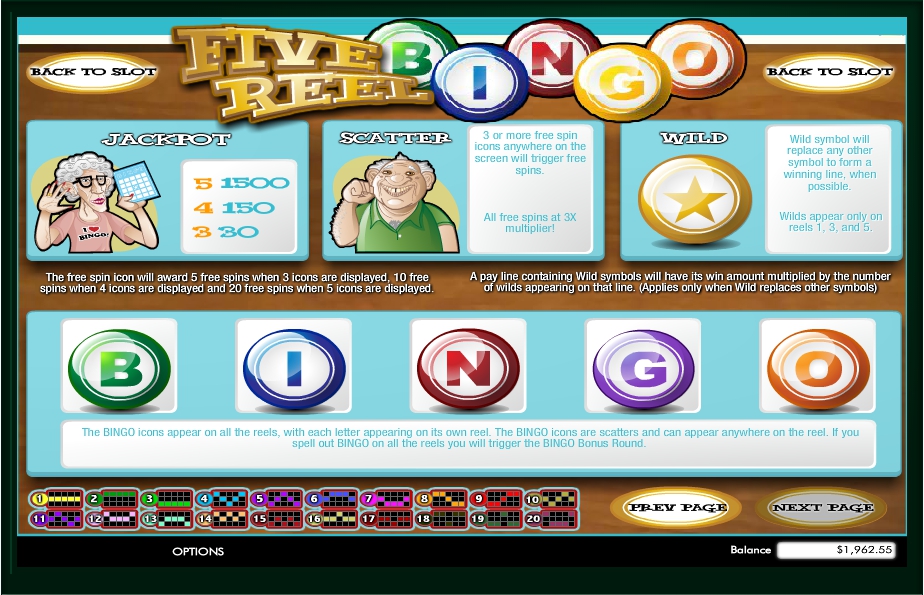 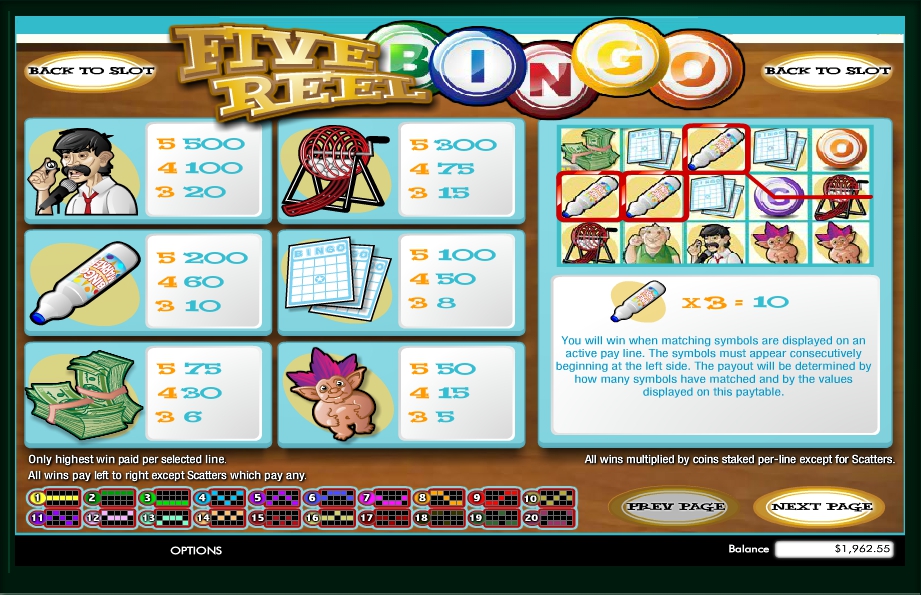 Are you tired of envying your rich friends? Then start playing and win big in the Five Reel Bingo casino. A new game from the creators of Rival forms its plot. The game contains 5 reels. All its symbols are represented in the theme of the Bingo game. Recollect your childhood, playing it. This free slot machine gives you an opportunity to compete for very solid payments and the right to participate in various bonus options. Therefore, it is quite capable to entice any connoisseur of gambling for a long time.

“Bingo” is the slot with five drums. Fifteen pictures, arranged according to the standard scheme of 5×3 simultaneously, appear on the screen. The playing is allowed on the active lines, which amount varies from one to twenty. They are accepted only on an equal basis. You can put up to ten coins with a face value of one, five, ten or twenty-five cents for each position. Accordingly, the maximum bet on the round reaches fifty dollars. The set of the proposed gameplay functions consists of ordinary elements, special characters, fixed jackpot, free spins and additional multipliers. The way of their acting is described later in the review.

Most of the payments that you receive in the course of the game are charged for continuous chains composed of identical pictures. They should line up on one of the involved drums, starting with the first one on the left. As usual, only the longest combination at each individual position is considered to be winning. However, according to the results of the spin, there can be several paid sequences. The calculation of the win is made by multiplying the bet made on the line by the coefficient indicated in the table. For ordinary pictures, it varies from x2 to x1000. The symbol of the jackpot provides the maximum payout, calculated by the multiplier x2500. Existing of several combinations sums the money up. The game is not foreseen for chances, so they are immediately deducted to the main account. Read below on the exceptions to the rules. Data on the level of return, laid in Five Reel Bingo, will be provided later.

The thematic round in Five Reel Bingo is launched with five letters B, I, N, G, O. We will not describe it in details. Let’s just say that it is designed in the style of a video slot, and its rules are intuitively understandable. Therefore, can figure it out by yourself when testing the model. The progressive sum is not played out here. Three, four or five pictures with the old woman, formed on the line combination according to the general rules, give the largest payout in the game. So they can be considered as fixed jackpots.