Fortunes of the Fox Slot Game 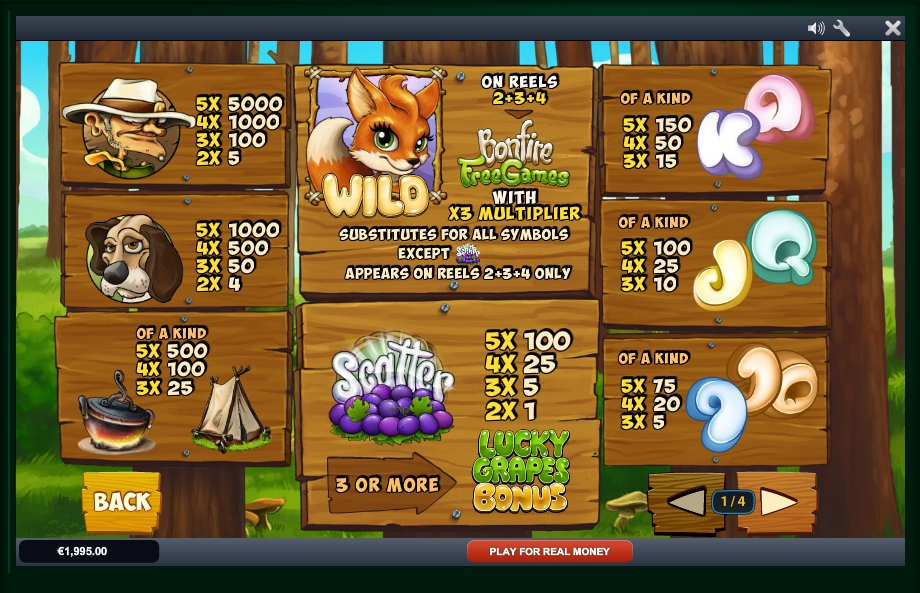 Fortunes of the Fox Review

Choosing the online-game “Fortunes of the Fox”, the player goes on an unforgettable hike with forest animals. The company will be made by the forester and forest dwellers. The player has to collect forest berries, spend the night in a tent and cook porridge at the stake. If a player is tired of the banal topics, as well as the bustle of the big city, Fortunes of the Fox will present relax with nature. Cartoon slot machines are popular among players around the world. They transfer the user into a cheerful and relaxed atmosphere, elevate the mood and give positive emotions.

To support the chosen theme, designers used the image of the forest. Against this background, there were drums with game symbols, each of which was carefully selected. Also here you can see the main character (the red fox). Add to the idyll the sounds of the forest in the background: the noise of leaves, the knocking of an ax of a woodcutter, the singing of birds.

On the screen, almost all the place is occupied by five reels with 25 lines for the game. Under them is the control panel. To start the game, you must select the desired number of lines from 1 to 25. Change the number using «lines» button. After this, you should set the «bet size». If the user wants to immediately start the game on the maximum indicators, you need to use the button “max” for this.

There are other keys. The «info» button will help the player to familiarize himself with the rules, examine the payouts for all images and get acquainted with the prize combos. You can start the reels in several ways. The first is to press spin so that the slots rotate once. If the player wants to just watch the game process, then he can use the «autoplay» button. Also, you can use «turbo mode». The player can independently stop the game at any time and fully control the rotation. In the upper right corner are the personal settings of the game.

The user must collect a combination of the same pictures on one of the active lines. If several payable combos appear on the screen simultaneously, the winnings will be added together and added to the balance. In addition to the usual pictures, on the online-game Fortunes of the Fox there are special images. Scatter – the image of a basket with grapes does not play by common rules.

In order to launch a bonus mini-game, the user needs to find three such pictures. The fox here plays as a wild. It does appear only on the second, third and fourth drums and can complement the prize combinations. If the player has formed such a combination, he can count on an additional multiplier. If three such symbols appear on the central reels at the same time, then free spins will be activated.

The Fortunes of the Fox online-game has an extra bonus tour called «Lucky Grape Bonus». It starts as soon as 3 or even more scatter images are dropped during the main game. The user will see a fox with a bow, from which it will reach the trampoline and prepare to harvest the grapes. The player will choose one of the bunches of grapes.

Fortunes of the Fox Slot Symbols