Welcome to the world of real casino games! There are no complicated plots and no difficult rules, no bonus games and multipliers. Play a game as it is and earn money doing nothing! Bally Wulff decided to make all fans of traditional gambling happy. How can you imagine a union of smart technologies and old traditions? It seems like Bally Wulff Software succeeded in that. Players will see a dark red background in the game with orange lightning. All symbols are shining with a red light. There are unobtrusive sounds at the background that only help players to concentrate better on the game. 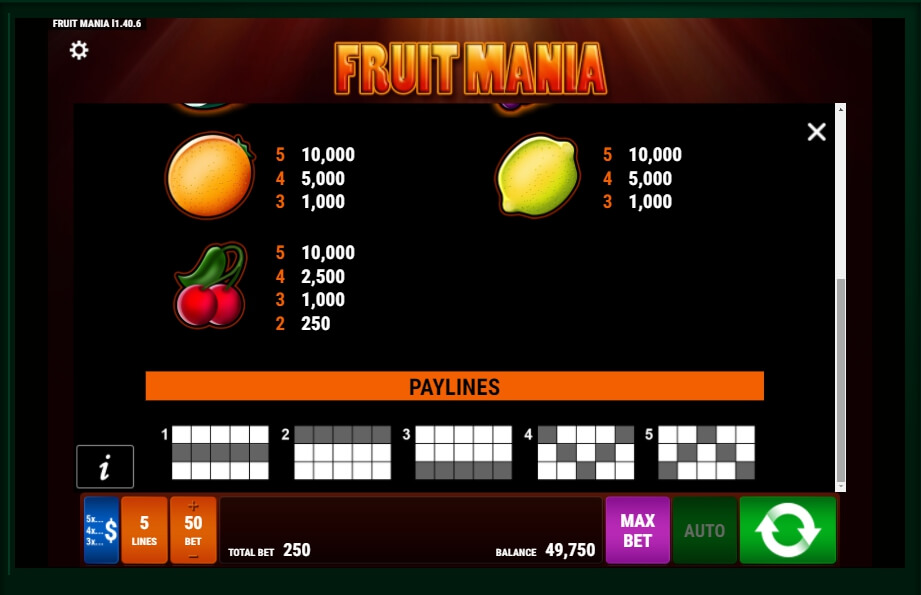 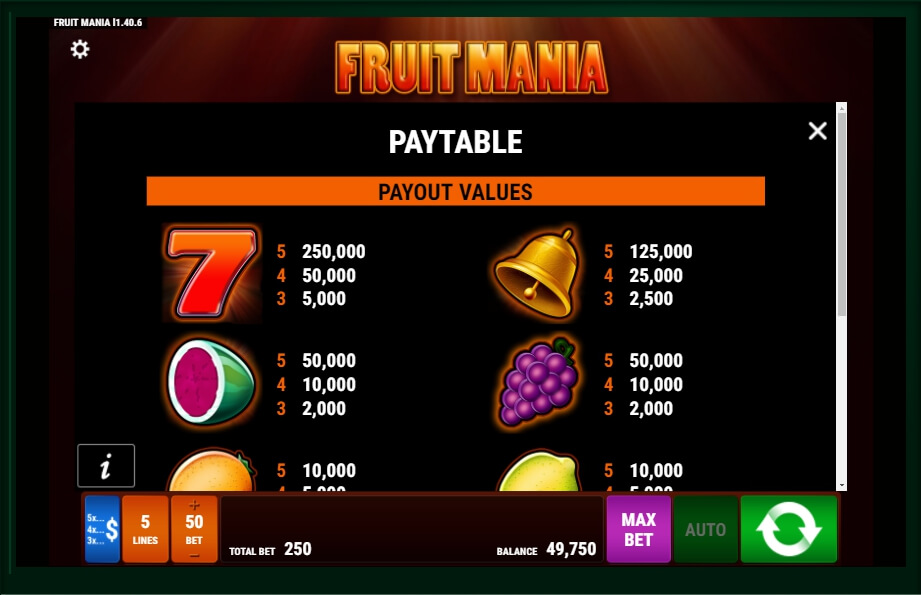 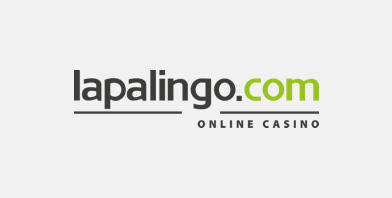 This is a usual 5-reel video slot game with 3 rows in height. Enjoy playing on 15 spaces. In total, there are 11 symbols that appear on the reels one by one. There are 5 paylines in the game. Players can understand how they are placed on the screen in several ways. The first one it is just to take a look at the interface of the game. On the both sides of the screen, players will see small colourful squares with numbers. It is the name of the line and a scheme. Another way to check out the placement of lines on the screen is to press the “Dollar” button on the bottom of the screen. The same button can show up a paytable, where players will see a certain price of every symbol in the game. It is important to check out winning lines and their logic if you want to win real money playing the “Fruit Mania” video slot game. A minimum bet is 50 coins. This is not that small. A maximum bet in the game is 2500 coins per spin. The gambler can set a needed bet pressing “plus” and “minus” buttons on the bottom of the screen as well. There is a 2500 jackpot in this video slot game. The most expensive symbols are 7s. In the amount of five, seven can give the player 25 000 000 coins! The net one is a bell. In the amount of five, the bell will bring the player 12 500 000 coins! A watermelon will give the player only 5 000 000 coins. Other symbols will not be that profitable. Players will be able to switch on the highest bet in the game, pressing the “Max Bet” button.

As we have already mentioned before, this is a traditional video slot game with no super bonus features. There is only one feature that players will be able to turn on in this video slot game – the Autoplay option. It can be turned on manually in the very beginning of the game. Autoplay gives the player a chance to start gambling sessions one by one, not pressing the “Start” button. The “Fruit Mania” video slot game offers players from five and up to 1000 automatically turning on spins. The gambler just has to set a needed amount of repetitions and gamble! The absence of additional options makes this game even better. Players can feel a real pleasure spinning reels with this smart slot.