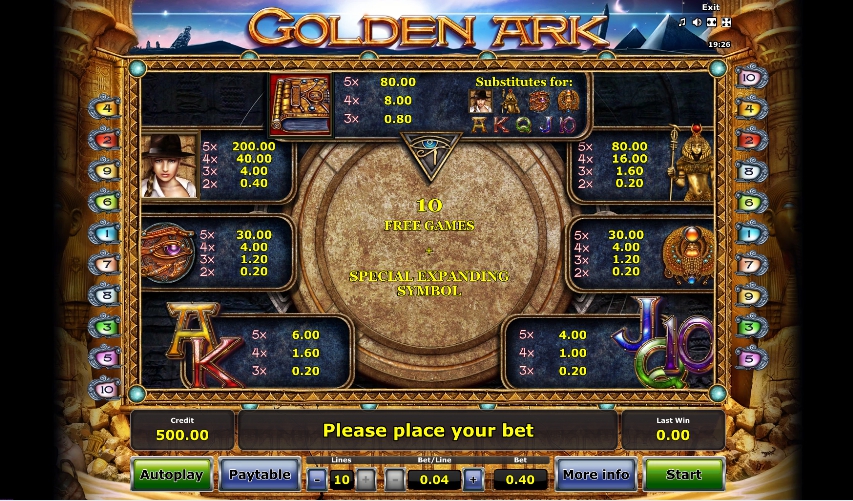 What motivates archaeologists, tomb robbers and adventurers? It is purposefulness, a craving for knowledge and adventures. The main activity of the archaeologist is the excavation with the aim of searching for monuments of antiquity and other historically significant objects. In the online slot “Golden Ark”, any user will feel confident, because, according to the story, he has to go for the treasures of the golden ark with a charming companion. Adventurers on the road will encounter not only a lot of unexpected moments of the game, but also many useful bonus features.

Thanks to the high-quality visualization of the Golden ark slot players will transfer their thoughts to the country of golden sands, scorching sun and mysterious sphinxes. In the background, behind the drums are the only surviving wonders of the world – the pyramids. In the epicenter of the plot will be another location – the tomb of the pharaoh. It is between its walls are located 5 drums, which include 10 lines for betting.

The player before starting the rotation is initially supposed to set the number of active lines. This indicator can be varied to a greater or lesser extent with the Lines button. By analogy, one of the possible bets on the line is put up. When the optimal indicators are selected, it remains to check the Bet window, and you can proceed directly to the rotations of the drums. You can start the gameplay with the spin button or autoplay. The second button starts the automatic game mode and so the user does not get distracted from the plot of the game.

One of the buttons on the control panel – Gamble – will initially be inactive. She is responsible for the transition to a risky round, where the player is asked to bet his newly won prize. Consequently, and access to it appears only when receiving a win. The essence of the tour is to guess the color of the suit of the playing card, and the reward is the doubling of the prize.

Bonus game of Golden Ark slot-machine includes many advantages. So, the player will be given the opportunity to make 10 rotations of the drums without making a bet. For the time of the bonus round, the arsenal of symbols of the Golden ark machine will be supplemented with one more special element. Before the free spin round starts, the system randomly chooses one of the ordinary characters of the game and gives it special functions.