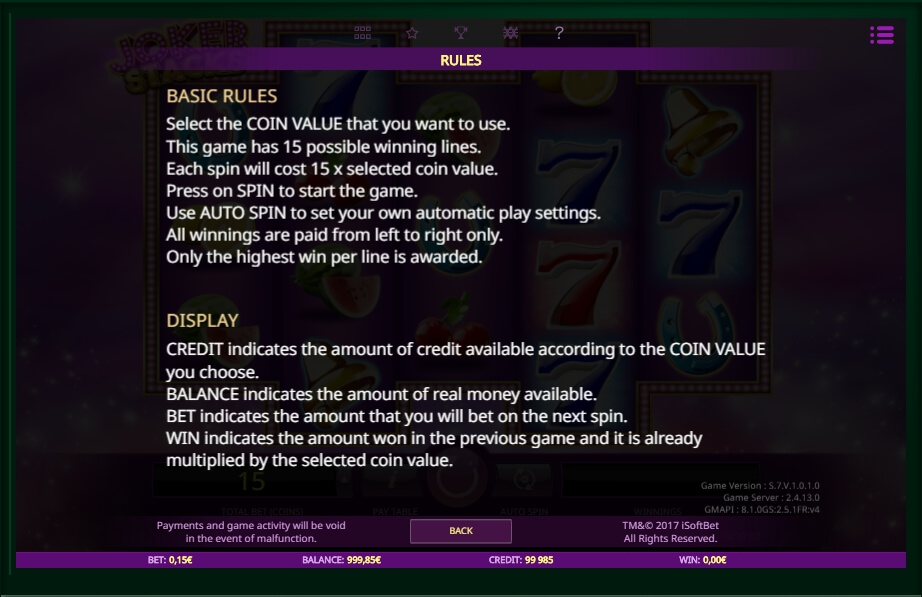 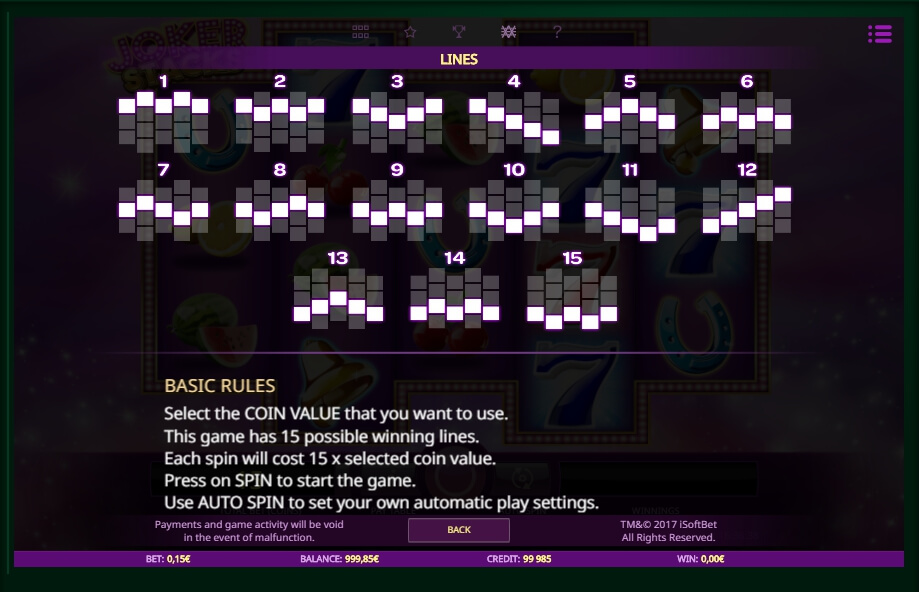 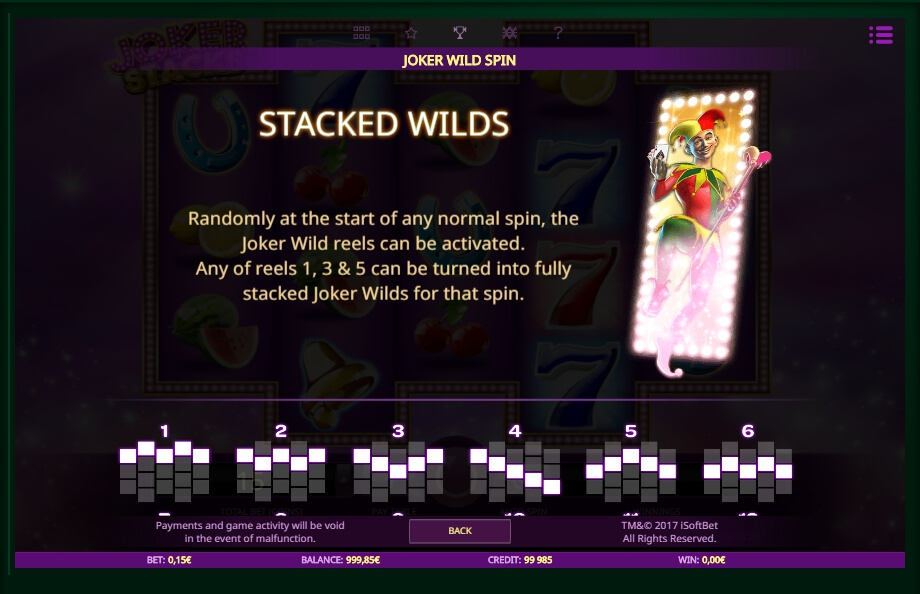 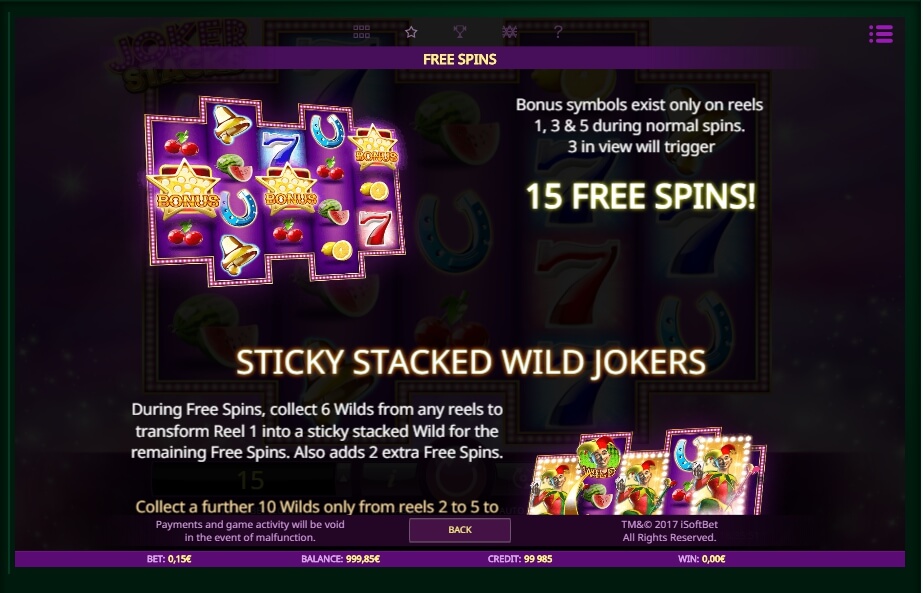 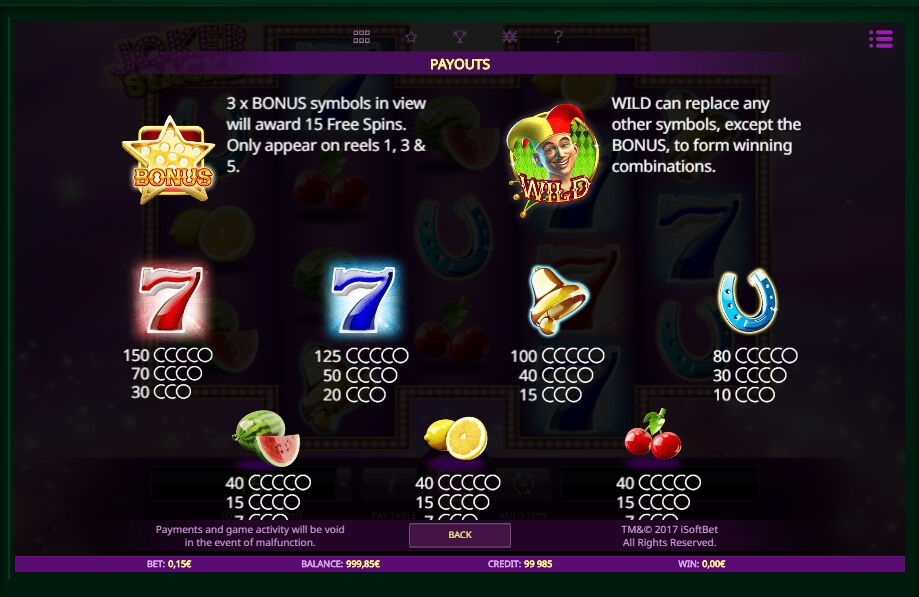 Welcome the new colorful video slot game. “Joker Stacks” is another video slot machine of the third generation that will give players not only pleasure but also a lot of money. The iSoftBet Developers have created a purple plain background and contrast symbols to make this slot machine extra attractive for players. Light sounds on the background can help the player concentrate better on the game itself. Players don’t have to complete registration on the website of the trusted online game portal. As well as there is no need to download this slot on the personal computer.

This is not just a classical video slot game. It is something several times more interesting and nice-looking. Players will be able to see there five reels and three or four rows in height. The first, the third and the fifth reels have only three rows in height. The second and the fourth reels have four rows in height. Such an interesting placement of reels can make this game super exciting and interactive. Just press the “Start” button once and you will risk earning fortune in several seconds! There are 15 winning combinations in the game, in total. To check out their placement, players have to press the “Paytable” button. It can be found on the bottom of the interface. All lines are fixed and players can’t choose an optimal amount of winning combinations they want to play on. Players can either bet on all lines in the game or stop playing the same moment. The Autoplay option is also available. Just press the “Start” button and you will be able to choose an optimal amount of automatically turning on spins of reels. Run gambling sessions one by one and play with no pressing the “Start” button. The minimal bet in the game is one cent per one line only. The maximal bet is ten coins per one winning combination. Players can regulate the bet, pressing the “plus” and “minus” buttons on the bottom of the interface. There is the 2 25 jackpot available in the game.

Play with wild symbols and get several times more money during one gambling session. The wild symbol can be found on the first, the third and the fifth reels only. Wild is a joker himself. If there is only one wild symbol in the game, the player will get symbols on the same winning combination replaced with more profitable ones. The wild symbol will just put more expensive playing icons instead of those lines that lay on reels. That is why wild symbols can quickly increase fortune several times. However, one wild will be not that profitable as three or six wilds. Three wild symbols can turn one reel into the wild one. Three symbols on that type will become expanding quickly and give gamblers as many winning combinations as possible. If there are six wild symbols in the game, players will see a bonus game activated. During such a bonus round, all reels turn into the wild ones and start spinning extra quickly. Moreover, players also can get 15 free spins and play with no additional bets.