Welcome to the jungle! Are you ready to visit the jungle queen? This adventure will be unforgettable for you for sure. The GreenTube Software company made another video slot machine for gamblers who like gambling with high-quality video slot machines. On the background of the game, you will be able to see bright green jungles. Among symbols, you will be able to meet the queen of jungles, wild animals and bright playing symbols at the same time! The high-quality graphics and animation in the game will help you concentrate on the slot machine better! 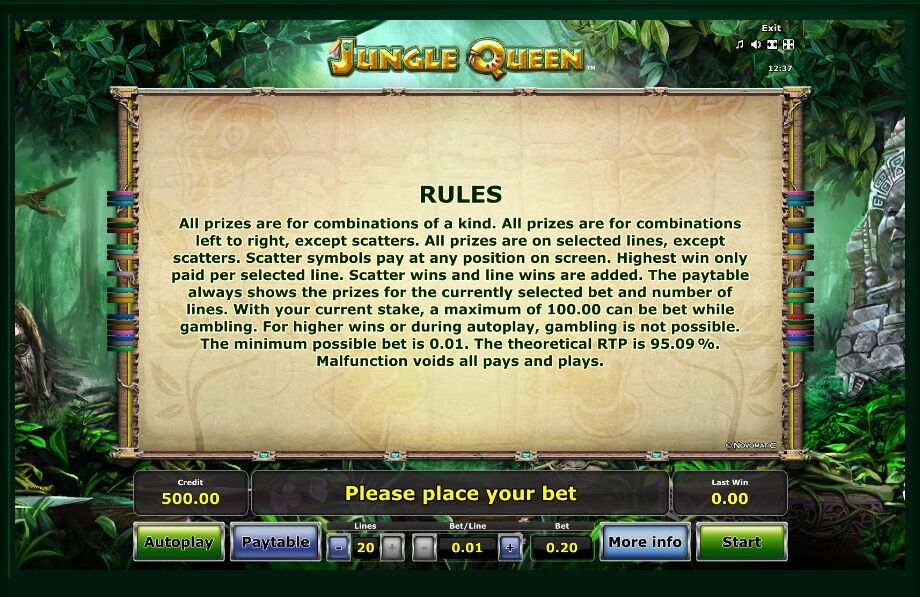 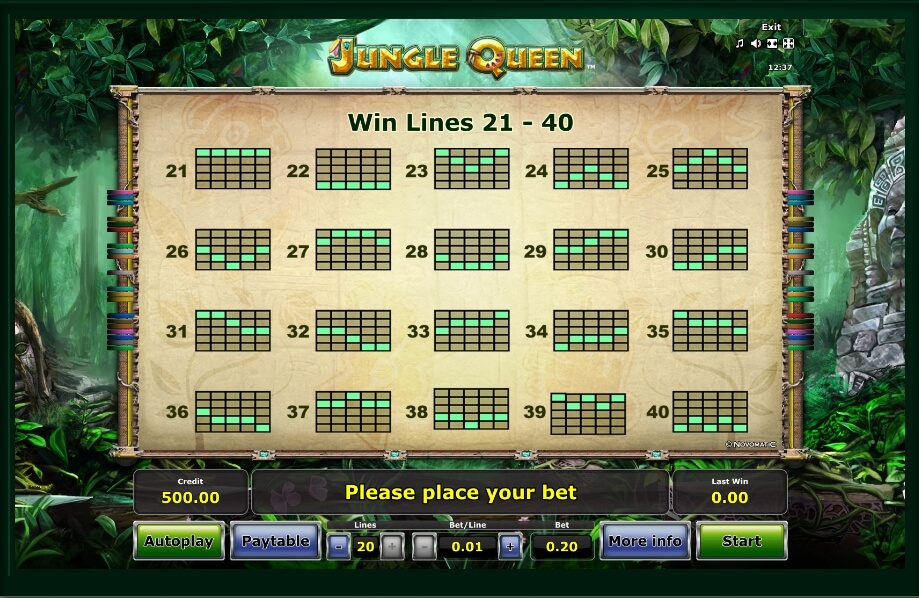 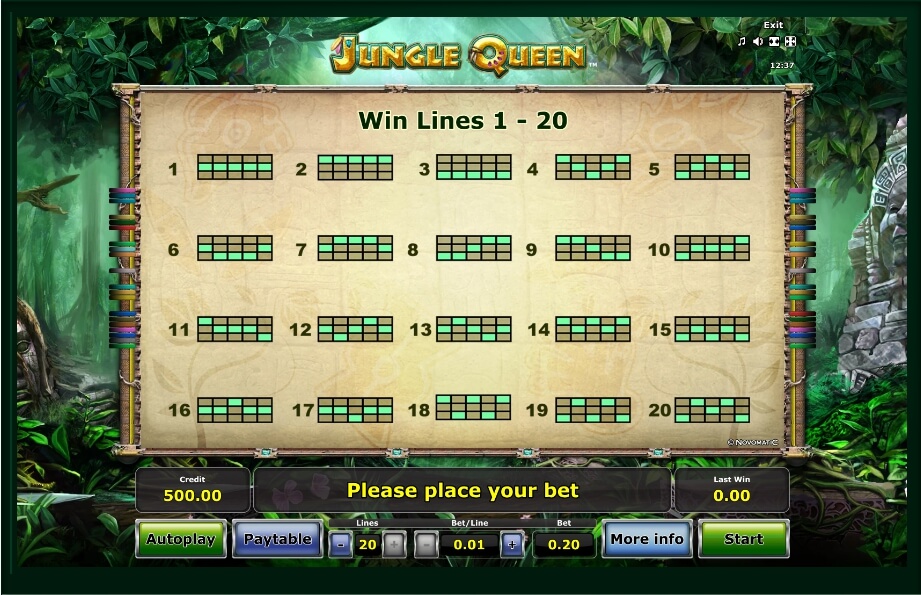 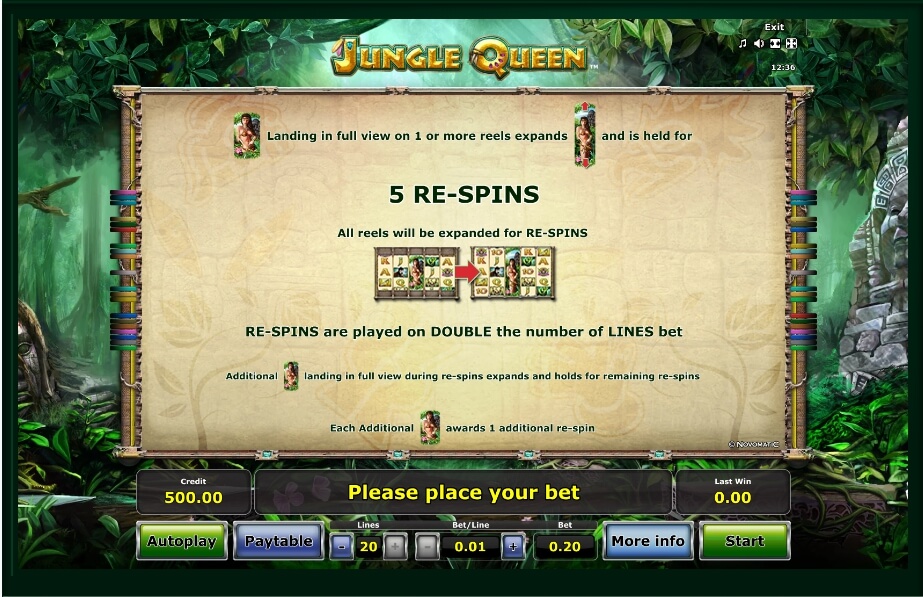 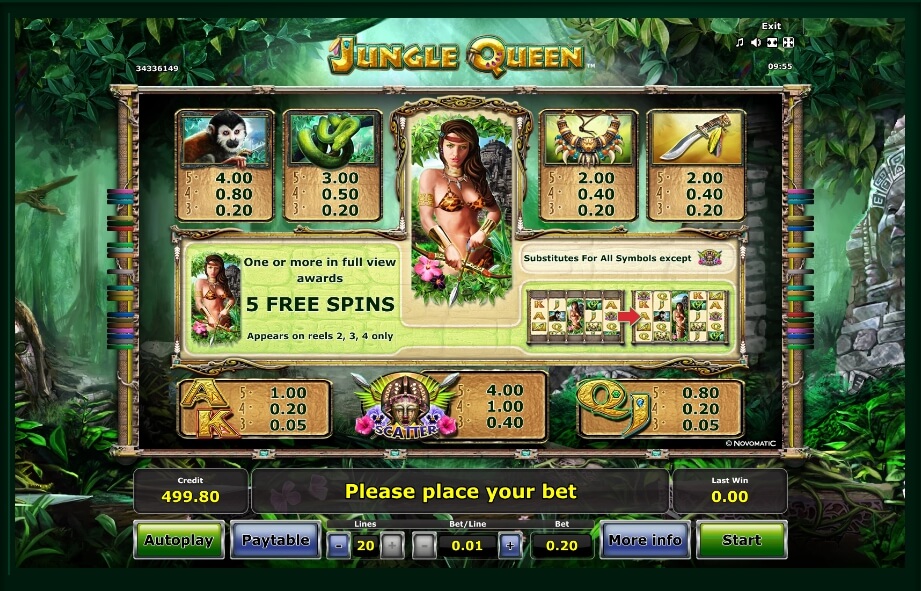 As a smart video slot game, Jungle Queen can be played in the several modes. The first one is a full version of the video slot game that can be played on the personal computer. The second version of the game is a mobile version that you may run right on your tablet or smartphone in the great quality! There are five reels and three rows available in the game. They form a grid of 15 spaces on the interface and can help the player catch all possible winning combinations quickly. With 25 available lines in Jungle Queen, it will be easy to win the jackpot with no odd moves. The amount of lines in the game is not fixed and can be changed manually. Press the “plus” and “minus” buttons on the bottom of the interface and choose the amount of winning combinations you want to play with!

Jungle Queen is a super interactive video slot game with a scatter or a wild symbol, mixed in one playing symbol on the screen and with a great set of free spins in the game! Activate the free spins, gamble with an expanding wild symbol and earn real money playing the bright video slot machine easily. From the very beginning of the game, you will be able to meet the jungle queen. As it is a video slot machine about her, she is a main character in the game at the same time. The jungle queen can be met on the second, the third and the fourth reels in the game. She appears on the screen accidentally and can replace all other playing symbols with more profitable ones. First of all, the jungle queen can put more expensive and profitable symbols on the place of ordinary playing symbols. Moreover, this symbol can also change symbols to help you get a winning combination complete. And when the wild symbol is expanding, your chances can get the greatest reward increase quickly as well as it covers all the reels itself! The jungle queen is the scatter symbol at the same time. It can be met on any reel in the game and start working only if there are three and more symbols like that presented in the game. Three scatter symbols can activate 15 free spins, while four scatter symbols will turn on 20 of them and five scatter symbols will activate 40 free spins. During such a game you don’t have to pay for a spin and can gamble for free to your satisfaction!