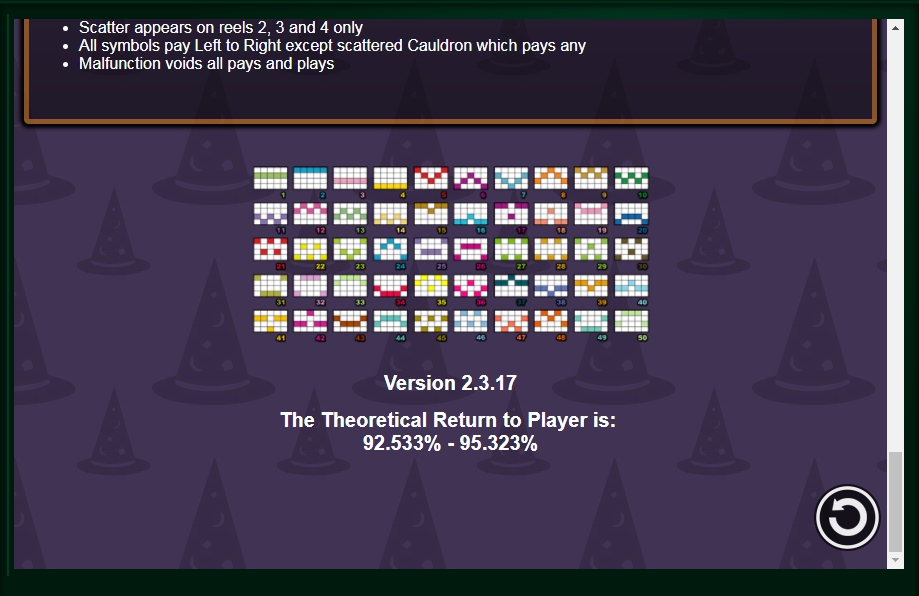 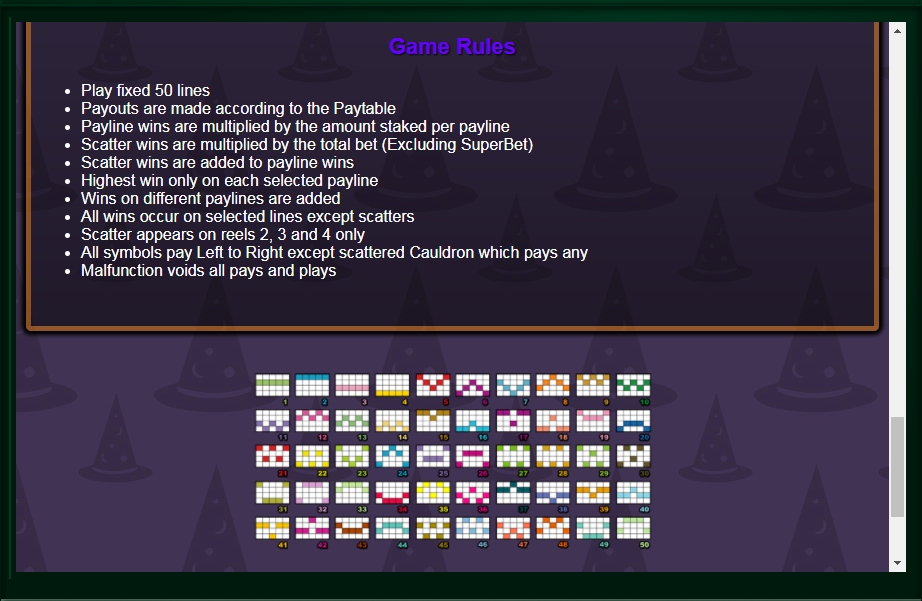 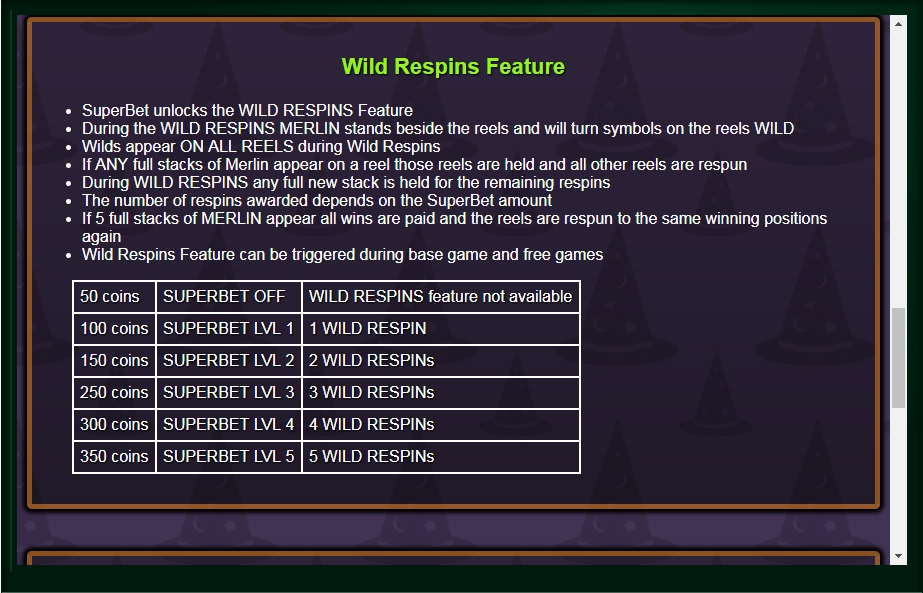 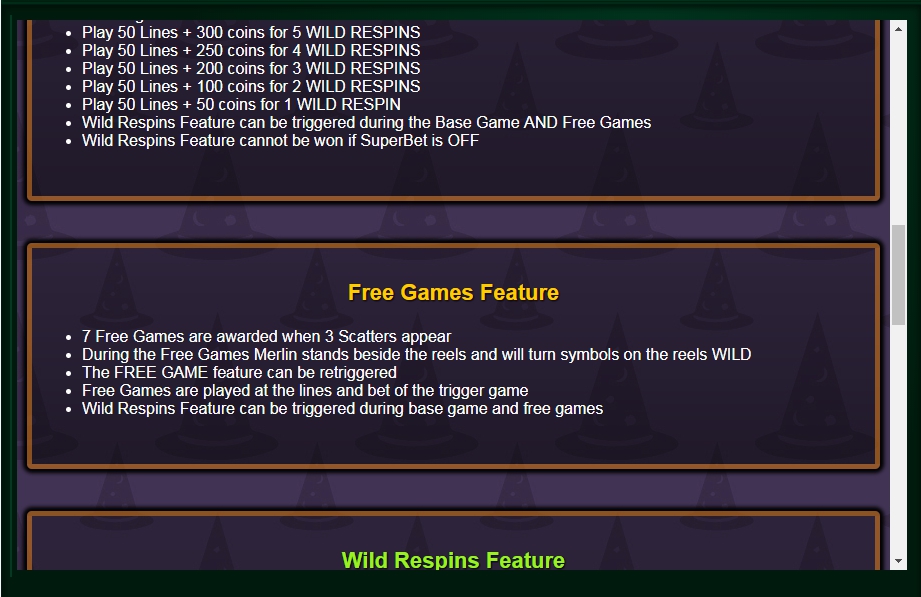 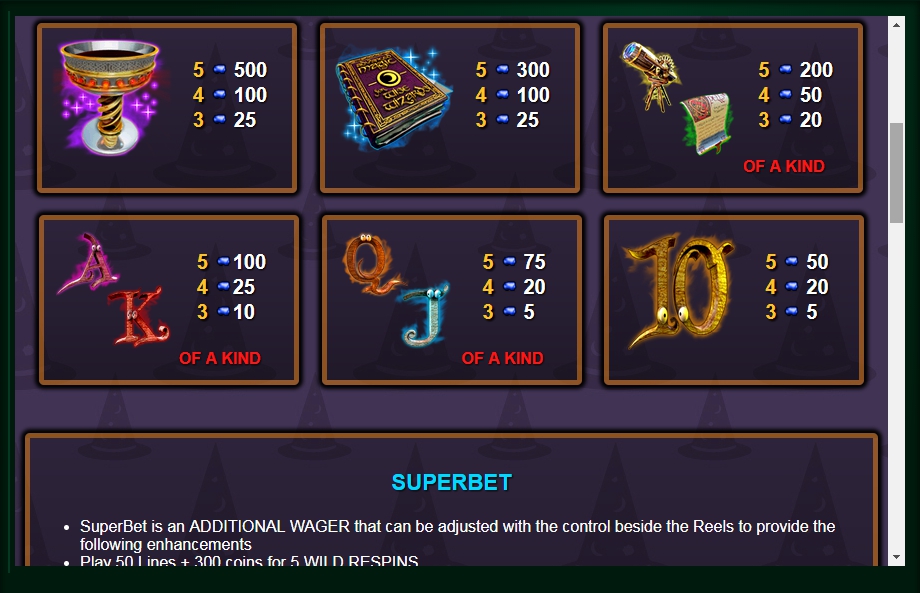 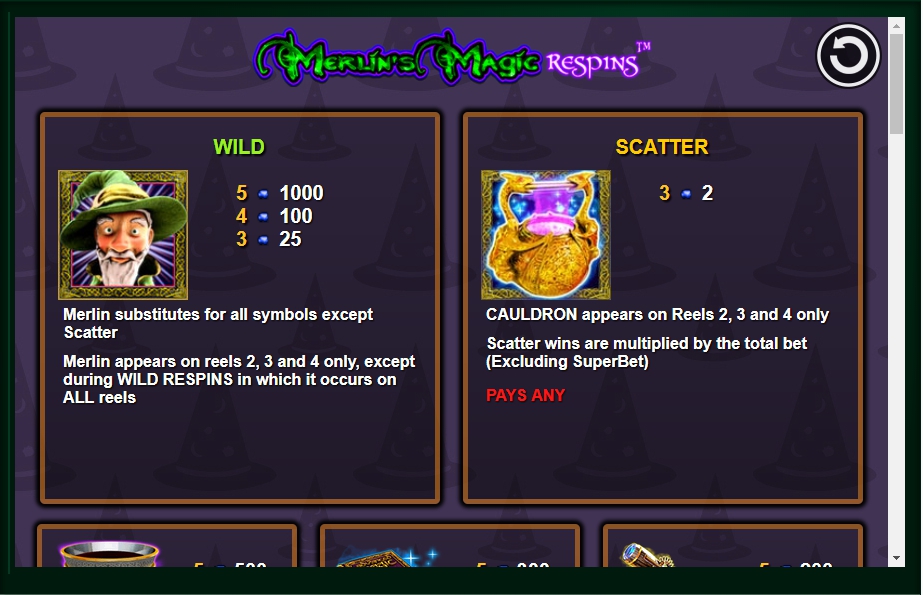 Merlin’s Magic Respins online has five reels and fifty paying lines. The NextGen Gaming developers were inspired by the story about King Arthur and his fellow friend, Merlin. However, a funny thing of the game lies in its actual being a sequel to Merlin’s Millions project, produced by the same creators because of its extreme popularity among players. Even a gaming reel is conceptual. The game designers represented it in the form of a magic chamber, where the main character, a great wizard, stands at the left part of the screen.

Just like most of the modern games on the Web, Merlin’s Magic Respins casino has a portable version for mobile phones, tablets and laptops. To provide a proper experience, the developers adapted the game to different screen sizes. User interface perfectly fits to all the touch screen controls. You will have the same high quality experience, just like in the case of its desktop version.

However, if you aren`t acquainted with the game yet, the creators added a free trial version. It gives you an opportunity to try Merlin’s Magic Respins out, and exactly understand your feelings about it. You will get everything from the original game, except the opportunity to earn money. Nevertheless, if you want to do that, then sign up on website and you will be ready to start.

You can’t help the protagonist without customizing your own character. To do that, use a special section right down the gaming reel. All the major options are represented as potions and other chemical or mystery stuff. You can even find the King Arthur’s sword, just looking closely. To increase or decrease the coins amount in your bankroll, you can use “Up” and “Down” arrows on the left. They can adjust a level of risk with every bet you make. If talk about the “Heart and Clubs” option, it relates to a special gambling mode.

For those gamers, who want to make the thing a lot easier, it is possible to use the special arrow, circling the “Autoplay” plank. This function gives you an opportunity to do nothing and earn money. The game itself will make the bets on each line, you only need to check stats from time to time. After all these manipulations, the gamer can start playing by spinning the reel. However, you can also use another function in case of a jackpot mini-game – “Super Bet” puts a maximum amount of money on every line. It comes in handy because you don’t have to bet step by step, you only need to click on it and the game itself is ready to bring you the win.

Merlin’s Magic Respins no download has simple rules – you just need to collect matching lots on the same line. All of them are represented as magic items from the main character’s laboratory. Combine at least three similar object within the same row and you will be ready to get bonuses and increasers. For example, if the player gets three spell books, it provides a chance to re-spin the reel. However, in case of collecting five Merlins on same line with the “Super Bet” option, then you will have an opportunity to win a jackpot that reaches one thousand coins.