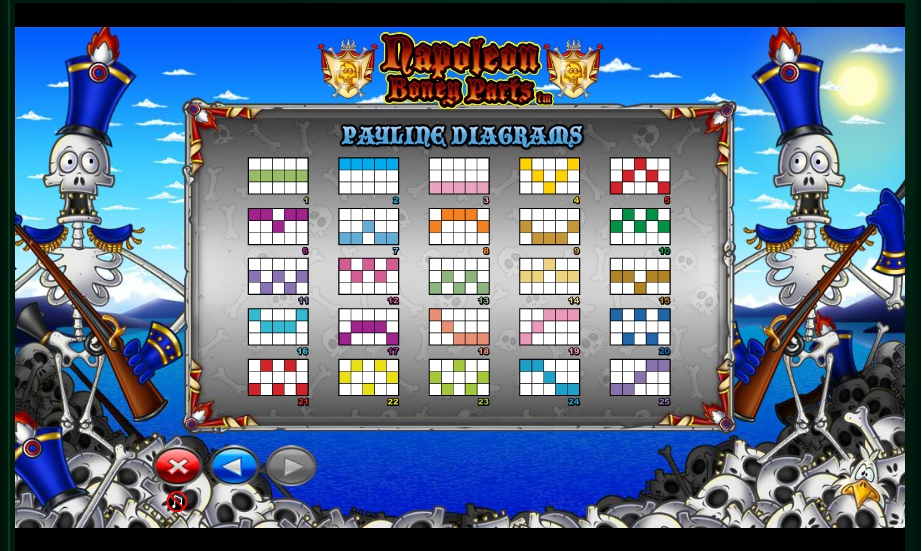 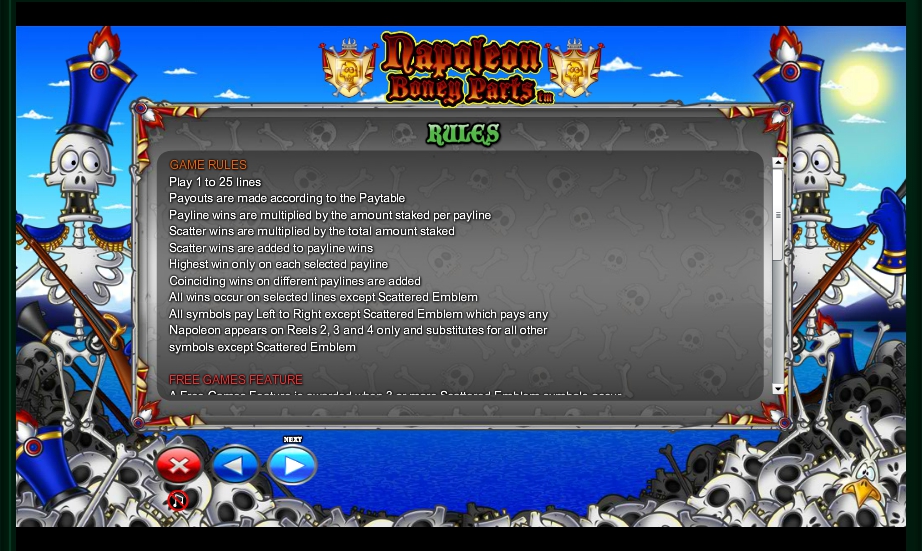 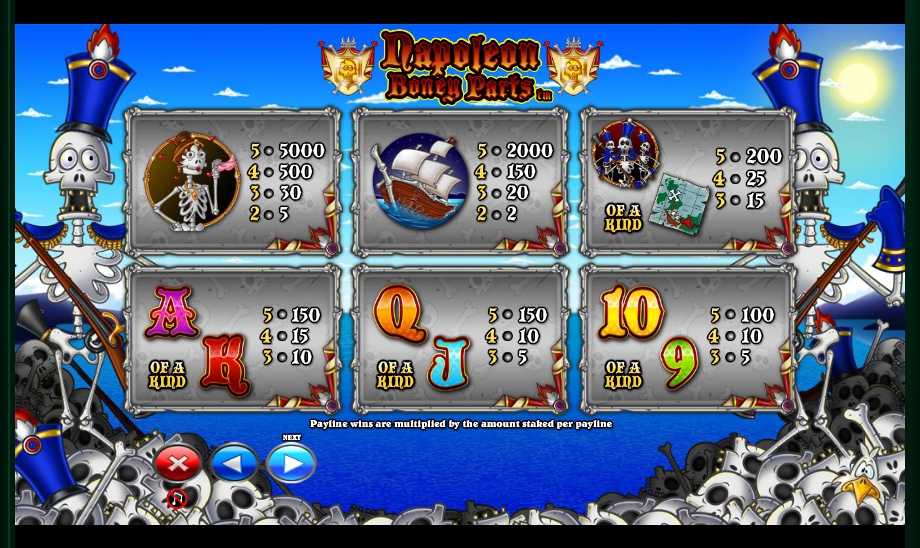 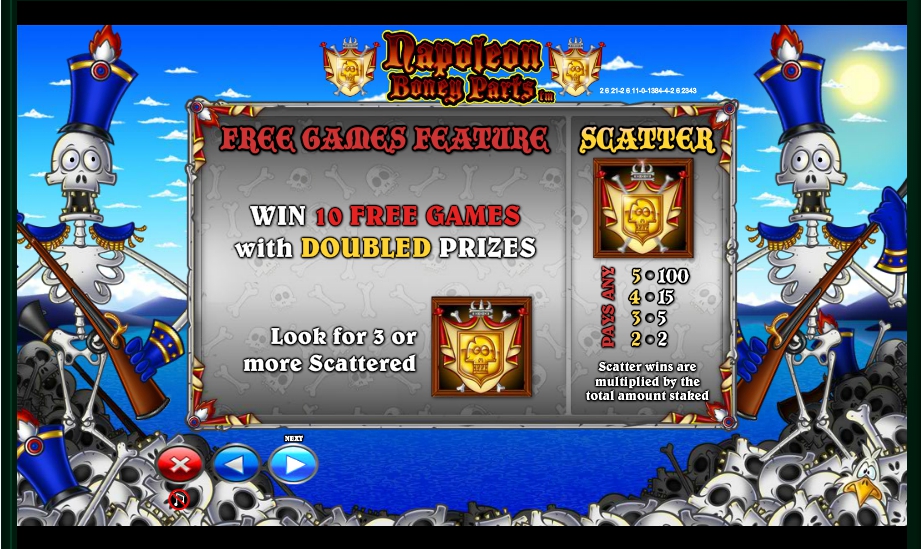 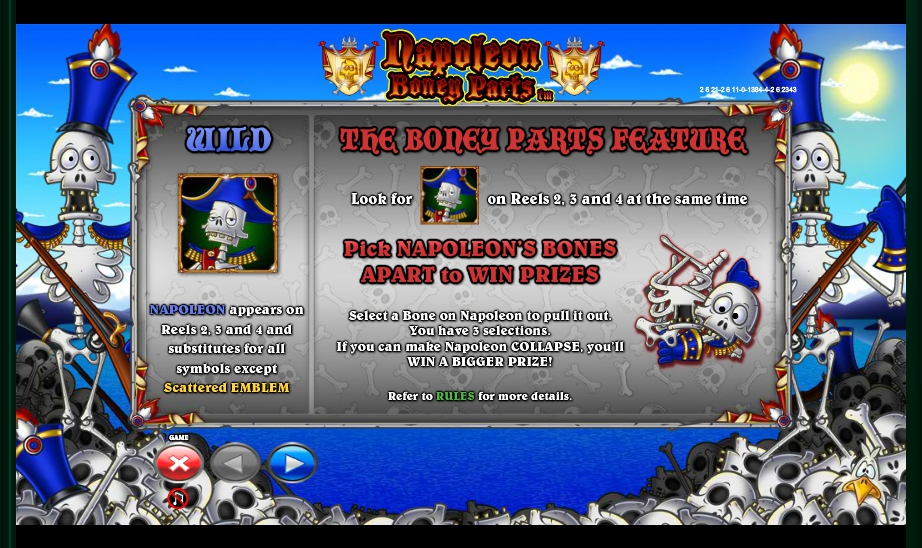 The Napoleon Boney Parts online video slot machine by the NextGen Gaming is a parody of the great and mighty emperor Napoleon and his invincible army. The future emperor chose a military career. In the title of captain, in 1973 he was sent into a siege by the English-occupied Toulon, and there Bonaparte first showed his military genius. He had prepared a unique plan, according to which the city was quickly released. For this Napoleon was appointed brigadier general. Later, he could excel again in the suppression of the monarchist uprising in Paris. Produced in the commanders-in-chief, Napoleon received an army and went to Italy, where he successfully defeated the combined forces of Austria and Italy. His numerous military campaigns to Europe brought him the greatest glory. Emperor Napoleon and his generals were in glory throughout the Old World. However, the campaign against Russia became fatal to the French emperor. In 1812 the troops of Napoleon were defeated and expelled from Russia by the army of Kutuzov. In two years the Allies entered Paris and deposed the emperor. Most likely, this slot is a well-animated parody of the alleged invincibility of the emperor and his army, since the emperor himself and his army are depicted as skeletons.

Five black reels with 25 pay-lines are fixed on the backdrop of the blue sea and sky. The gray control panel has standard control keys and information sections. A circle with a letter “I” provides access to info desk as for the rules and terms of payouts. A small black circle with a musical note is a sound control. Red and gray arrows adjust pay-lines, and red and blue ones adjust the size of the bet. Oval with card suits is access to the Gamble program. A green oval with twisted arrows provides Autoplay mode. A large green key provides normal rotation. At the top, the gambler will notice two black information windows Total Bet and Balance, and under the drum is the Win window.

Skeletons on the reels

The Napoleon Boney Parts slot has an army of skeletons, a ship under sail, a map, letters, and numerals as the base elements. Each element in the winning composition will have its payout. The Napoleon jackpot will be 5000 points. After each victory, the gamer may come in the Gamble program to try to double the winnings in the mini gambling Red/Black. Napoleon is the wild element which pops on reels No 2, 3 and 4. It may replace any element except for the emblem. The emblem is a scatter. Minimum three emblems will provide the Free Spins program with up to 10 free rotations and a multiplier 2X. Bonus program Boney Parts is on if the gambler simultaneously notices the skeleton of Napoleon anywhere on reels No. 2, 3 and 4. During the program on the separate window, Napoleon will rise to a small podium surrounded by his army of skeletons. The gambler should touch any bone on the skeleton to destroy the Emperor. The gambler has three attempts to do it. If he succeeds, the payouts will increase.

How to destroy the emperor for free

The Napoleon Boney Parts slot is an original animation version that reflects the fragile grandeur of the emperor and his invincible army. In this bony Las Vegas, the gambler can destroy this imaginary grandeur of Napoleonic hegemony in demo mode without registration. To destroy the bones of the emperor for free, the gambler ought not to download the slot on any device. The online casino provides with demo coins instead of real money.