Out of this World Slot Game

The BetSoft has released a new slot machine “Out of This World”, which is sure to please most players. This slot is made on a rather interesting topic of space and alien creatures, which is in great demand of the context of gambling machines. Here you have to go on an unforgettable journey to another world, beyond our planet and there to get to know its inhabitants!

Style of this game machine fully corresponds to the proposed topic and to some extent even complements it. Of course, it will help you plunge into the world of excitement and amazing adventures. Each player can enjoy a beautiful realistic design. Amazing graphics, pleasant background music, appropriate sound effects, thought-out details, all this will allow players to have a great rest and get a lot of fun! Starting the game slot, you will find yourself on the main screen, where there are 5 classic drums on which funny characters are placed. Absolutely every symbol of the game is unique, has its own capabilities and certain coefficients. Under the playing drums you will find a traditional informational panel with the balance, stakes and fixed payments.

Play Free Out of this World Slot

Out of this World Slot Game Images 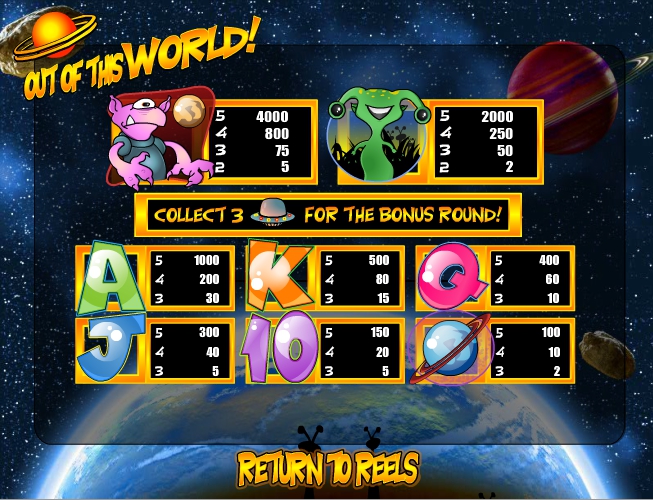 At the very bottom of the display, according to the standard scheme, there is a game control panel. All keys are stylized as small planets. The background of the game is created as the Earth from outer space. The videoslot has a rather fascinating and moderately rich gameplay. In order to start the game you should set the initial parameters, such as the value of the coin (from 0.02 to 1), the number of active lines (but not more than nine) and bets. After that, you can safely start the rotation of the reels and hopefully expect that the winning combination will appear as much as possible. In order to understand a better navigate the game, you need to familiarize yourself with the table of winning combination and the corresponding odds. All keys are stylized for little planets. The game slot provides one bonus game, which is activated when a combination of three or more bonus symbols fall out. This mini-game is very profitable and will allow you to earn certain prizes at any outcome!

The symbolism of this videogame is quite bright and catchy. The generous coefficients that are proposed, combined with the advantageous additional capabilities of some special icons that will fully contribute to the player’s beneficial outcome of each round. So, the symbol of the flying ship will launch a win-win bonus mini-game, where you will have to shoot the flying saucers down, the main thing is, as long as possible, not shoot down a flying ship with a pink aliens, because with this bonus round will be completed!

Out of this World Slot Symbols

Leave a Feedback of Out of this World Slot