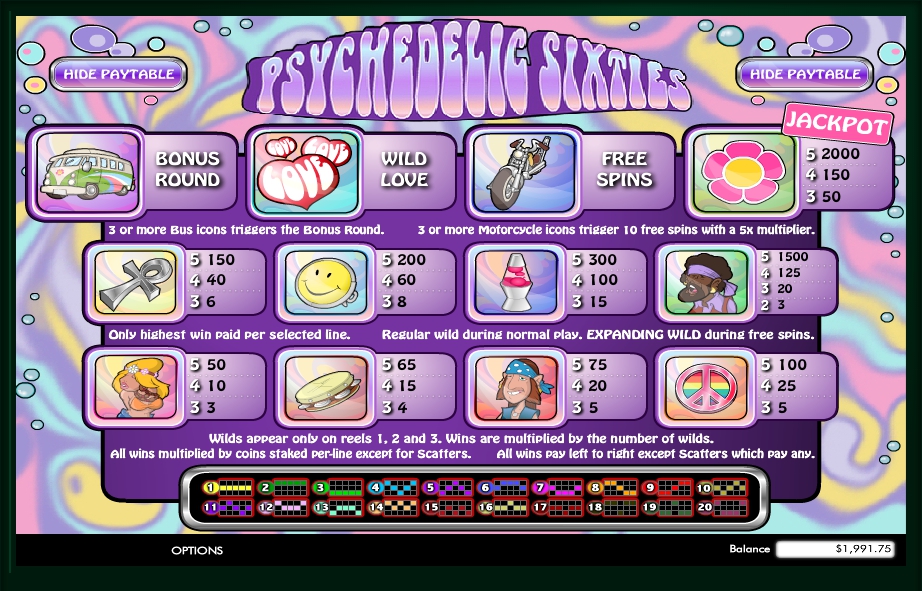 The sixties were the time of hippies and psychedelic rock, an era that left an indelible mark on history and had a huge impact even on today’s generation. The company Rival decided to revive the hippy time in Psychedelic Sixties five-reel slot. Among bright colors and acidic flows, you will find a carefree and pleasant adventure, with bonuses and a bright jackpot. Play Psychedelic Sixties without registration directly with us on the site, or go to the era of jeans flares and bleached t-shirts and play for real money!

The design of the game screen of the Psychedelic Sixties casino slot is made in vibrant and acid colors, depicting one of the main symbols of the hippie era – the tye-dye shirt. The game reels are made in a form of the glossy buttons. Fabulous design is completed with well-chosen music and sound effects, which will help you to plunge into the tale even more. As for the interface itself, it is very simple and convenient, and the game control buttons are familiar to every player:

In general, Psychedelic Sixties gambling machine has standard 5 game reels and 20 paylines, with the ability to put on each line from 1 to 10 coins. The range of rates varies from 1 to 5 cents. Also, the slot machine has the most common recoil factor for this manufacturer’s slots – 96%, which is quite a high figure.

Before you start dizzy with the children of flowers in a crazy dance, you should get acquainted with the main game symbols of the slot. There are portraits of a good guy and a hippie girl, a tambourine, a lava lamp, icons with a smile and specifics, and of course flowers. Also, the Psychedelic Sixties gaming slot has special characters that can significantly affect the gameplay:

In addition, if your journey turns out to be successful and you collect an active line of 5 Flower symbols, then the main prize of a slot with a size of 2000 game credits will not keep you waiting.