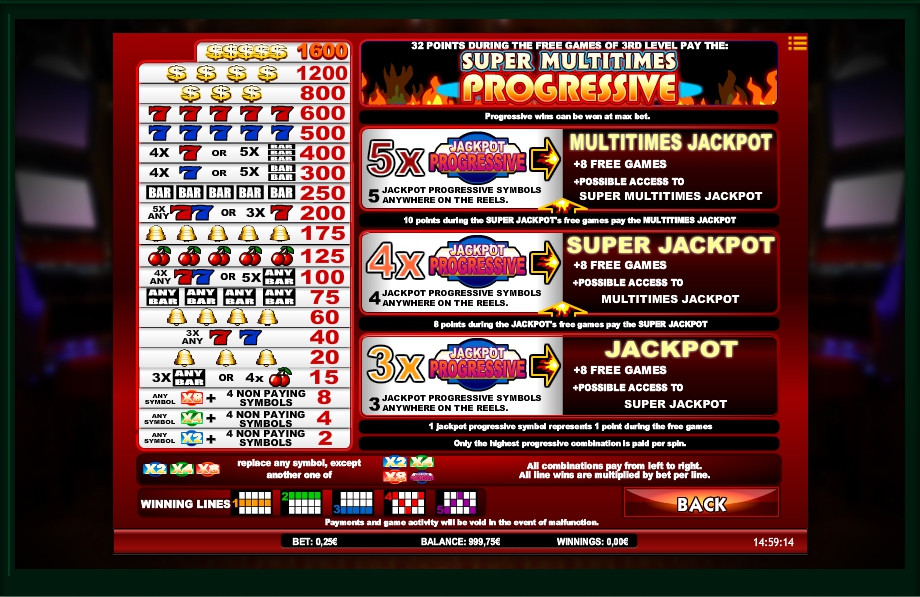 Despite a huge number of subjects and plots used by developers of slot machines to create their models, classic has always been a success. There are many video slots, the graphic design and the structure of which resemble devices that were the first models that entertained gamblers. Each manufacturer of game software considers it their duty to release a machine that will join the category of classic slots. ISoftBet did not deviate from the traditions and also added an assortment of slot machines that are a reflection of the category, but in modern processing. The Super Multitimes Progressive video slot will help to cope with nostalgia for those times when ground-based casino establishments were in sufficient quantities.

The appearance of the slot, namely the frame of the steel color, resembles a mechanical apparatus. The playing field consists of five reels and five prize lines. As in the classic version, in the Super Multitimes Progressive video slot the paytable is directly on the screen. It indicates possible combinations and sizes of prize money. Since a progressive jackpot is played in the model, the scoreboard is located in the center, where its account is maintained. The central part is occupied by drums. Near the first one are the numbers of paylines.
At the bottom is a control panel, a set of functional keys that are familiar to experienced players. Beginners also have no difficulty in understanding their purpose. Several training spins and they will learn all capabilities of the game buttons. BET – bet on the game. The denomination of coins is determined in a small window near. LINES will select the number of playing lines. The maximum contribution to the round is BET MAX. To start the game, just press SPIN. The sound filling of the slot does not have complicated musical compositions. Here everything is simple and concise. The rotation of the drums is accompanied by a characteristic sound. A loud signal will notify you of a successful combination. A nice female voice will tell on the accrual of extra spins.

The peculiarity of the Super Slot Progressive video slot is that winning combinations can be formed from different images. So the profit is calculated for a combination of sevens of different colors. Blue and red numbers can be placed on an active line in different ratios. The same goes for the BAR symbol. The combination can be composed of the same type of signs and a certain reward is supposed for this. If double or triple BAR symbols are lined up in different numbers on the line, then this combination is also supposed to win. The most anticipated is the JACKPOT PROGRESSIVE sign, as it gives a chance to receive one of three jackpots. If a combination of these symbols appears on the reels, then the player is guaranteed to earn eight bonus rotations. But the jackpot is paid quite rarely. Only a real lucky one will become its owner. All sums of jackpots are listed in a special table. Throughout the game, you can watch how they increase with each successful spin. The multiplier symbol is not included in profitable combinations. Your victory is calculated for one character, which can fall on any of the reels.