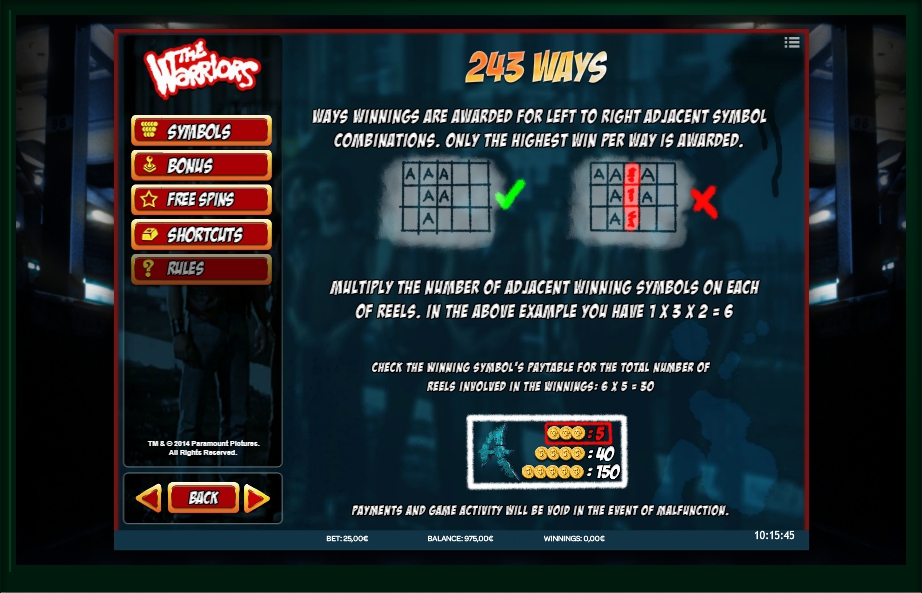 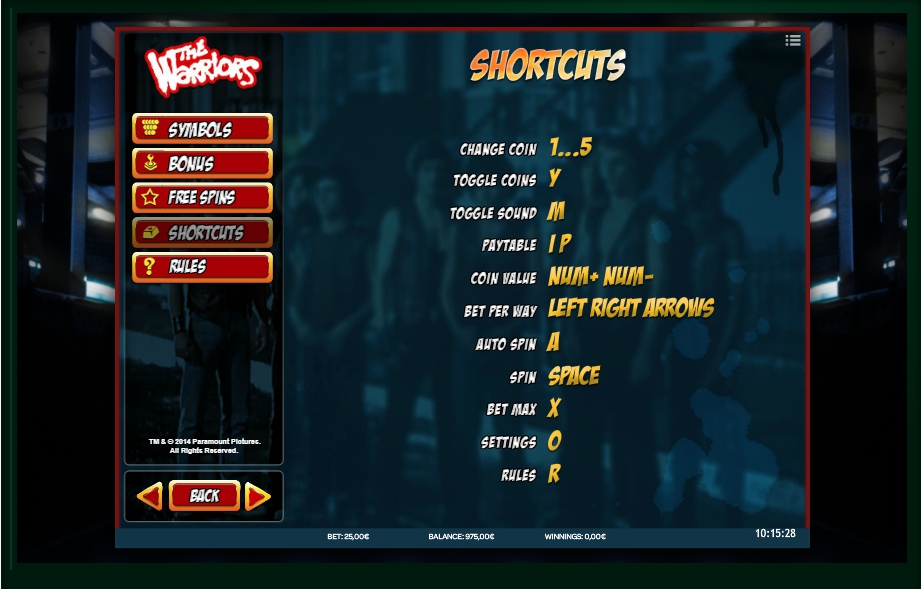 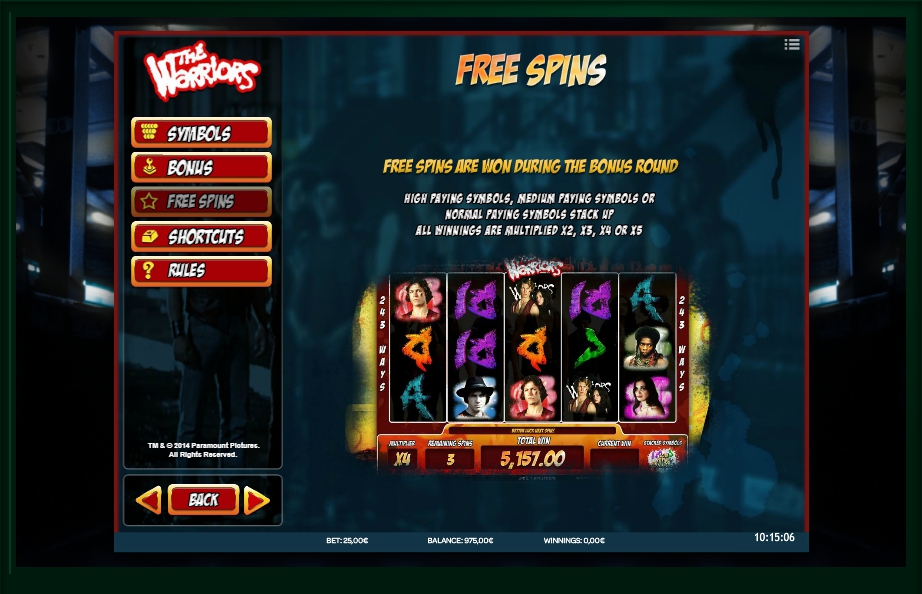 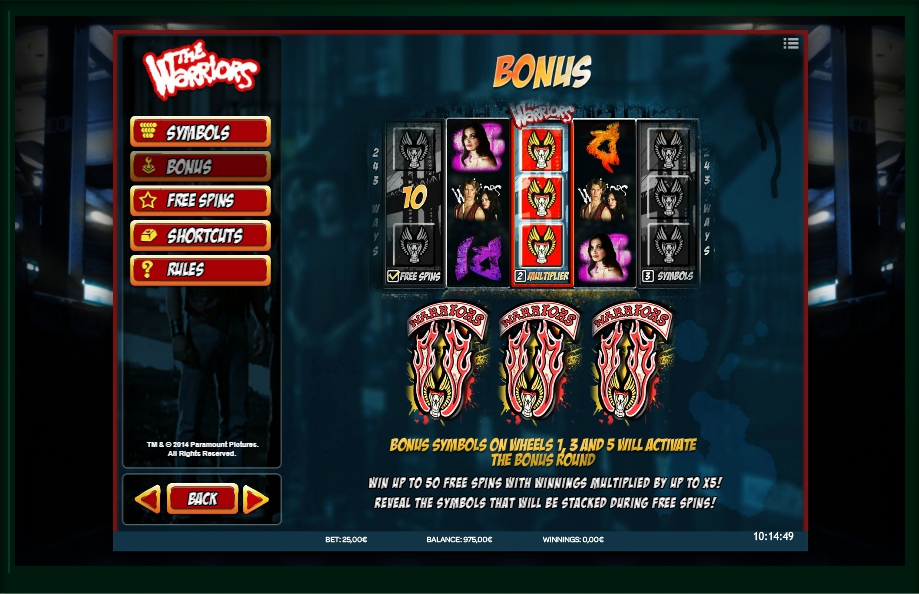 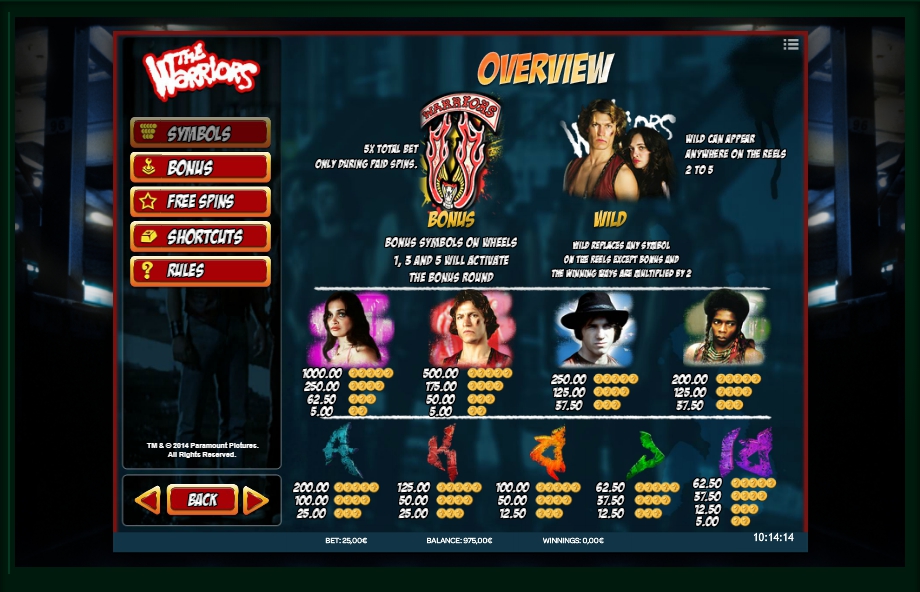 The movie “The Warriors” is the classic of the eighties, being a well-known adventure film about a gang of teenagers. The film is about youth in all its manifestations, about danger, adventure and excitement. The iSoftBet manufacturer chose the movie as the basis for a slot game with the same name not accidentally. The film has received recognition in America and is rightly considered a classic. All that modern youth needs is found in the film.

The surveyed slot became a worthy representative of this subject and received an excellent graphics design. The main characters of the film found their reflection in the graphic elements of the slot. Digital and alphabetic elements are also made in a special style. They are as if drawn on a smooth black wall. By the way, the background image of the slot is a dark subway, lightly illuminated by streetlights. The soundtrack pleasantly effects no melodies, instead of them are the sounds of real streets: the noise of cars, the howling of the wind, the creak of doors, the voices of passers-by.

There are a lot of different keys on the game board of the video slot. With the use of them, the player needs to adjust the gaming process. A button for rotating the reels (Spin) is based in the center of the game panel. On the left, we can see a button to select a bet that ranges from one to five credits. The value of the bet depends on the player. It is possible to adjust it by pressing the button in the right corner of the game panel. Near the Spin button, the Auto Spin option that starts the automatic rotation of the reels is located. A small long Paytable button will open the paytable. The machine features 243 paylines, for which payments are possible.

The Wild symbol is represented as Swan and Mercy, two movie characters. Wild replaces any picture on the gaming field except for the bonus. All wins where Wild substitutes are subjected to a x2 multiplier. This symbol appears only on reels 2, 3, 4 and 5.
The Warriors Gang badge is the bonus picture and it appears on the reels 1, 3 and 5. During free spins, this symbol will multiply all your wins by 5. Once you land 3 of these symbols on the designated reels, you will trigger a bonus game. All you need to do is to reveal the stacked symbols, and you will get up to 50 free spins with an up to x5 multiplier and some stacked symbols during free spins. You can win high paying symbols, medium paying or normal paying symbols that will appear stacked on the reels during free spins.