You can not play this game for free
For free slots game go
Play free
or
(24 votes)
Full screen: Report a Problem: close 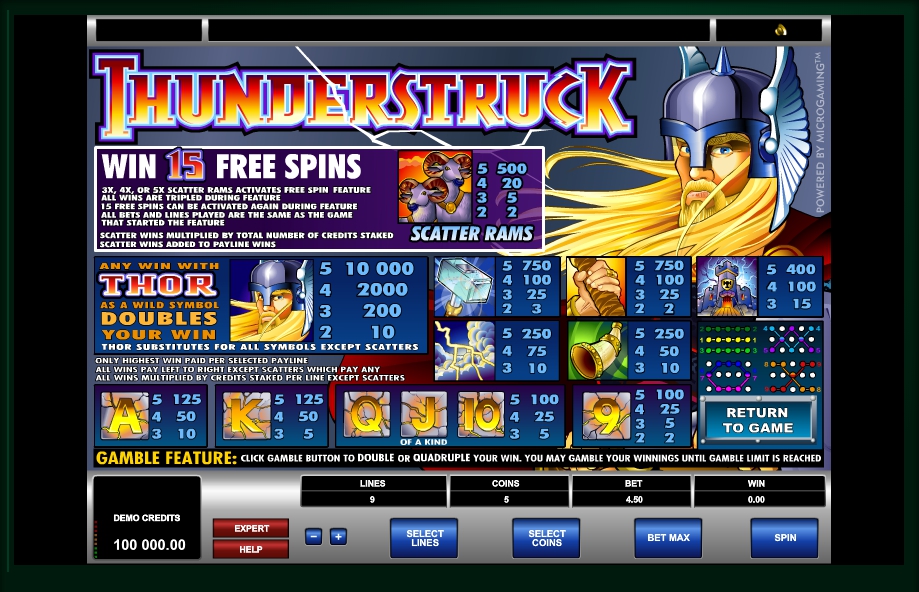 We appreciate the video slots for their unique features and amazing atmosphere. There are many companies in the gambling industry, but only Microgaming has conquered this peak by releasing high-quality and interesting content. In its projects, the provider often uses the Scandinavian myths. Most of them are dedicated to the powerful gods who inhabit the sacred Olympus. A few years ago, a gambling audience received a Thunderstruck video slot that became popular in a few days. It is obvious that the manufacturer had enough reasons for developing and releasing a Thunderstruck 2 video slot which promises an exciting game process with large payouts.

In this slot machine, the participant will meet the supreme god Odin, the cunning Loki, the fierce valkyrie and Thor. Each of these characters appears on 5 reels and 243 paylines to activate the themed bonus round. These surprises will be discussed later, as players need to know how the online slot works. The panel with functional buttons is located under the playing field. Here you will find all the necessary keys that regulate the rate and speed of rotation. First, we recommend visiting the theoretical section with rules, line structure and payout ratios. After that, the player needs to choose the size of the bet (Coins button) and start the rotation (Spin/Autoplay). Thunderstruck 2 also offers several advanced settings that control the volume of sound effects and graphics quality.

Visual design is the main advantage of this slot machine. Thunderstruck 2 is built on modern technologies that involve the use of stunning three-dimensional graphics with additional animations. The character set is dedicated to the Scandinavian legends, so gamers will meet and even fight with the main gods of Olympus. The game is interesting and dynamic thanks to sound effects and a wide range of bonuses!

Wild is your key to success. It appears on the screen to replace simple images when necessary. Accordingly, the number of chains increases and you get additional payments. If Wild participates in a combination made up of other symbols then the payout will be doubled.

Scatter (hammer of Thor) is paid in any position. The Great Hall of Spins is activated when at least 3 such images appear on the screen. The bonus mini-game in this slot consists of 4 halls dedicated to each character. They open gradually, giving the gamer a certain amount of free spins:

Wildstorm is always activated randomly. After that, one, two or more reels are filled with jokers. In one round you cannot win more than 6,000 credits.