You can not play this game for free
For free slots game go
Play free
or
(11 votes)
Full screen: Report a Problem: close 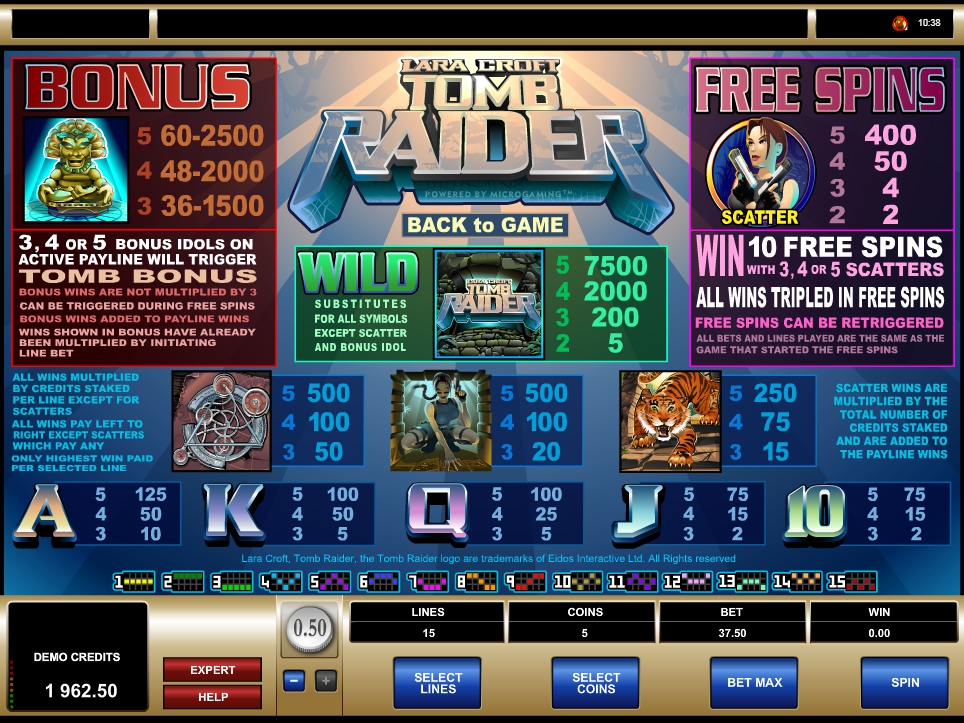 The first computer game from the Tomb Raider series appeared in 1996. The plot of this game was built around Lara Croft, an experienced archaeologist from the UK. She is smart, beautiful and determined. These qualities allowed her to avoid traps and solve complex puzzles. This game was successful, so the developers created several parts of the game. Thanks to Microgaming, this character appeared in a slot machine that offers dangerous adventures and real money to players who have no fear. You will explore the jungle and mysterious tombs collecting combinations on 5 reels/15 paylines.

The slot machine is filled with adventures and grand prizes that will delight all gamers. The developers spent a lot of time to convey the atmosphere of the legendary film. So, the gameplay takes place in a mysterious pyramid filled with riddles and treasures. The video slot has appeared on the gambling market for a long time, but in spite of this it is still relevant and popular. Designers and artists used shadow effects complemented by animations. You will even see 3D graphics that makes the game realistic and interesting. The playing field is surrounded by multi-colored plates with line numbers. Accordingly, they help to monitor the combinations that appear on the screen.

This adventure is accompanied by a dynamic melody that underlines the main idea of ​​the slot machine. If you watched a popular movie then you know that the tombs and pyramids are always filled with traps and to avoid their player you need to visit the pay table. This section contains information about the rules and symbols that appear on the playing field. In Tomb Raider online slot you can adjust all the indicators including the number of lines and the size of the bet. To do this, press the Select Lines and Select Coins keys on the control panel. Traditionally, Spin does one spin while Autoplay activates autopilot mode.

Wild (slot machine logo) forms individual chains on the playing field. By the way, these combos give the biggest payouts. Players can also use Wild as a replacement for standard images that increases the number of payouts. Lara Croft with two pistols is Scatter and two pictures give excellent payouts. But if you caught 3+ such images in one round, then you will get 10 Free Spins and an amazing x3 multiplier. In addition, free spins are extended!

Obviously, Microgaming employees do not like to ignore bonus rounds. In this slot machine, the participant must obtain 3 statues of the deity on the same active line. After that, you will move to a new screen where you need to select several statuettes, each of which gives cash.