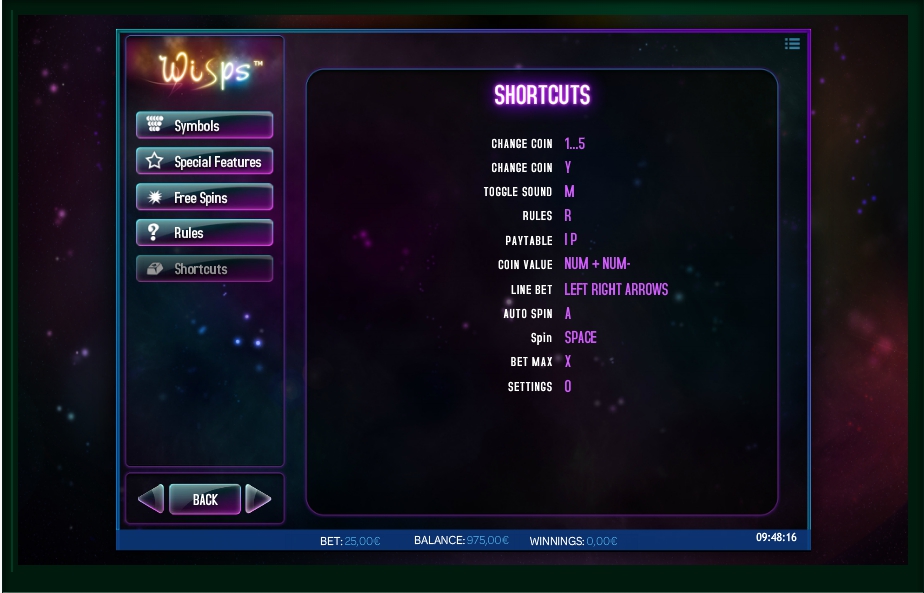 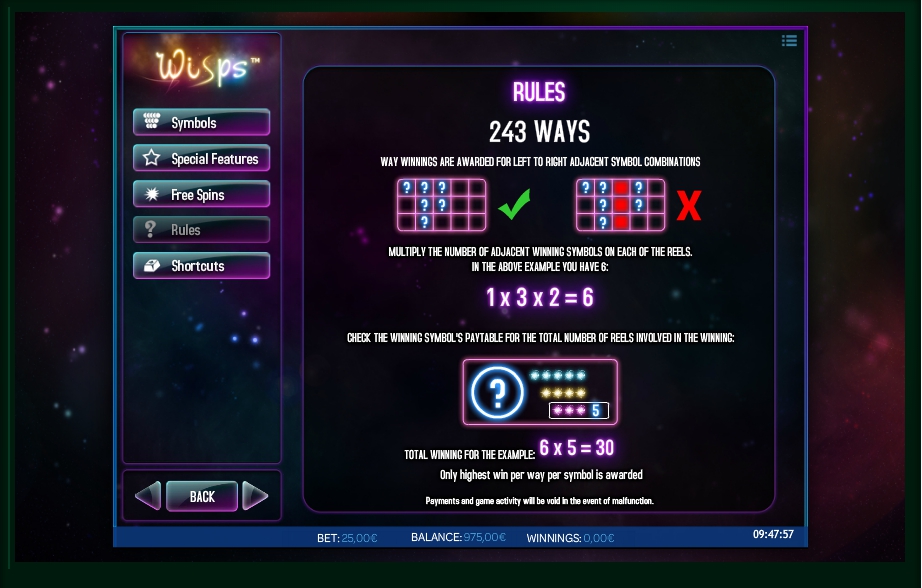 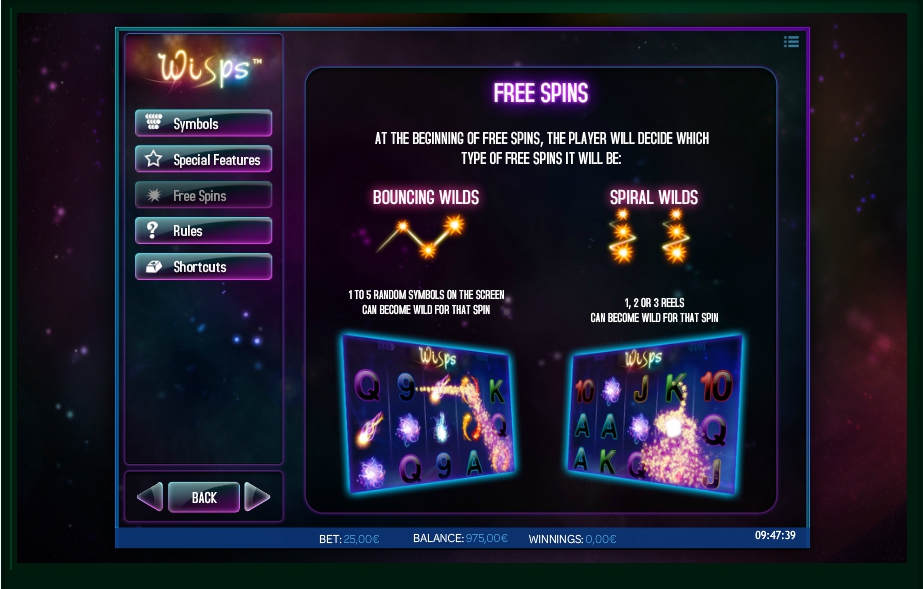 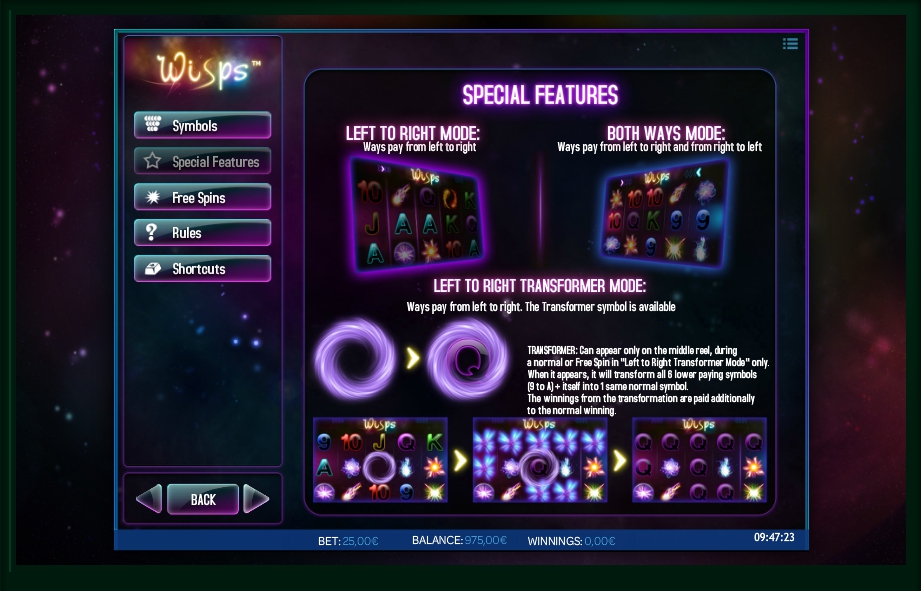 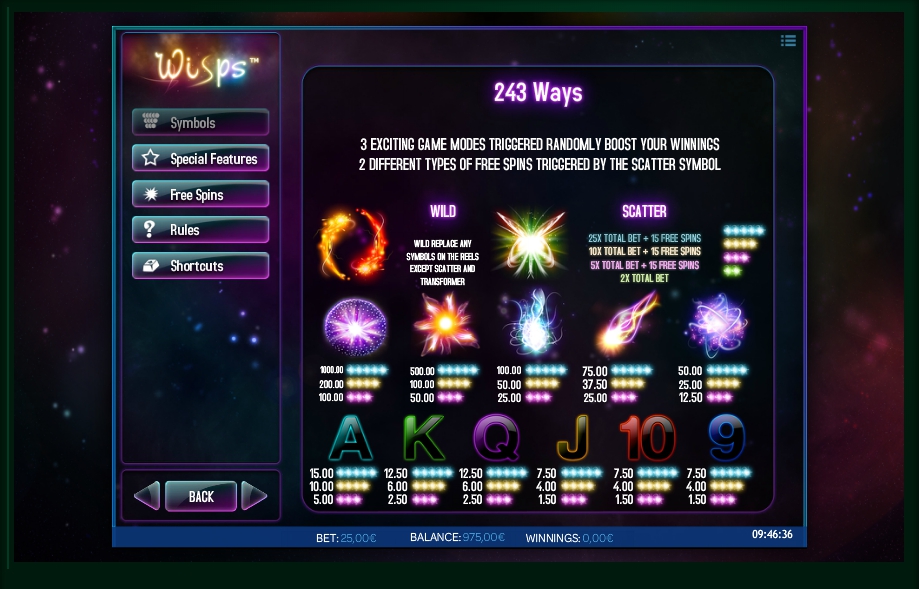 Every person at least occasionally flies away with thoughts, represents how matter circulates in space and discusses the secrets of the cosmos. Of course, the cosmos is inextricably linked with celestial stars – the stars that figure in the course of the game process of this slot. Developers have completely transferred the atmosphere of mystery and the vastness of the universe. Wisps is a slot that offers not only to make a virtual intergalactic journey, but also to think about the limits of human capabilities.

So the background image of the Wisps slot from the iSoftBet manufacturer is, of course, a space starry landscape. It is executed in muffled glowing tones, among which shades of violet predominate. The main symbols of the game are the stylized luminous stars, the logo is painted in the style of light graffiti, which brings the videogame to the modernization. In general, the realistic and consistent design clearly indicates that before us is an online game of a new generation.

Before starting the game, users are advised to visit the help section that opens with the PAYTABLE button. Immediately it is worth noting the original structure of the information window: on the left side there are buttons, each of which opens a separate tab where information about a specific moment of the video game is described. The latest tab informs you how to control the game using a keyboard.

Recently, more and more often developers present gamblers with slot machines with a fundamentally new system of charging winnings. Based on the structure of the slot, before the start of the game process, the user has to choose only the face value of the game credit, and then – a total bet. Also for the convenience of players, the buttons of a maximum bet and the automatic rotation mode are on the control panel.

Orange & Red Comets are the Wild pictures and they replace, as usually, any image of the game except for the scatter symbol and the transformer icon. Colorful Vortex is the Scatter symbol and it can both form scatter wins and trigger free spins. Once triggered you will be awarded with 15 spins. At the beginning of this feature, you will have to choose which type of Wild will appear in the feature. You can choose between Bouncing and Spiral Wilds.

The slot also has 3 different randomly triggered modes of playing: the Left to Right mode, the Both Ways mode, and the Left to Right Transformer mode. With the first one, your wins will be paid from left to right. With the second one, winnings will be counted both ways, and with the last one, wins will be paid from left to right and the transformer will be available. Transformer can appear only on the reel 3, and once it appears it will transform all 6 lower paying pictures including itself to one and the same symbol.