You can not play this game for free
For free slots game go
Play free
or
(6 votes)
Full screen: Report a Problem: close 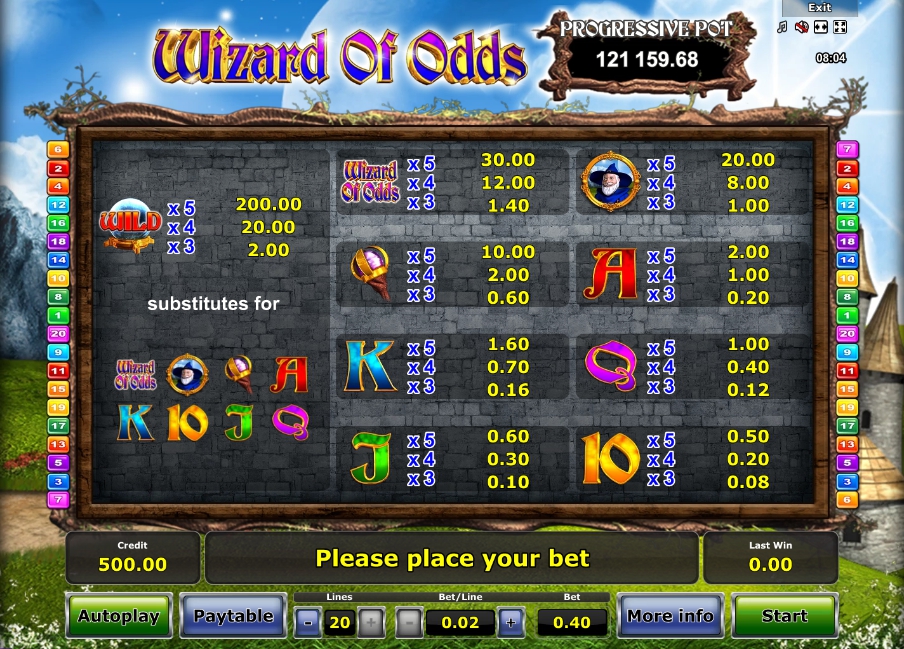 Wizard of Odds slot is another bright out of the memory game from the company Novomatik, which will give you a fun adventure with a good wizard. A pleasant intuitive interface, well-designed graphic elements, and stunning winnings and all that makes Novomatic slot machines remarkable, gathered in this incredible game.

General Description of the Wizard of Odds slot machine

Wizard of Odds is a five-reel gaming machine with twenty lines and fifteen pictures on the main screen produced by Novomatic. You can use any number of active paylines from the offered number. In addition to the progressive jackpot announced above and the basic pictures that follow the general rules, the Wizard of Odds casino game has special images, thematic bonus rounds, free spins and a risk game for doubling the accrued payout.

The reels of the Wizard of Odds video slot present eight ordinary pictures and four special symbols. The basic icons are denominations of cards from tens to ace, the main character of the game, his magic staff and the Wizard of Odds logo. Special features include the following elements: Wild (crystal ball) and three bonus images (a cauldron with something yellow, a wizard’s hat and a spellbook).

Bonus Games of the Wizard of Odds slot machine

Bonus symbols, which can form the combinations on a game screen, provide you three bonus options:

In the Wizard of Odds slot machine, there is a progressive jackpot. It accumulates from deductions, which are automatically made from the users’ rates made by real money. You can win it in the bonus round of Cauldron according to the rules described above. The full jackpot is given to the client playing at the maximum bet. If it decreases, the potential amount decreases proportionally.