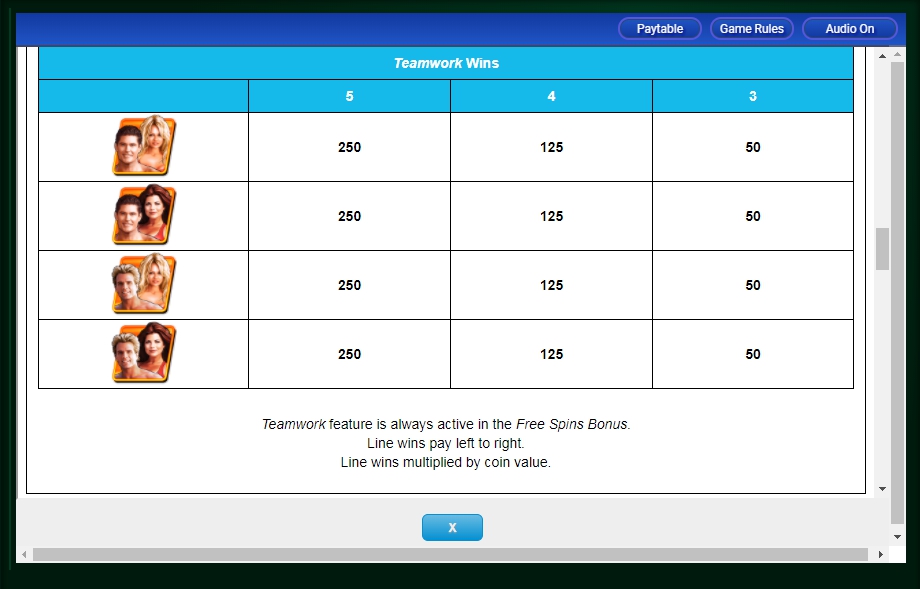 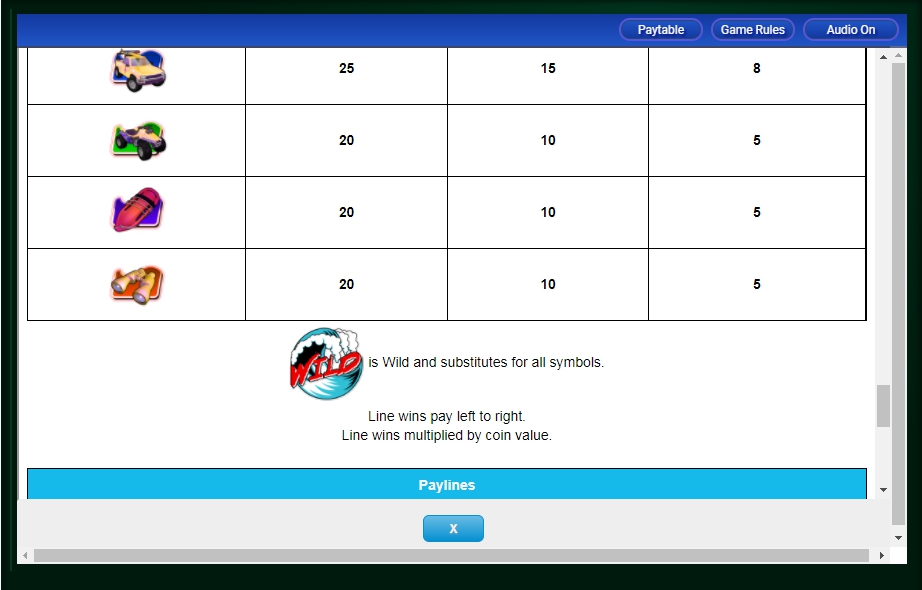 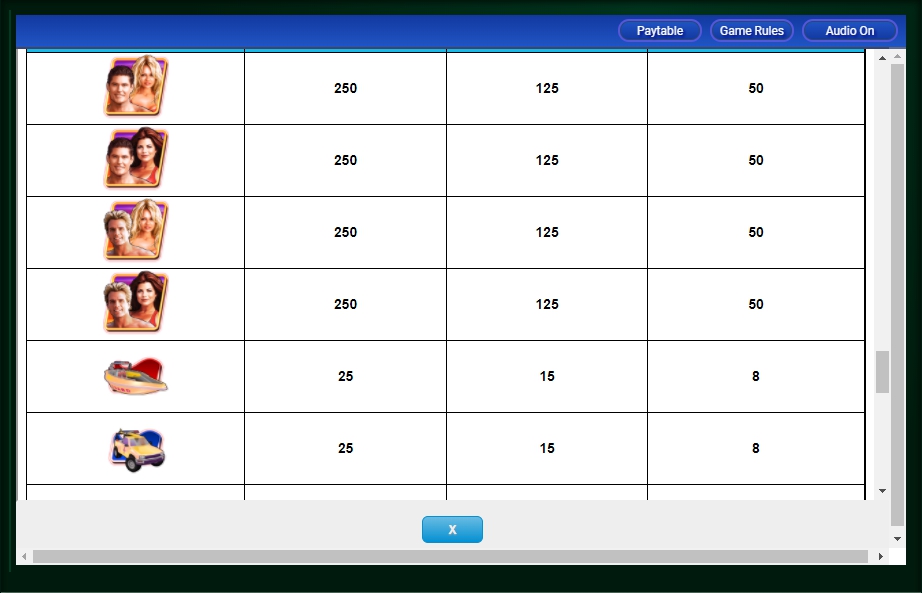 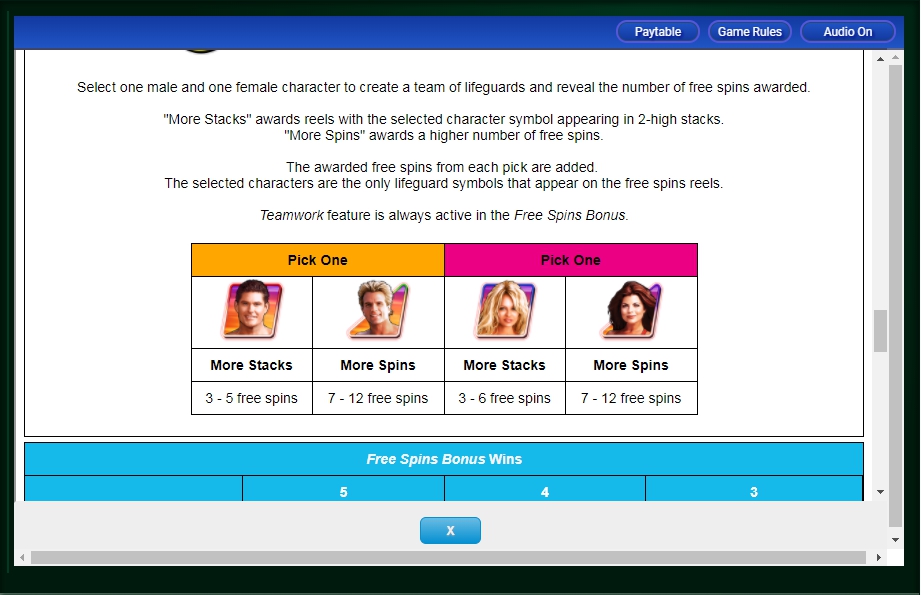 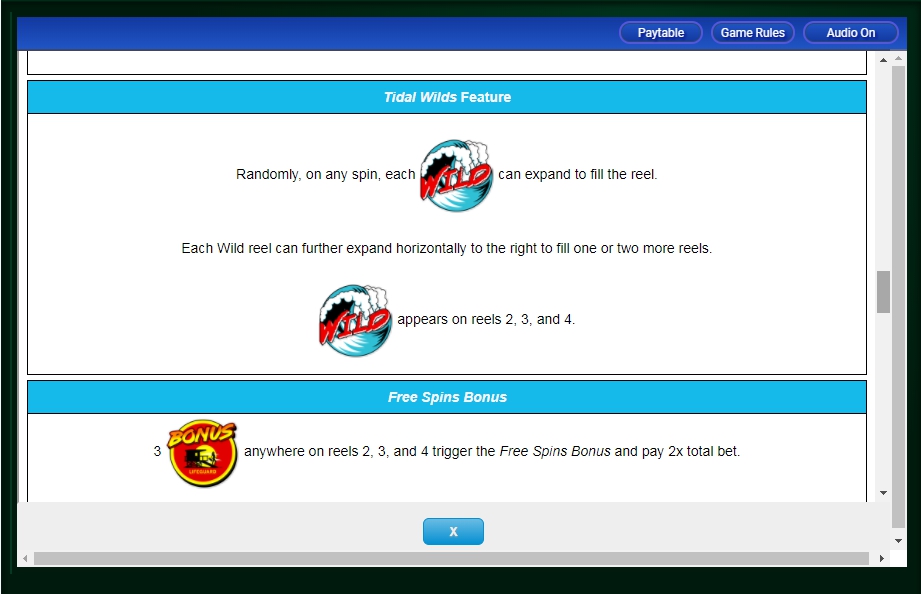 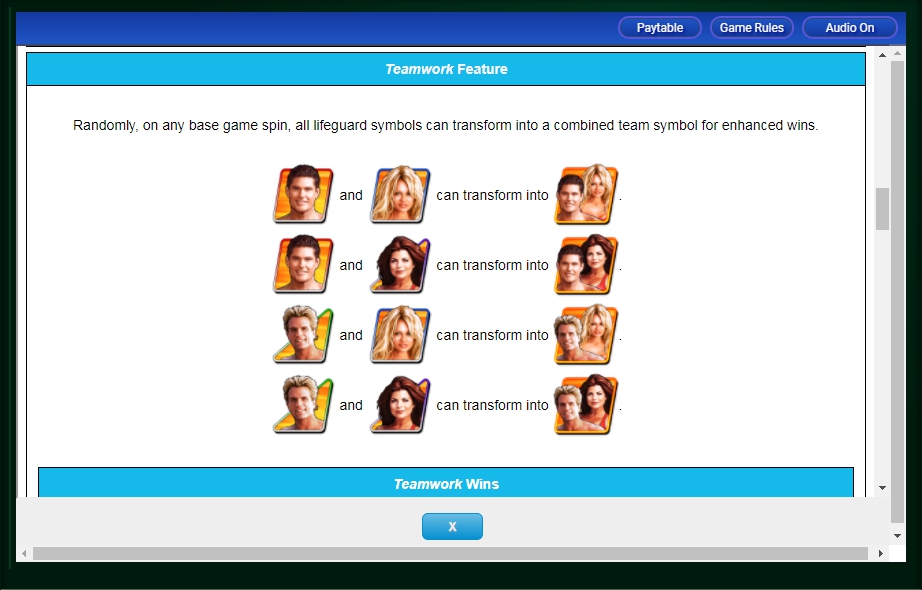 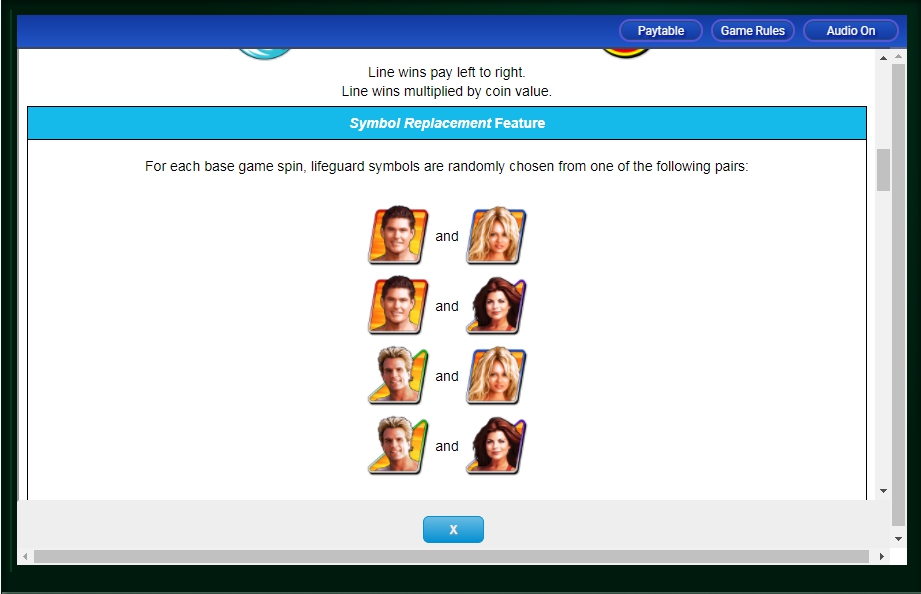 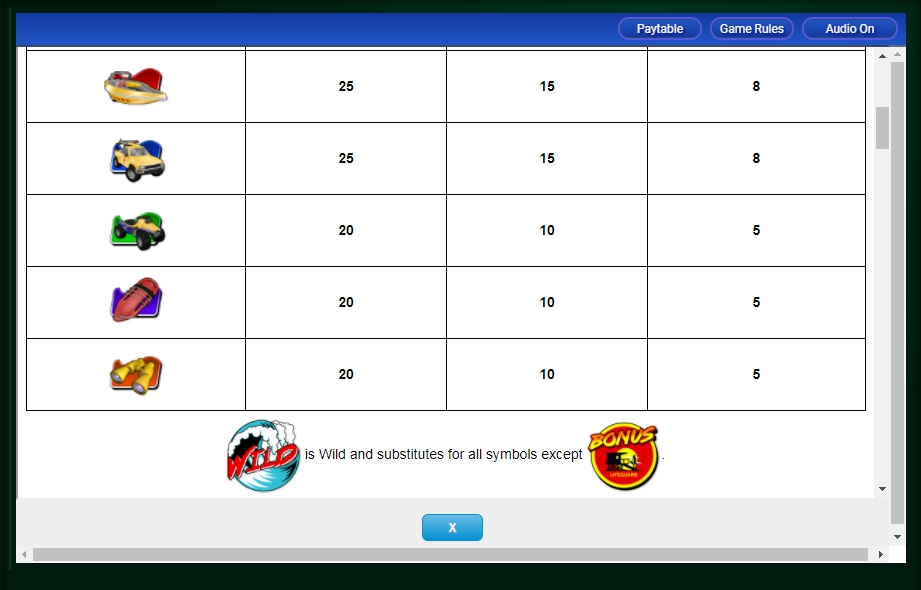 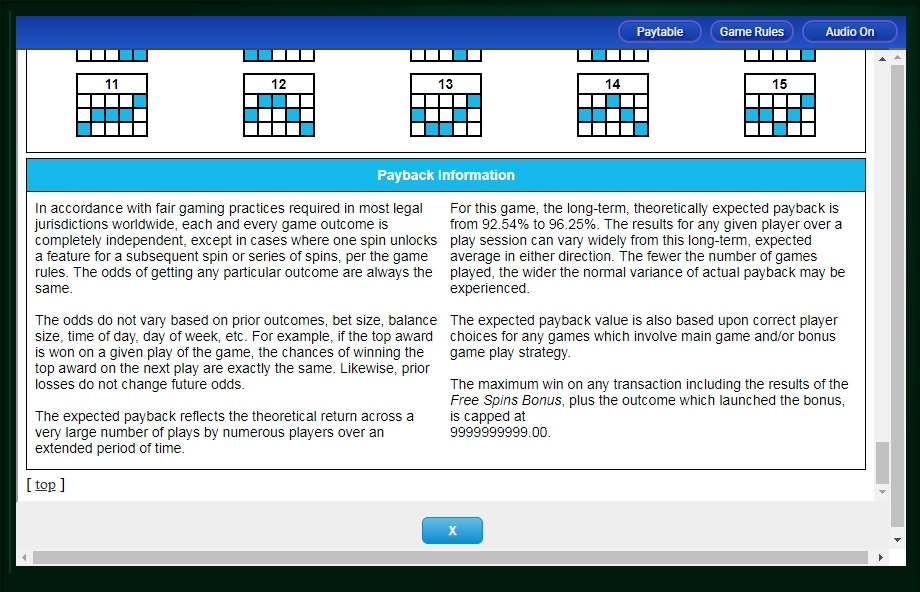 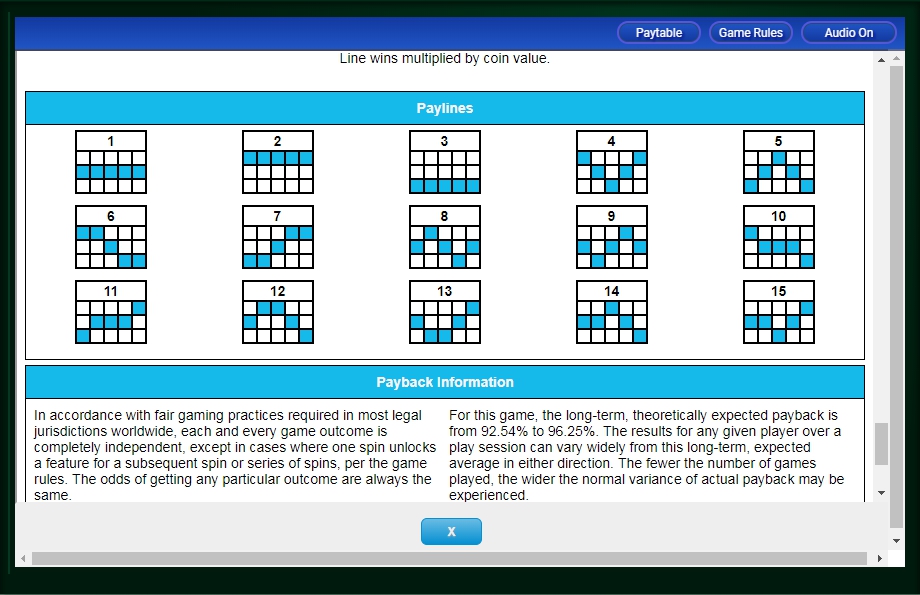 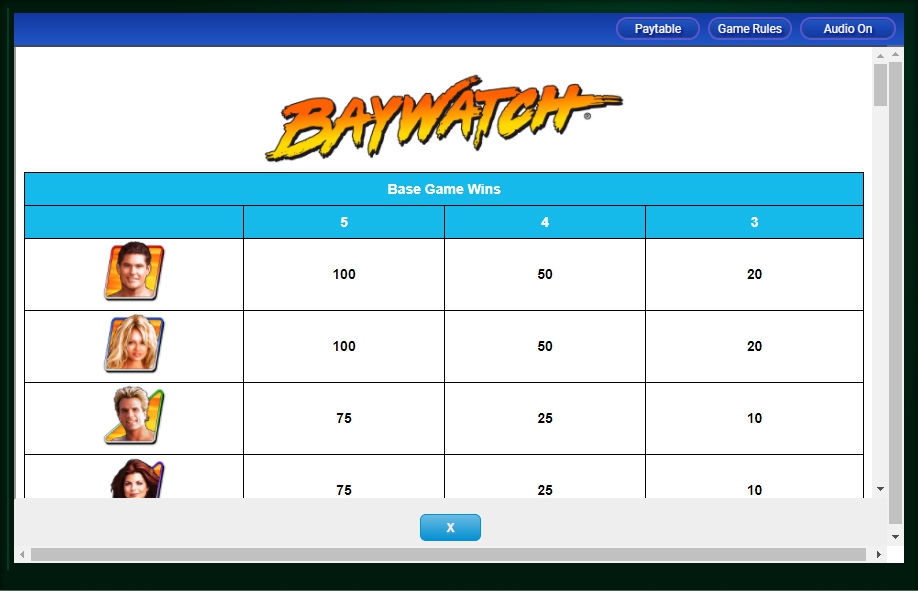 The American TV series “Baywatch” was included in the Guinness Book of Records as the show that has the biggest amount of watching. Can you believe that it was watched by more than one billion and hundred million audience?! In several seasons many actors have acted, but a large part of the audience has remembered stunning Pamela Anderson. Outstanding forms of the spectacular lady have eclipsed her acting in the opinion of admirers and have brought her unprecedented popularity. The IGT (WagerWorks) company has decided to reanimate slightly forgotten series and has presented the new online slot – Baywatch. The slot machine offers such popular symbols as Scatter and Wild, free spins, multipliers, a bonus, and a jackpot up to 3000 coins by the line in the main game. Symbols on the reels include images of the main characters of series ” Baywatch ” and also a boat, a scooter, boats of rescuers and symbols of cards 9,10, J, Q, K and A.

The wild symbol represents Pamela Anderson with a swimming board in a hand. It can extend on all chances and add to you advantageous combinations. The wild symbol however appears only on reels 2, 3 and 4 and replaces all symbols, except Scatter and Bonus. Scatter is a symbol of a tower “Baywatch”. When 3 or more such symbols appear on reels, 12 bonus free spins are activated. When on the third reel there are extending rescuers, the bonus function of Rescuers will be unblocked.

Carolina Halden will cause 6 additional free spins with a multiplier of x3.
Matt Brody will give the players the additional frozen wild symbol and 6 additional free spins and Neelie Capshaw increases bonus multiplier and gives you 6 additional free spins.
The Rescue Bonus is started when the Rescue Feature symbol appears somewhere on the fifth reel. Players have an opportunity to choose function of rescue at the choice: bonus of CJ Parker Respin or bonus of Lifeguard Mini.
CJ Parker Respin wild symbols aren’t joined on reels, and randomly settle down on the field and remain locked before the termination of a round. Free games and a bonus of Lifeguard Mini can’t be activated during the draw of CJ Parker Respin.
In Lifeguard Mini bonus the player receives the sketch-card with 15 symbols of the rescuers covered with sand. The symbols open one by one, and you need to receive identical symbols to win a monetary prize. Each rescuer possesses own monetary prize. The bonus of CJ Parker is always equal 10, increased by the general starting bet irrespective of whether advantageous it is a symbol or not; the prizes of Carolina Halden, Matt Brody and Neelie Capshaw randomly are chosen between the following parameters: 3, 4, 5, 6, 7 or 8 to increase by the general rate.