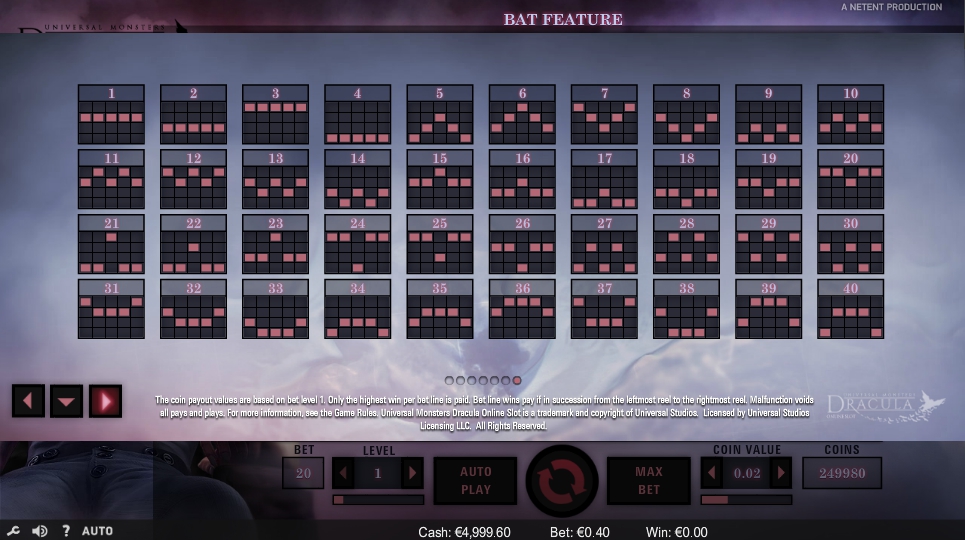 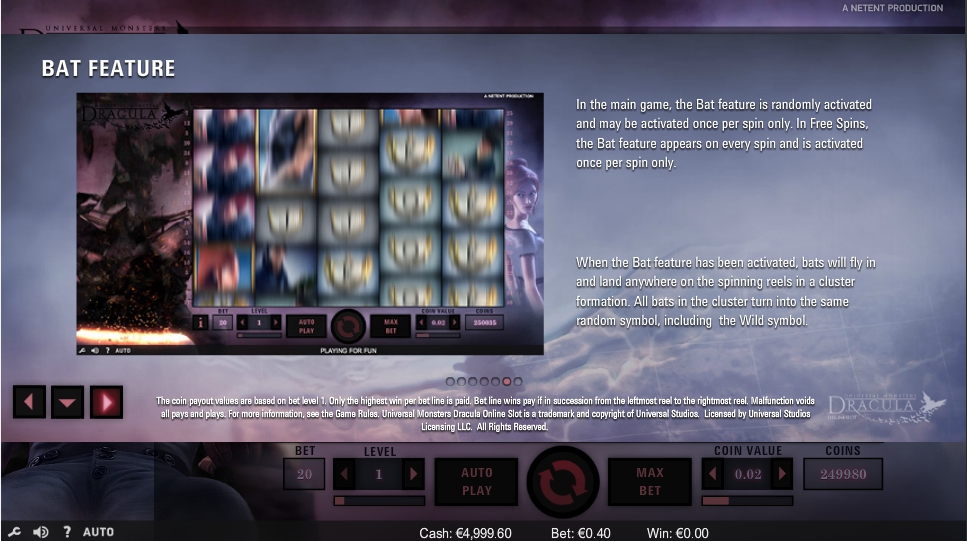 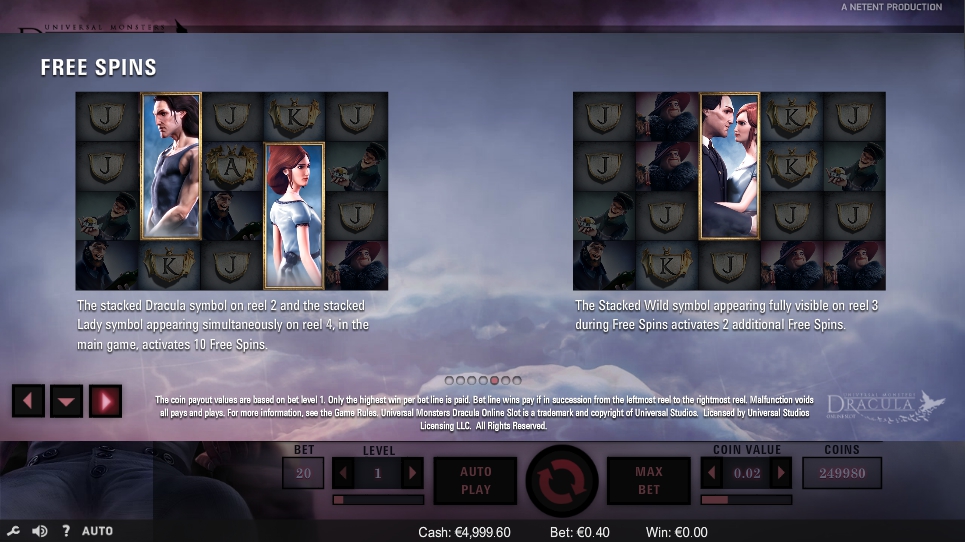 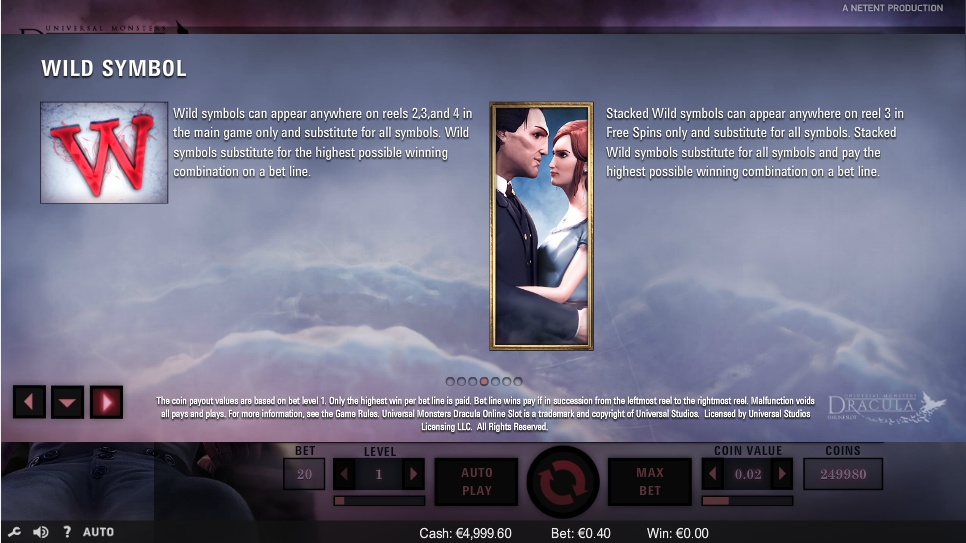 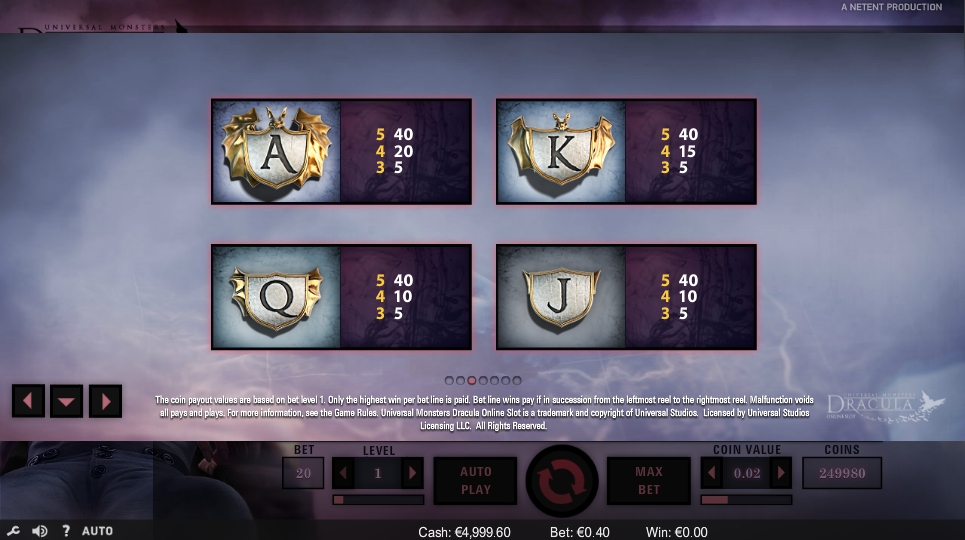 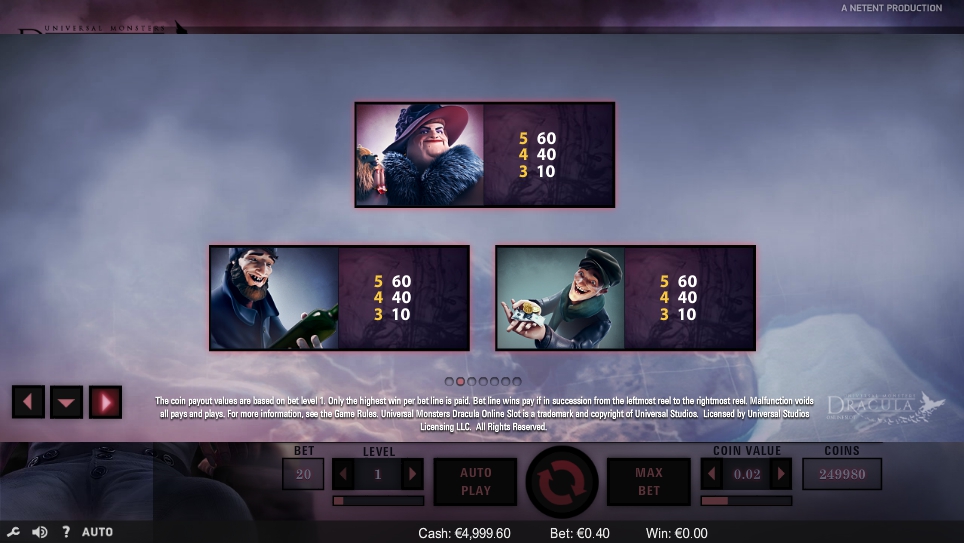 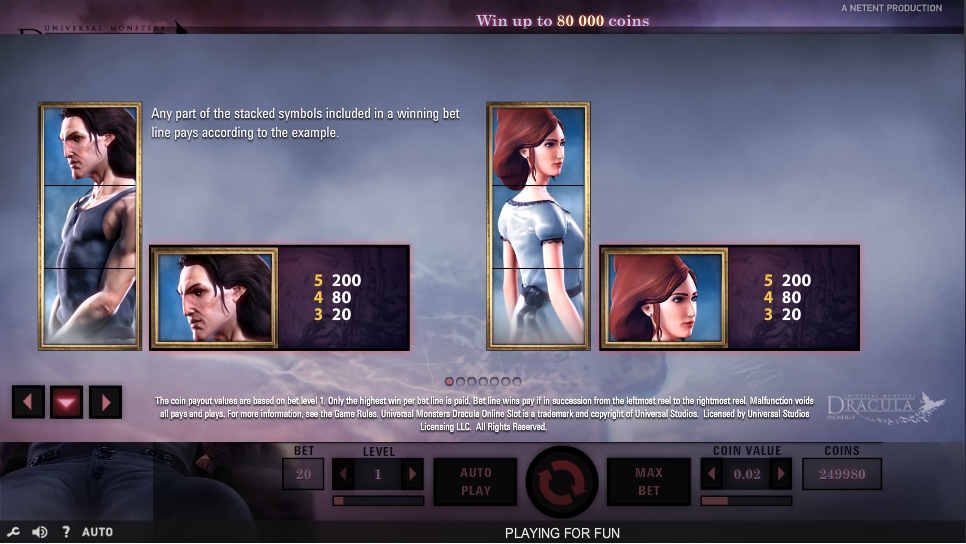 The Dracula Slot machine was created by the Net Entertainment company (NetEnt) together with Universal Studios. 5 reels with twenty always active lines – that are the technical characteristics of this free gambling machine. This slot is perfectly animated, and this will allow the player to plunge into the world of mystery and blood lust completely. However, you shouldn’t be afraid, this game conceals in itself many various pleasant moments!

At start of the slot, after a small prompt, the player face to face meets the gloomy main character who is impatiently tapping with fingers while waiting for next spin. The range of bets varies from one cent to dollar, i.e. on a round you can put from 20 cents to $200. The prize is paid for continuous chains of identical symbols, which appear on active lines from the reel first at the left. Coefficients of payments for the dropped-out combinations from 5 to 200 can change. In one spin there can be several chains and then prizes for each of them are summarized. There is no game of risk and money is at once paid into your account.

On the reels you will see traditional playing cards from Jack to ace, and also the count, the girl, other characters of the novel. As a special symbol serves the red letter W – it is the Wild. It can be seen on three middle reels. It replaces other symbols in the right place, helping to form advantageous chains.
The Stacked Wild is an image of Dracula from his darling. When on the second reel there is a Stacked Wild, and on the fourth – the girl, a series from ten free spins begins. In each free rotation the bonus game Bat is activated.
The prize-winning feature Stack Wild goes as one of the awards of a bonus round of the Dracula slot machine. Under the terms of this function, thanks to the main character and the girl who give you additional spins, for the period of free rotations may appear additional substitutes.

The main feature of the Dracula gambling machine is in appearance of the vampire, sitting on the right, who, if desired, can turn into pack of bats and cover with itself certain places of the slot for transformating them in the great symbol! The quantity of the struck cells depends on the operating mode of betss:
Basic — from 4 to 12;
Free spins — from 4 to 20.
To start bonus free games in the Dracula gaming machine, the player needs to catch all (on three parts down) images of the main hero and his lady on the reels. After that you will see an animation on which Dracula and lady embrace. This symbol can appear only on the third reel.