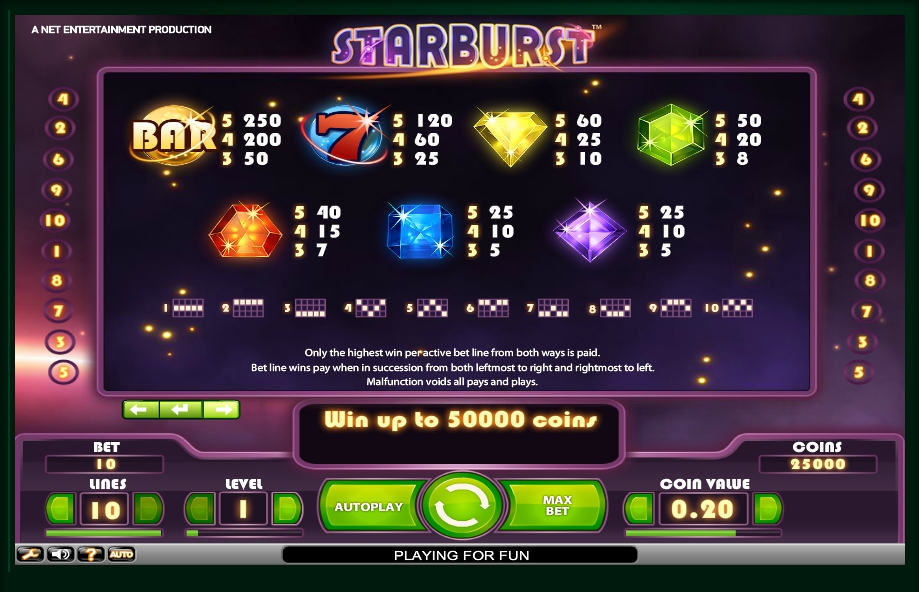 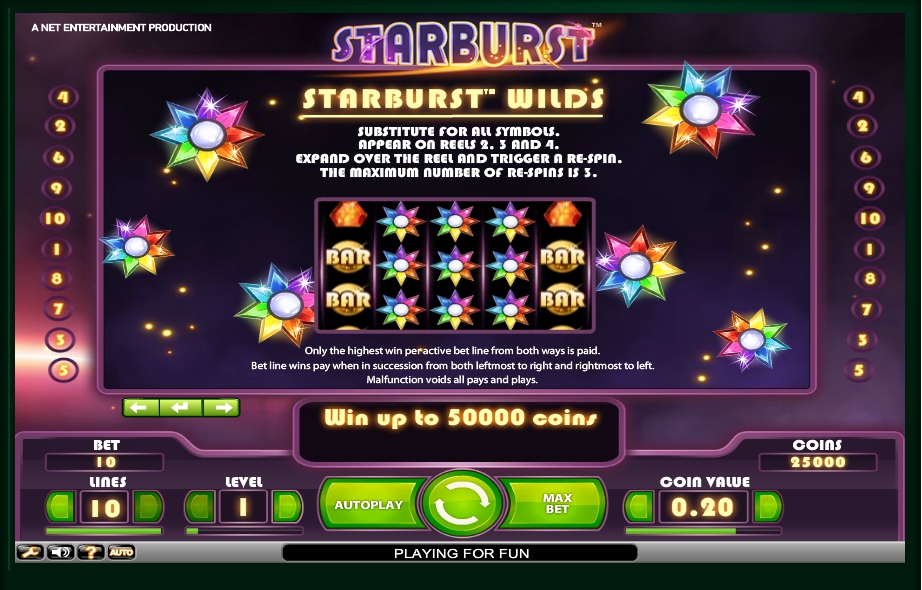 The Starburst is not only a popular slot machine, created by the NetEnt, but also offers an exciting theme, which mixes vibrant color of arcade atmosphere (3D graphics) with shiny and contemporary symbols which are offered in a standard gameplay. For highly paid energizing slots, the Starburst offers many fun features that make the gameplay an experience not to forget. The game uses colorful gems as focal point as well as game symbols. The animations and effects on the starburst make the playing experience more engaging and interactive.

The Starburst FREEPLAY automatically plays the game for the selected number of rounds (alternatively, click the AUTO button). Winning combinations and payouts are made according to the PAYTABLE. Alternatively, click any symbol on the reels during the main game to view a mini paytable for that symbol. The Bet level is the number of coins bet per bet line. A bet line win in coins is equal to the value shown on the PAYTABLE multiplied by the bet level. A bet line win in currency is equal to the win in coins multiplied by the coin value.

Starburst Wild symbols substitute for all symbols. Only the highest winning combination on an active bet line from either right leftmost and/or rightmost to left is paid. The bet line wins pay when in succession from both leftmost to right and rightmost to left. Simultaneous wins on different bet lines are added. The COINS displays the number of coins the player has available to wager.

There are no multipliers or scatter symbols here, which can be disappointing for some. However, the features here are definitely worth re-emphasising just so you know exactly what to look forward to when playing Starburst. The closest thing to a bonus feature the game has is the expanding Starburst wild feature, which will give you up to 3 re-spins, if the wilds appear for 3 times consecutively. Perhaps the most interesting feature here, though, is that that you can win both ways, meaning that you win when three or more symbols appear both from left to right or from right to left on the first three reels. This definitely increases the excitement of playing, as well as your odds of winning!

With the Starburst slot machine you can win up to 50,000 coins, but let’s be a bit more specific with payout symbols. On the lower end of the spectrum, you have the orange, purple, and blue gemstones. Payouts get a bit more enticing when you hit green and yellow jewels, on the other hand. However, what you’ll really be on the lookout for is the 7 icon. Striking five of these gets you 120 coins! The golden bar icon is more exciting still, as getting five in a row will win you 250 coins! As for wagering limits, the range is wide enough to accommodate everyone from the overly-cautious to the highest of rollers. You can put in as little as €0.10, or as much as €100.