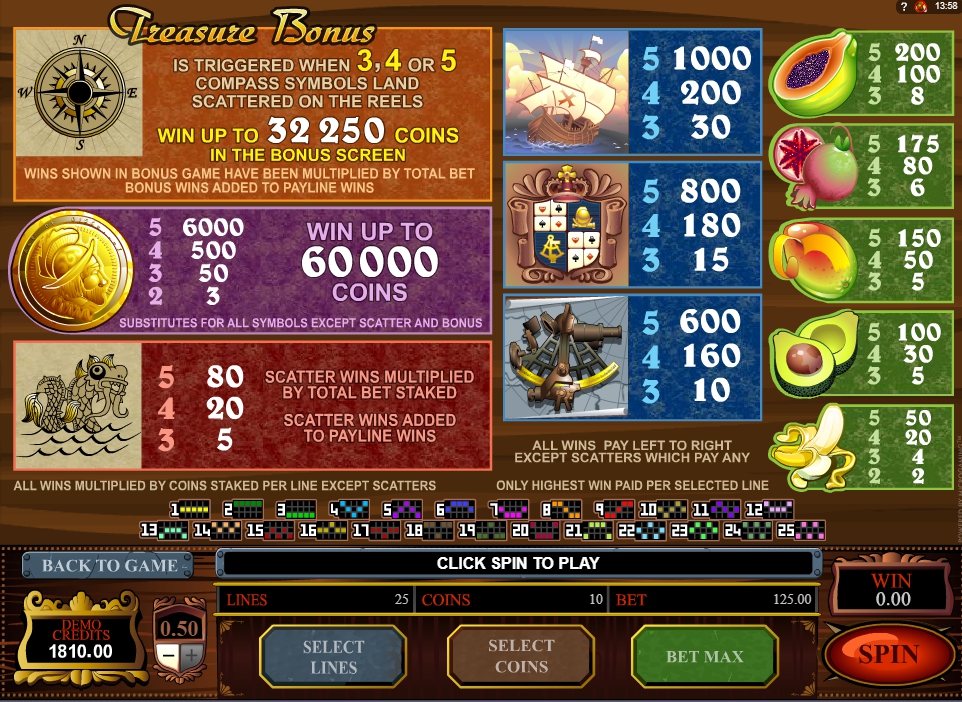 To date, the world knows a lot of video slots with the theme of marine adventures, and as a rule, they all look alike. But the world-famous slot manufacturer – the Microgaming company – decided to create something truly memorable and released the Age of Discovery gambling slot. You will become a pioneer of the sea horizons, which will have to be navigated without a map, fight with terrible sea monsters, and, of course, discover the yet unveiled wealth of the sea depths.

The playing field of the Age of Discovery slot is made in the form of an old worn naval card, on which game symbols are placed. There are 5 reels here, but you will not see their boundaries, which also adds some highlights. The game symbols themselves are painted with multicolored ink: a sextant, a compass and other navigational aids, as well as images of sea monsters and exotic fruits that sailors brought from new countries. The slot looks unique and very presentable, like all Microgaming’s creations. The range of bets varies from 1 to 10 cents. You can bet on one, several or all 25 active lines, the value of which is indicated in the special chart in the corner of the screen. In addition, the slot is equipped with the following buttons:

The jackpot is equal to 1000 bets, so it makes sense to immediately play big. But if you are new, you can play Age of Dicovery in the free mode, which presented by all modern online casinos.
In addition, the extremely high rate of return of this gambling machine should be noted – 96.6%! This means that almost all of your spins will be winning!

Bonuses and features of Age of Discovery Slot

A set of special characters affecting the gameplay in the Age of Discovery videoslot is standard, but the characters themselves have their own characteristics. The wild symbol is depicted as a golden coin. It appears exclusively on 2, 3 and 4 reels and, accordingly, does not create its own combinations. Its task is to replace the ordinary pictures in order to form prize combinations.

As the result, there is a high probability that new successful combinations will appear on the field. The scatter is depicted as a giant dragon. The combination of 3, 4 or 5 such elements on the playing field gives the player the right to have 10, 20 or 50 free spins, respectively. They can also be extended – but no more than 50 free spins at a time.

Ant and Decs Saturday Nigh...