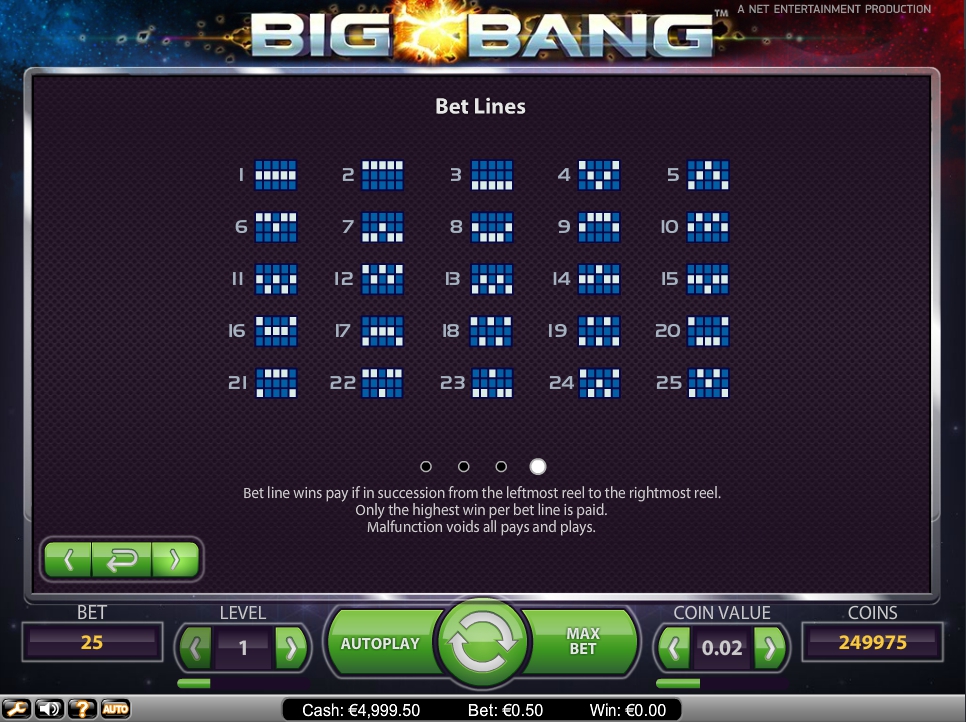 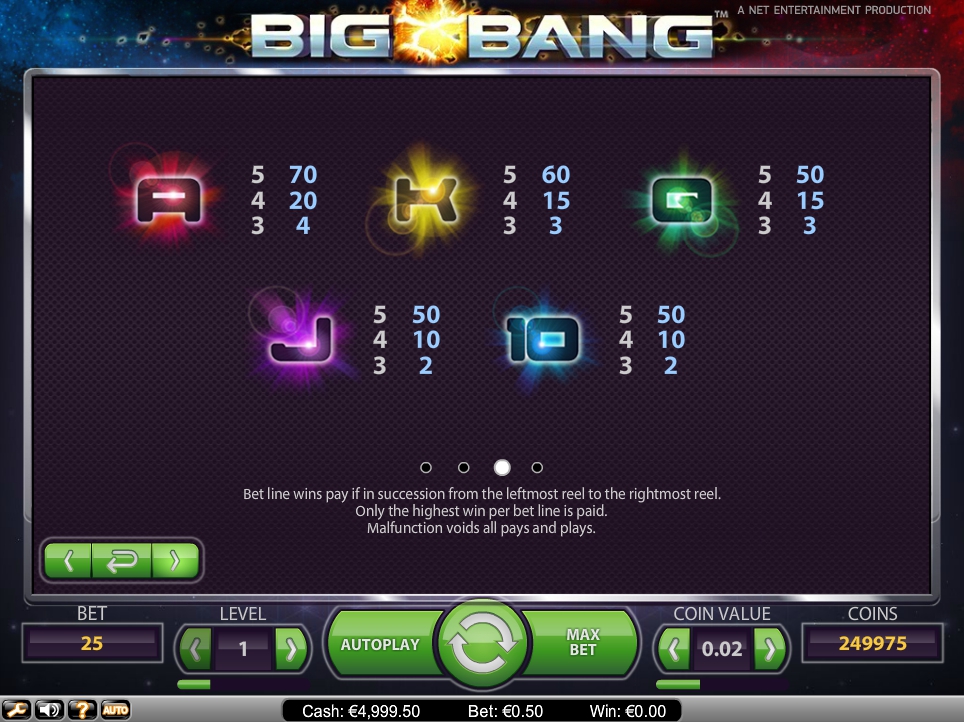 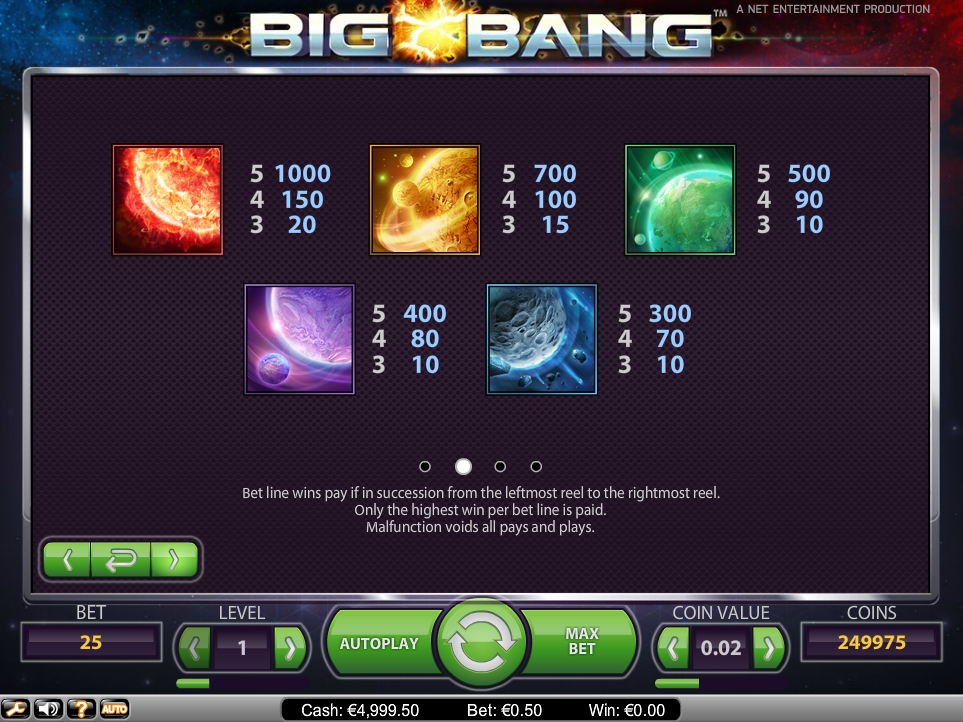 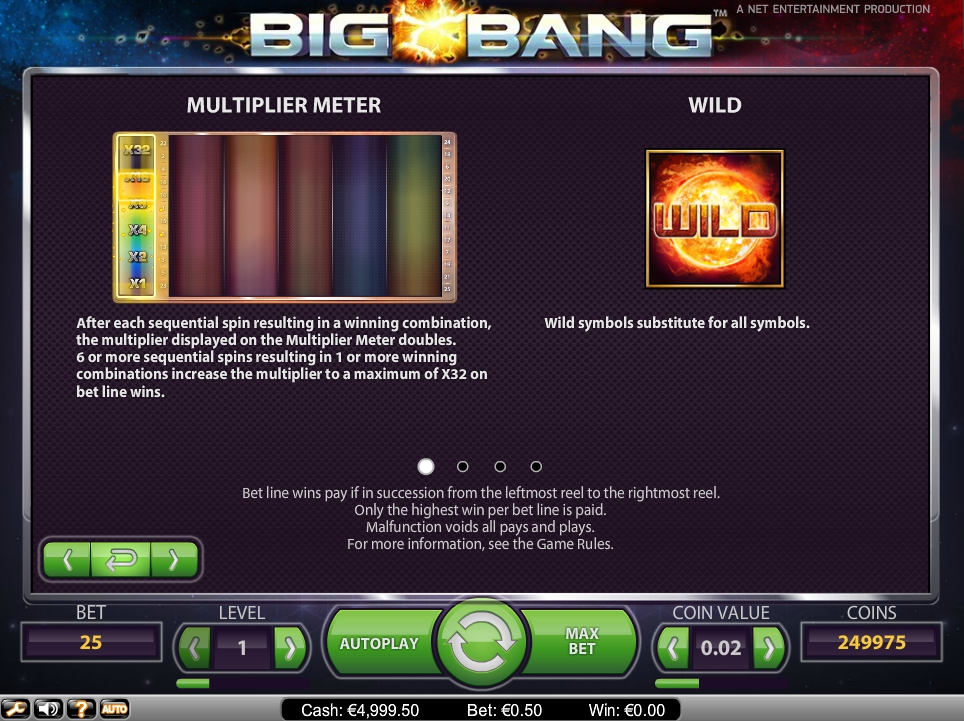 The Big Bang slot is a bright and powerful novelty of the market of gambling software which transfers us back to 14 billion years. Only in this case you have from the Universe an opportunity of receiving a progressive scoring in the Multiplier Meter mode.

In general, the interface of the slot Big Bang is executed in reserved dark tones. The control bar is below, in the center are reels, and sideways – a progressive multiplier is placed. In the management plan the slot is very simple. For a start you need to select bet level. In total they are four. But this unit as many think, is not the final amount that is staked. After that you select a coin nominal. There are six options: 1 cent, 2 cents, 5 cents, 10 cents, 20 cents and 50 cents.

By multiplying two parameters, we receive a single bet, but also it is not a limit yet. There is still a number of lines. Depending on what their number you decide to activate, the final general bet will be formed.
For example, if the level of a bet is 1, actively 25 lines, and value of a coin of €0,01, then a total bet it is equal to €0,25. It is minimum possible option on Big Bang online slot.

If you want to risk, you can make the maximum rate: level of a rate 4 x 25 lines x value of a coin of €0,50 = €50. You can’t but agree that the difference is radical. And, respectively, future prize as it is charged according to multiplication of the general rate by the credits depends on it. The Big Bang slot machine consists of the five reel units which are fastened among themselves by three rows of cells to certain signs. The task of the player is to collect a set from identical images, but they shall be located on one of the existing lines of payments. And all the lines in the slot are twenty five. Besides, this line shall be in the active mode and the combination “is read” only from left to right.

The space subject in the Big Bang slot completely is reflected also in its symbols. Here you will see different planets, each of which will bring an appropriate quantity of the credits. Their complete description can be found in the table of payments. Here the player will be able to learn how many there are image with special offers and functions. It is possible to find the menu under the button “I” on the left side of the screen. Except for the standard symbols, in the slot there are also specials. It is, in particular, the wild. It can appear on any reel and will replace with itself all other characters for creation of advantageous combinations.

As soon as the advantageous combination is formed, on such line the progressive multiplier appears. It has several levels. On the first the multiplier is equal to the bet, but in case of the subsequent successful spins it will grow. So, at the second level the player can expect already double coefficient. On the third the multiplier becomes quadruple, then eightfold, sixteenfold and, finally, at the last level, multiplication reaches coefficient by thirty two times!

It is worth remembering that during serial spins with the progressing multiplier functions of a Wild do not work. Besides, the multiplier grows only in case of in a row successful rotations. Note: if the player decides to raise a rate after the multiplier was activated, then the measuring instrument falls on initial level again.