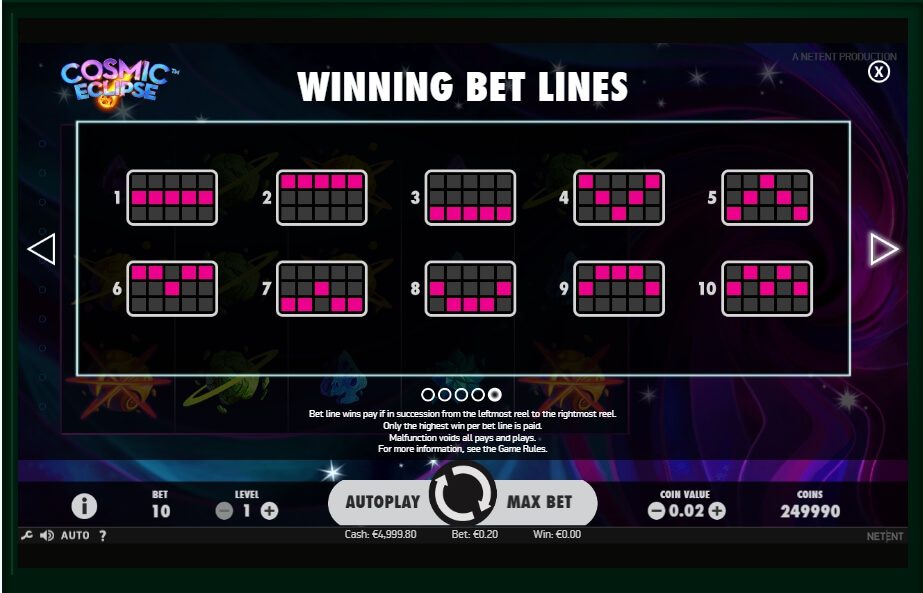 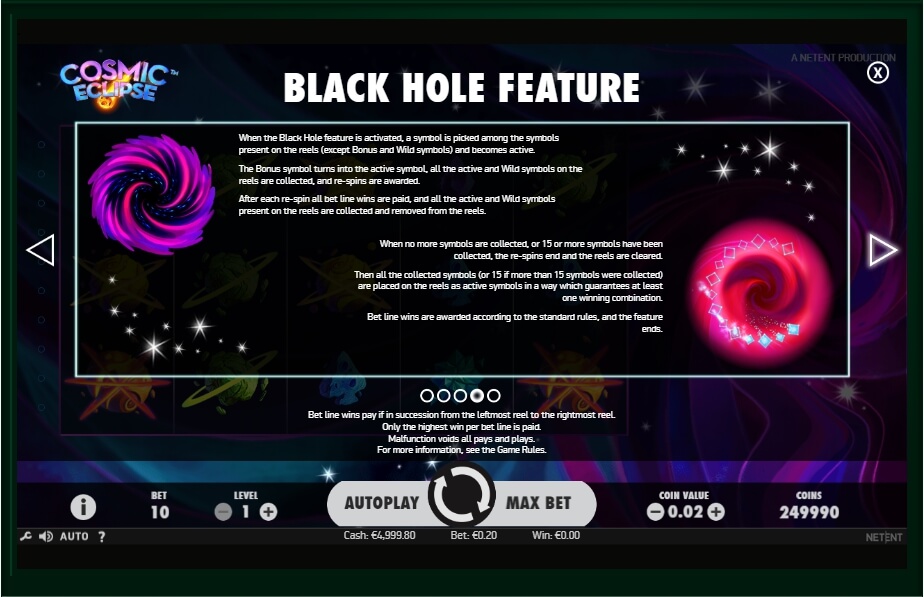 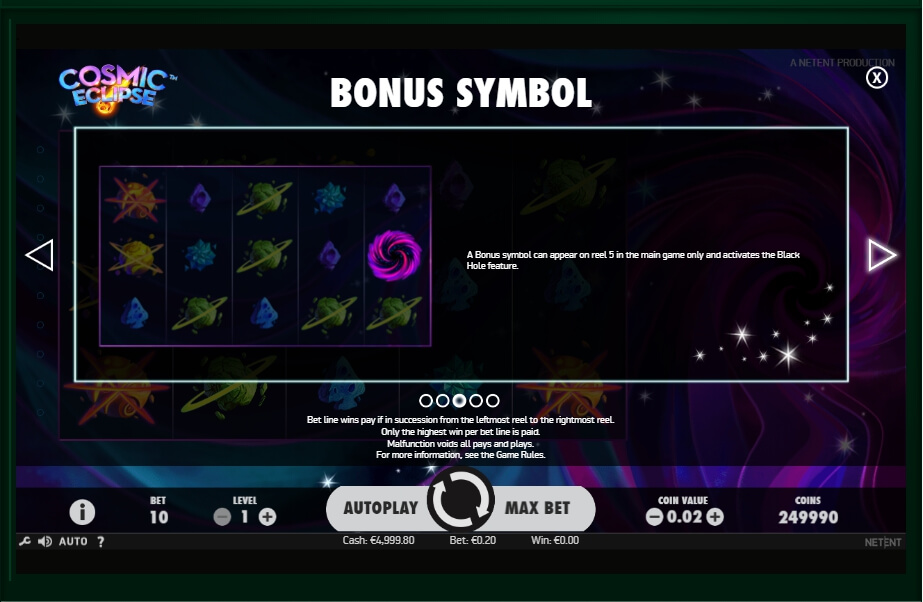 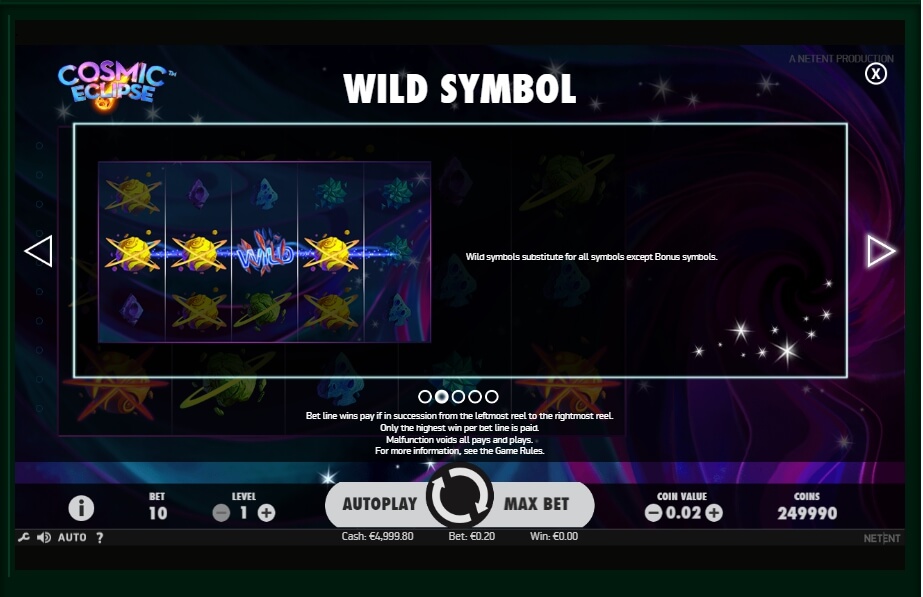 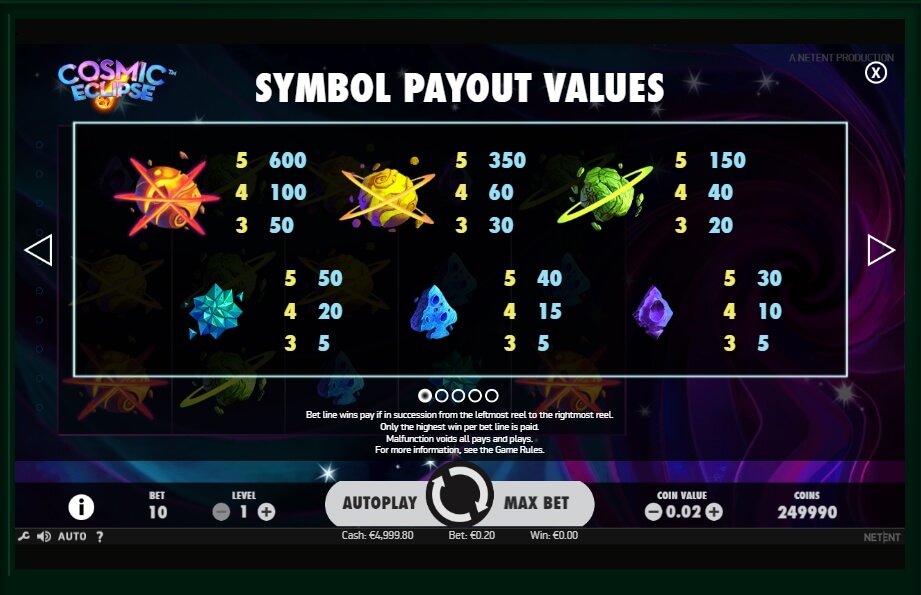 Relatively recently, the mankind has conquered the outer space. Flying around their native planet, landing on the moon, exploring the Earth’s orbit, people have gained new knowledge about the boundless space. Star travel and extraterrestrial guests have always interested people and attracted their attention. All these stories are embodied in the stunning “Cosmic Eclipse” video slot. The NetEnt Corporation once again has demonstrated its high level of professionalism. Your spaceship is ready to fly, avoid asteroids!

The developers have made their choice in favor of a fairly common space theme. But this time it was discovered in the original way because it is not directly connected either with space shuttles or with astronauts. It will be about precious crystals that as meteorites circulate around the delightful planets. The interface and musical accompaniment fully reveal the stellar themes and create the suitable atmosphere. Participants in this game can feel like real pioneers of new galaxies and worlds. Exploring the crystals, you can get knowledge about how the cosmic bodies are formed, what energy controls the planets and how to achieve triumph in this gaming machine.
Millions of stars are depicted in the background, as well as an image of a black hole. The playing field includes 5 reels and 10 paylines. The developers have implemented the interface of this video slot in the black and purple colors. The main screen of this gaming machine has a wide format, so the location looks more voluminous. Also it is worth noting that the video slot has vivid animations that make the gameplay more realistic. To control your spacecraft, the user needs to learn simple rules. To do it, click on the “i” button to open the paytable and additional information. Then, the player needs to bet on 10 lines that are active by default. A large button with round arrows activates the usual spinning. The key labeled “Autostart” activates an automatic round during which the user can enjoy the space scenery and the atmosphere of the game. Sound effects are adjusted at the discretion of the player.

To enable the player to master the space, the developers have added an additional symbol. The wild symbol is needed to replace simple pictures in paid chains. Using this option, the participant can win up to 60 thousand. By the way, real money is played out during each spinning. To conquer the space, the user does not have to go through the registration process. The video slot is available in the demo mode, so players do not need to risk real money. In addition, this option will allow you to explore the features of travel during which you will spend virtual loans.