Lord of the Ocean Slot Game 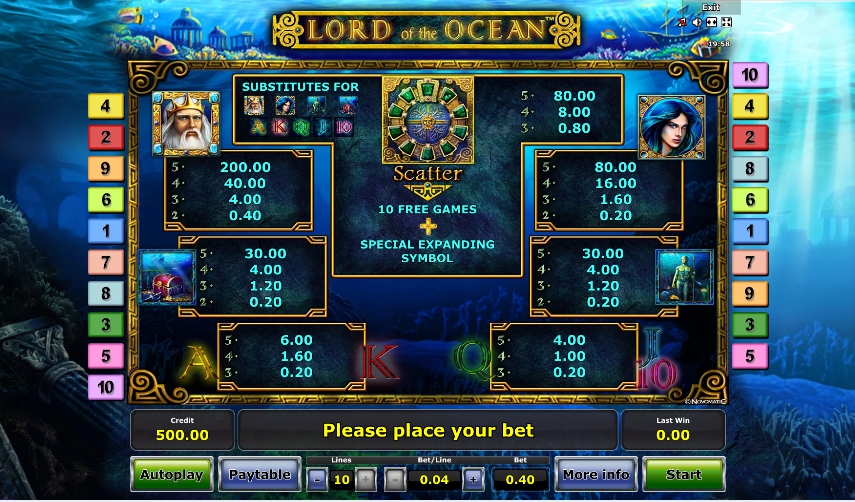 Lord of the Ocean Review

There are many stories about the Greek Titans and Gods which everyone can find on the web resources, but ”Novomatic”s slot machine – a sensation for Las Vegas and rest virtual world of gambling – contains in itself not only ocean-theme but very pleased game moments and nice surprises as well! If gamble admires wishes to play it offline, she/he should make a downloading on to her/his gadget but if do not willing this – can find Lord Of The Ocean Slot on the sites which are providing special (virtual casino) services. Both will happen online with none registration. If you are a beginner, then just use a provided, for the free game, the mode for the practice your skills.

In the deep-deep water of the ocean, there are 5 reels which are decorated with an amazing golden ornament on the border that is framed them around. On the gamble-grid (five x three) are appearing Lord Of The Ocean Slot’s pictures: a flooded red trunk with gold staples, near which lies a rapier; a golden statue of armed with a long golden spear with a trident Poseidon (From Greek – ”that who is shaking ground” – is a Sea God (one of the main 3 Olympians), the Rhea’s and Kronos’ son and Hestia’s, Demeter’s, Hera’s, Aid’s, and Zeus’ brother. After the fabulous battle against the Titans and heavy victory, Poseidon has got the ”water” element of the divided world’s parts. He pushed gradually aside the ancient Gods of the Sea such as Proteus, Ocean, Nereus, and others. Amphitrite (Poseidon’s wife), Triton (Amphitrite’s and Poseidon’s son) and personally Poseidon have gone to a luxurious palace, surrounded by hippocamps, nereids and other dwellers of Sea), and a portrait of the beautiful, blue-haired young woman (most likely this is personally Amphitrite or her granddaughter) with charming deep, as an ocean, blue eyes and wonderful pale face. The common icons (cards’ values) which are seemed to be drawn under the water (a yellow ”A”; a green ”Q”; a ruby ”K”; a lilac-violet ”10” and a blue ”J”) present in Lord Of The Ocean Slot as well. Clicking on the ”Menu” alerts the panel of betting. Every admirer of the gamble games can place her/his wished size of wager and lines number (Regulators ”- +” allows this.) The range for the ”coin-size” is from ”2” to 1 thousand ”coins” (”virtual” or ”real” depends only on the gambler’s done choice at the beginning of the slot’s game). This pelagic video-slot has the lines in a quantity of 40. There is a ”max-bet”-button with the relevant functionality. ”Start” is performing a reel spinner’s role. Option ”Autoplay” make your gambling life easier.

The pelagic Lord Of The Ocean Slot’s goodies (bonus rounds)

After every win, a gambler has a choice: to press the gamble-button and to use a chance of doubling it with guessing (5 tries will be got) the card suit’s color (black or red) or to push collect-button and not nervous about her/his won money. The wonderful ”Golden circle with green square emeralds” is exactly a scatter-symbol. Hit 3+ of ”Golden circle with green square emeralds” anywhere and you will be brought into the ”free-spins”-round with awarded ”10 reel spinnings”. (An important notice: before this feature will be started, Lord Of The Ocean Slot itself gonna randomly pick an icon which will expand when it will appear on the gamble reels.) The portrait of white long-haired and long-bearded Poseidon with a golden crown is a wild-picture that can substitute absolutely all (exception is own by scatter) one. Lucky people, who will ”catch” the 5 Poseidon’s portraits on the active line, will win 10,000 coins!!!

Lord of the Ocean Slot Symbols