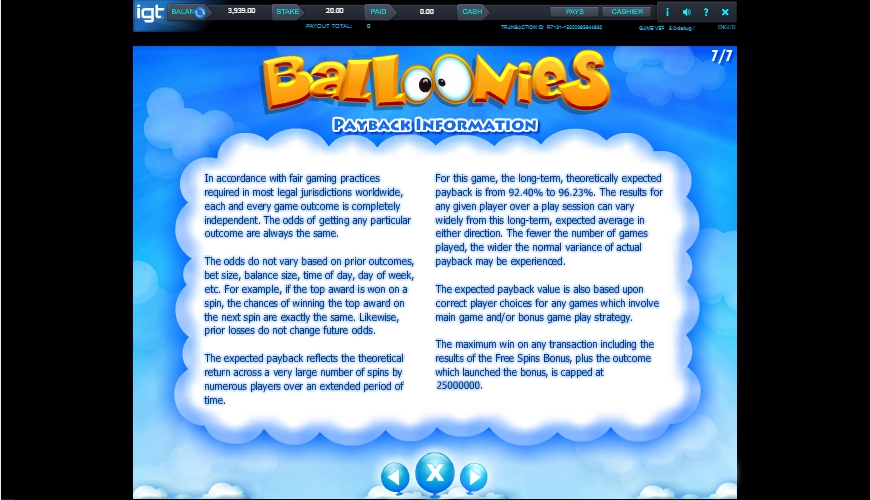 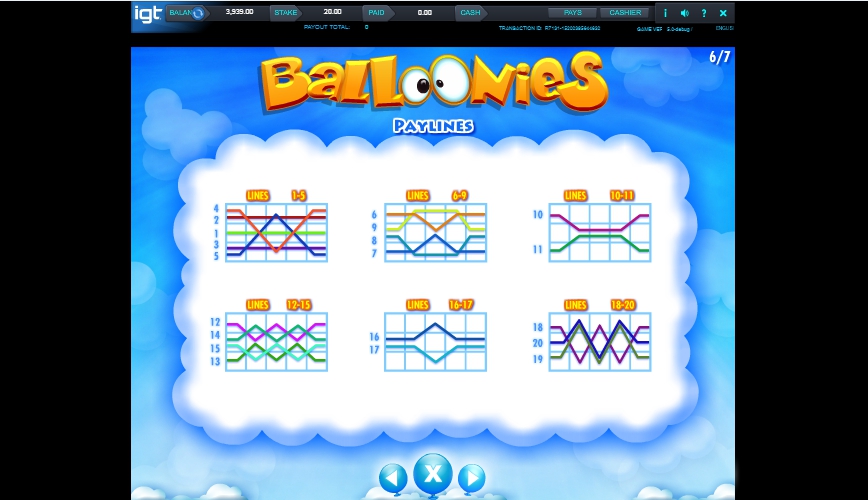 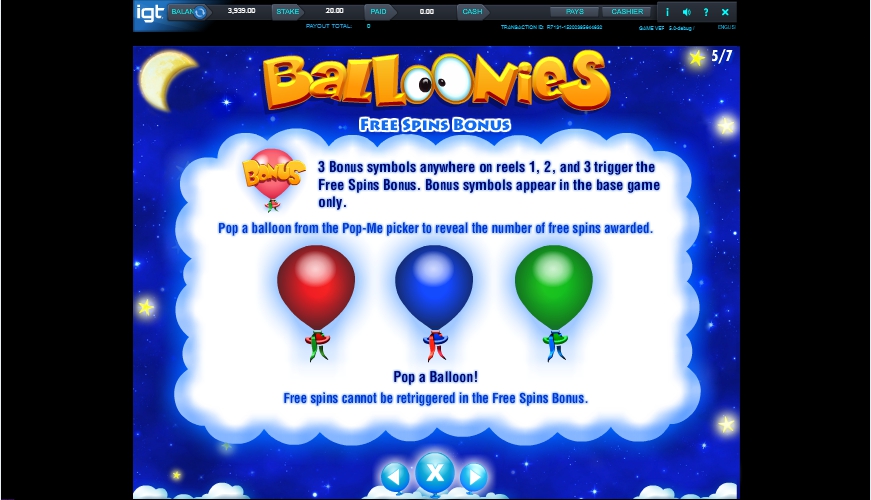 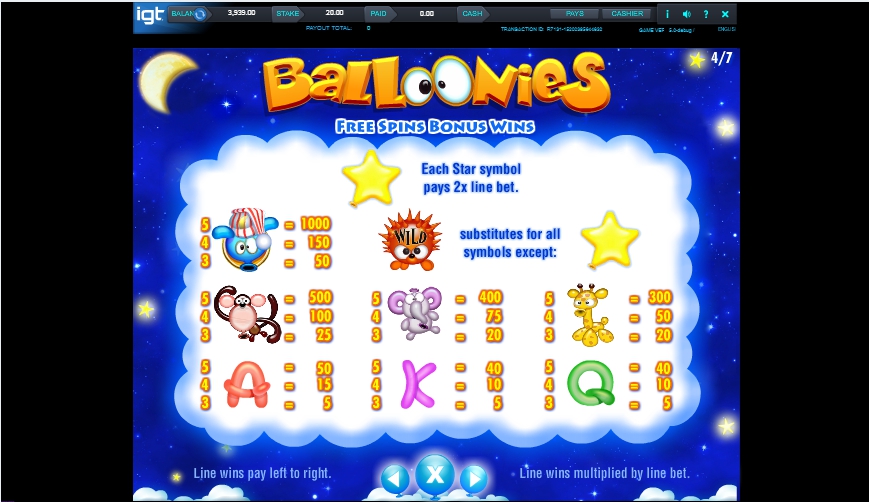 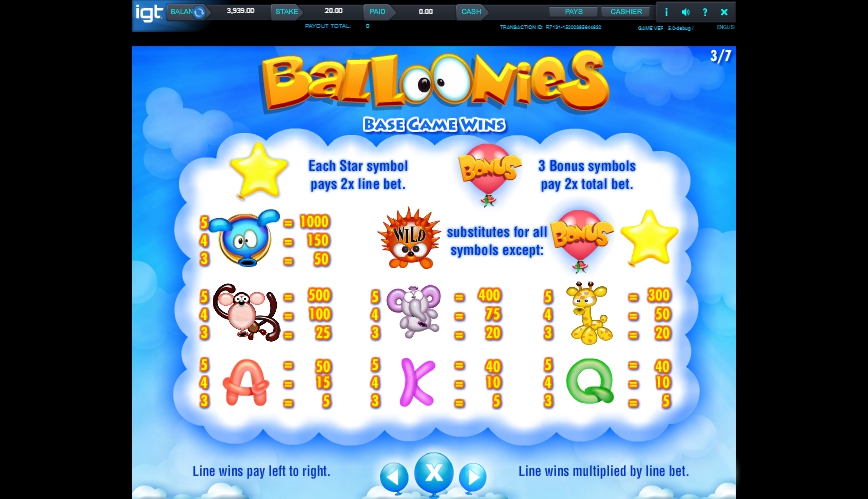 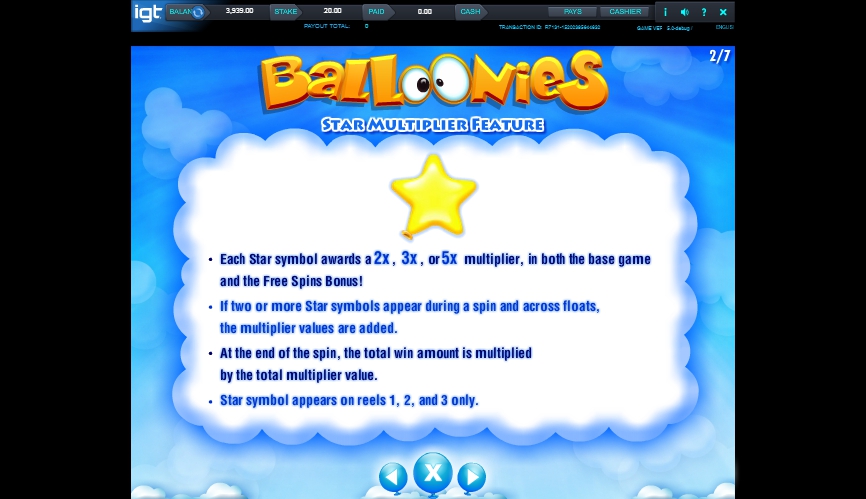 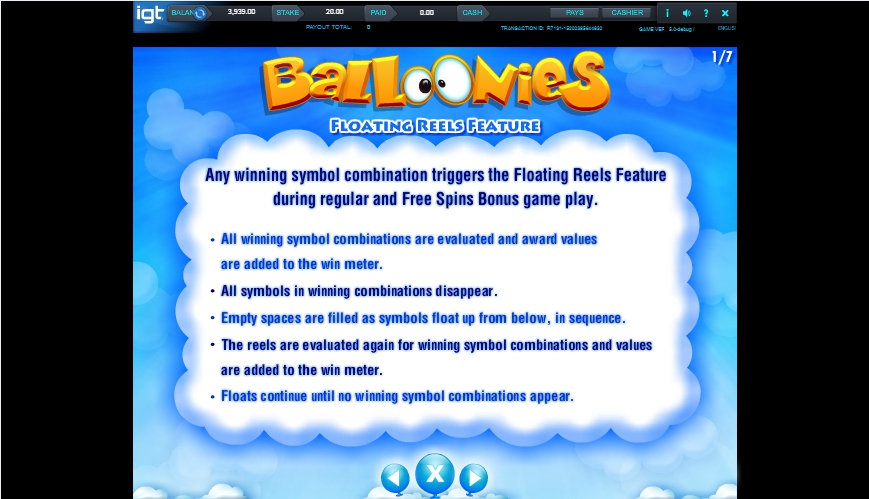 Most children are crazy about balloons. And figures which handymen make of balls, sausages in general, enchant kids drastically. And most of adults won’t refuse to have with a similar entertainment. If you are fond of balloons, we recommend you the amusing Balloonies slot machine which is offered by the developers from the world famous IGT company. It is a great model with interesting design and several nice opportunities.

Balloonies is a five reels online video slot with a twenty lines. Pictures on the screen settle down in three different ranks. Rates on all twenty lines are always the same. On each it is possible to bet from one up to hundred credits. It turns out that on bet not less than twenty coins and no more than two thousand coins are accepted. In a slot there are basic symbols, pictures with special opportunities, a bonus round, free spins and other options.

To receive payment for usual images, you need to collect a continuous chain of several identical pictures on the line. It has to begin with the first column at the left. At the same time only the longest sequence on each of twenty lines is taken into consideration. The size of a prize is determined by two criteria: a value of the line and the multiplier of the received combination which can be from x5 to x1000. This amount is multiplied by each other. If chains are more than one, payments are summarized. After charge of the credits for a picture combination, that made this sequence, blow up, and on their place new balls fly up. This function is called Floating Reels. This process can go on until there are new chains. Then money is withdrawn into the account. As it is approved in rules, the level of theoretical return in Balloonies game is 92,4% – 96,23%.

All pictures on the slot reels represent the figures from inflatable balls. These are various animals, strange beings and face values of cards from the lady to an ace. Also there are Wild symbols (a red hedgehog), Scatter (a yellow star) and Bonus (multi-colored balloons). Wild is presented only on the second, third and fourth reels. That means it can’t make chains by itself, but is capable to replace other basic pictures in combinations.
Scatter is on the first, second and third reels. Irrespective of an arrangement on the field, each of such symbols gives payment in the amount of two to five bets to the line. Bonus is figured only on the first three reels too. The bonus round starts when its symbol appears somewhere in three columns.

The bonus round begins with the fact that on the additional screen three full-spheres appear. It is necessary to burst one of them to learn quantity of your free spins. It can give from four up to fourteen. Then free rotations begin in which for the client of the casino winning is more consequent. To begin a new spin, use the round button on panel center. It allows stopping reels in advance and to skip animation. By the way, there are no reels here, and the new characters in the form of balls appear from the lower part of the field. The table of payments is rather informative and allows understanding all basic rules. There are no special settings. It allows you only to turn off the sound, to make a full screen window and to select quality of graphics. There is no need to download the Balloonies slot. A game is launched on the website.