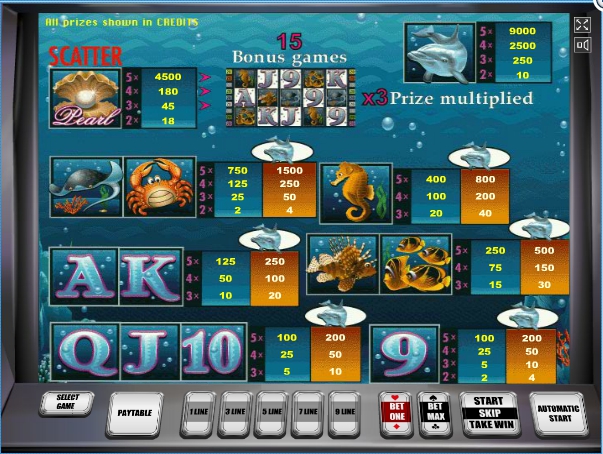 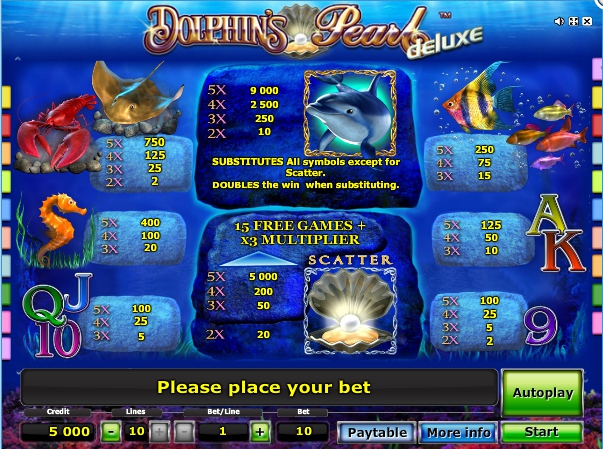 About the extraordinary intelligence and ingenuity of dolphins people have known for a long time. You can say that dolphins are the smartest animals on the planet. Among the thousands of incredible stories there is a legend that a unique pearl in the shell is hidden at the bottom of the ocean. Outwardly, it does not in the least differ from its counterparts. But, unlike them, this pearl is able to turn a person who finds it into a wealthy person. To try to find the famous pearl, the player is enough to visit the famous emulator from the developer Novomatic – “Dolphin`s Pearl Deluxe”. The video slot will transfer the player to the bottom of the ocean, where, along with the dolphins and the rest of the water inhabitants, he will go looking for a magical pearl. If he manages to do this, then he will receive a great reward as a reward.

The main monitor of the gaming machine does not show multi-colored pictures, but has one blue tone simulating the ocean depths. So, under the influence of animation, the signs on the drums will come to life, and please the player with all sorts of tricks. Musical support for the video slot is characterized by a light energetic melody, which can change the timbre in the process of forming a winning combination. On the online slot there are 10 lines for payments. The management interface is simple in design. To learn its functional abilities the player can quickly enough.
The Bet / Line key is responsible for the bet level, and the Lines button for the number of pay lines. The video slot can offer the player’s automatic reel launching function. Autoplay will activate the mode. All the necessary information about the slot is in the Paytable. In it you can not only learn about the coefficients of payments for a particular sign, but also see an example of the successful construction of lines. Those who have already played online in the classic slot will not be difficult to understand the interface of the updated version.

The prize combination on this gaming machine must contain not less than 3 identical signs. Free spins on the online slot will be available to the player after appearing on the 3 scatter marks field. In the process of bonus spins, the bet and the number of lines that were selected by the player in the main round remain unchanged.
Constantly after the successful completion of the draw, the video slot will prompt the player to become part of the risky stage (the Gamble button), and if it is successful, increase the prize pool by 2 times. Obtain such a reward can be after a small task – determine the color of a mysterious card. It should be noted that in this round the player can not only earn good money, but also lose the won credits.

Book of Ra Temple of Gold