SORRY, DEMO GAMES ARE NOT AVAILABLE IN YOUR COUNTRY!
(9 votes)
Full screen: Report a Problem: close 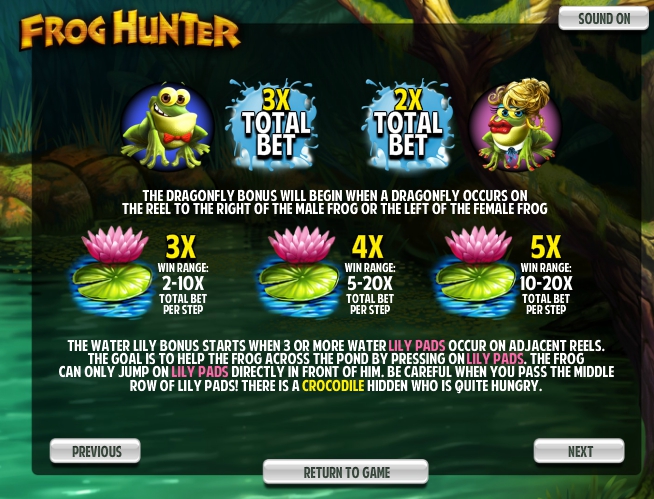 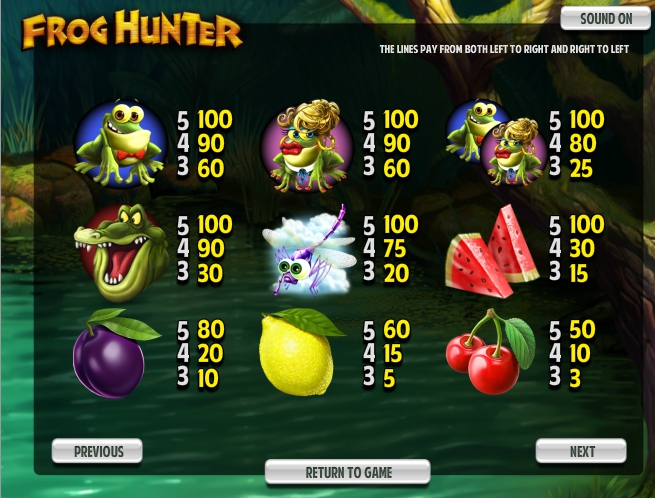 Modern manufacturers of slot machines often produce various slots about frogs. This cheerful and funny character is long settled on the casino gambling machines. The popular company “Betsoft” was not sidelined and also released an online game called “Frog Hunter”. In this game, the player will meet 2 green creatures that live in the swamp, and an angry crocodile who wants to attack and eat them.

The magical world of a happy frog was embodied in all elements of the slot, from graphic design to the interface details. The musical accompaniment also emphasizes the atmosphere of magic and miracles and does not detract from the main process. Bright characters are represented in the form of frogs and crocodiles, which will miraculously make up the combinations. Victory sequences of signs are accompanied by small animations and sound effect, however the game reacts to the actions of the user as quickly as possible, it starts at any settings and any power of the PC. The background image has the plants that surround 5 drums and 5 lines for payments.

Now let’s talk about the rates. This game is good because it is suitable for any “budget”. The rate for one line can be different, from 0.02 to 5, and it all depends on your wishes and risks. What about paid combinations in this funny game, they are formed using 3-5 pictures, which are located side by side. Next, you define the number of active lines and then you are ready to start the game and press the “SPIN” button accordingly. The game has incredible graphics, it can be seen that designers spent a lot of time on this. From the acting characters you`ll get an opportunity to meet a frog (boy), another frog (girl) and a hungry crocodile that hunts them. Also, you will come across fruit (lemons, cherry and other fruits). We describe the properties of the pictures below.

Well, you bet and you are ready to rotate the drum. After you have done this, symbols appear before you. For example, let’s say you got both frogs. Note that they can form joint combinations. As we have already said, different fruit and other inhabitants of the marshes can appear before you. Supposing, after that you got two symbols- dragonflies, for example, and a water lily appeared in the game. These two images mean bonuses.

If the dragonfly appears next to one of two frogs, a bonus mini-game “Dragonfly” will be activated. Lilies, in the amount of 3 till 5, are able to call another bonus round, which is called “Water Lily”. In this game, the frog does need your help to reach the other shore using the water lily leaves. Payment is made for each successfully executed jump. The total winnings depend on the number of symbols in the combination that launched this bonus mini-game. Your main enemy in the slot game “Frog Hunter” is an evil crocodile who is waiting for the moment to attack the frogs. If the crocodile manages to swallow one of the frogs, then the round will end immediately. But despite this, the money earned will still remain with you! The slot game is ready to give you a jackpot of one hundred coins.