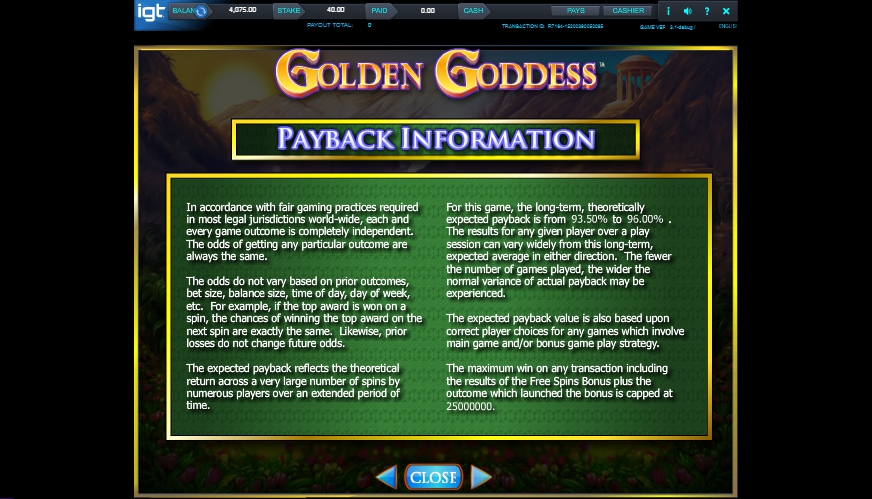 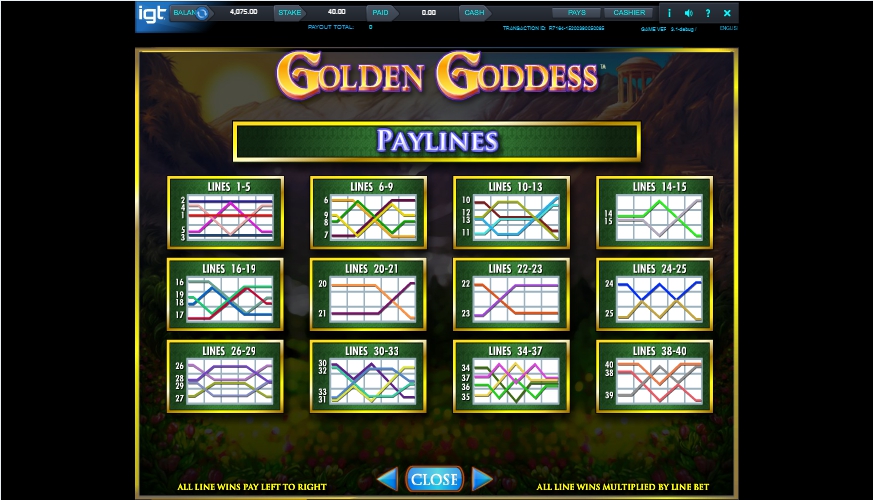 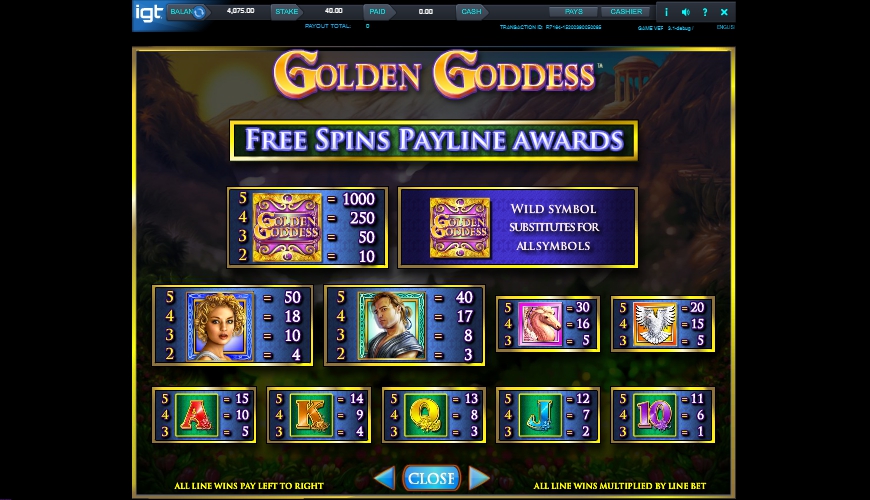 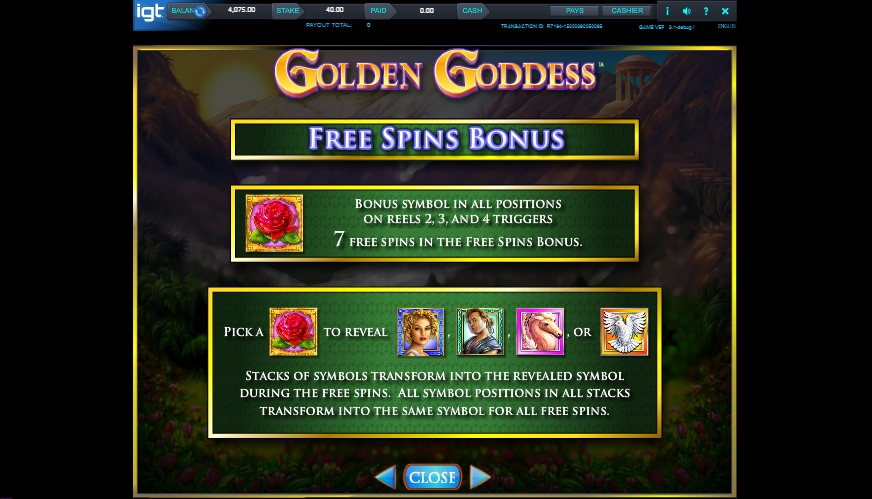 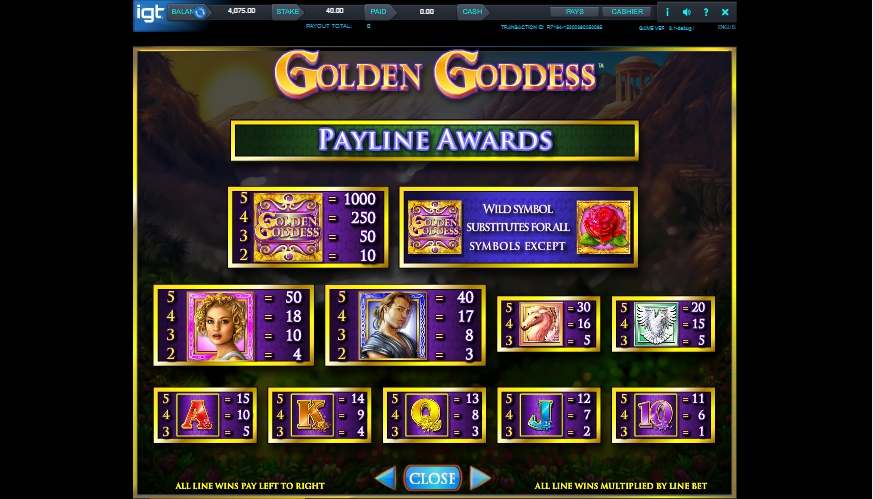 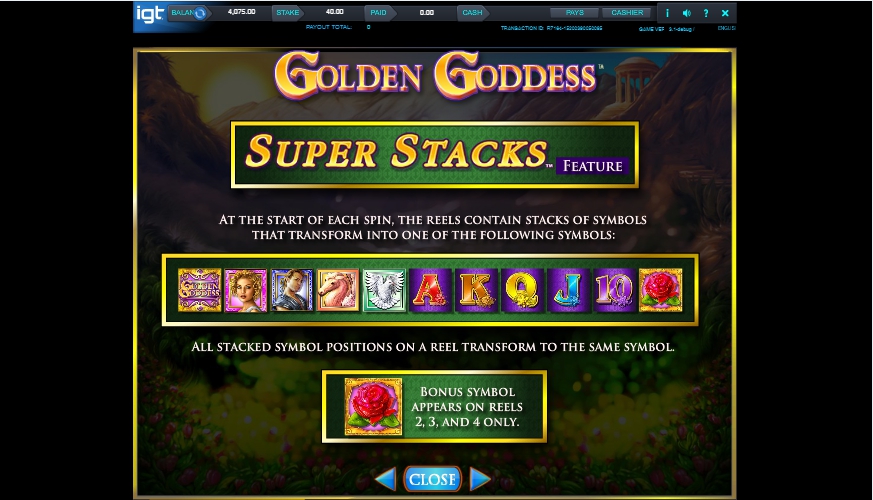 Golden Goddess is a gaming machine from WagerWorks, based on a romantic story from ancient Greece, where the love story of a young man and a girl could touch even the hearts of the gods and goddesses of Olympus. A colorful screen and a very easy to manage slot will be able to give you a divine win. And for beginners there is an opportunity to play Golden Goddess without registration and download, and also familiarize with the functions of the slot machine and the possibility of receiving a jackpot with a virtual deposit.

The game screen of the Golden Goddess casino slot is made up with pastel tones and mild lines. The colors are bright, suggesting at least a pleasant pastime. At the bottom of the screen are conveniently located buttons for controlling the slot machine and a paytable, and on the sides are the most frequent bonuses and the conditions for their activation.

How to play the Golden Goddess slot?

As for the management of the game, it is quite convenient and understandable here. All information about winning lines and payments is displayed in the PAYTABLE section. In addition, this tab hides info about the basic rules of the game. Next, you can use the Plus and Minus buttons to adjust your bet. There is also a pleasing option for high-rollers. It is an ability to play all lines with the maximum amount of coins on them. You can bet up to 10 credits for each line, so you can imagine the profit in case of winning. The Golden Goddess casino game has standard 5 reels and 40 paylines, and you can bet only one coin on each of them. The denominations of coins vary from 1 to 50 cents. The game also has a jackpot that is equal to 50 maximum bets and pretty high recoil coefficient – 95%. If you are a newcomer, we recommend you to play the Golden Goddess slot in a free mode to study its main features more clearly.

The main characters of Golden Goddess casino game are quite various. Here you will find images of the protagonists of the story, as well as symbols that denote the divinity of their union: the unicorn, the white dove, the rose, the golden branch and others. In the game there are also standard card symbols with quite interesting stylization, and the logo of the game, which is also a symbol. To form a winning payline you need to collect at least three symbols of the same kind, beginning from the very first reel. Each symbol has its own multiplier, so you will receive a winning, which is significantly bigger than is said in the paytable.
Also, there is a set of special characters affecting the gameplay of the slot. It i represented by Wild, Scatter, and the Bonus Spins option, which is randomly triggered.
Wild is the game logo. It can appear on any line – and if it does, you will be instantly greeted with 1000 coins – and also can substitute any game symbol except scatter and the bonus trigger.
Scatter is an image of a scarlet rose. It can appear on the second, third and fourth reels, and if you collect three scatters – get 7 free spins and run a bonus game. During this level, the line with the scatter will become hidden, and you will need to stop each reel in turn to select the game symbol. With the Super Stacks feature, the entire active line is filled with game symbols with the highest winning multiplier, and you can significantly increase your capital.