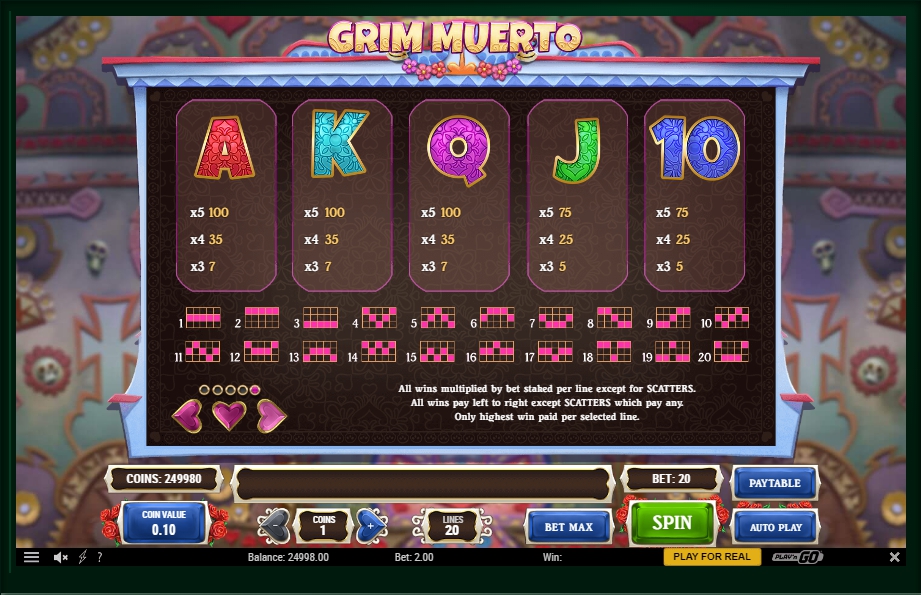 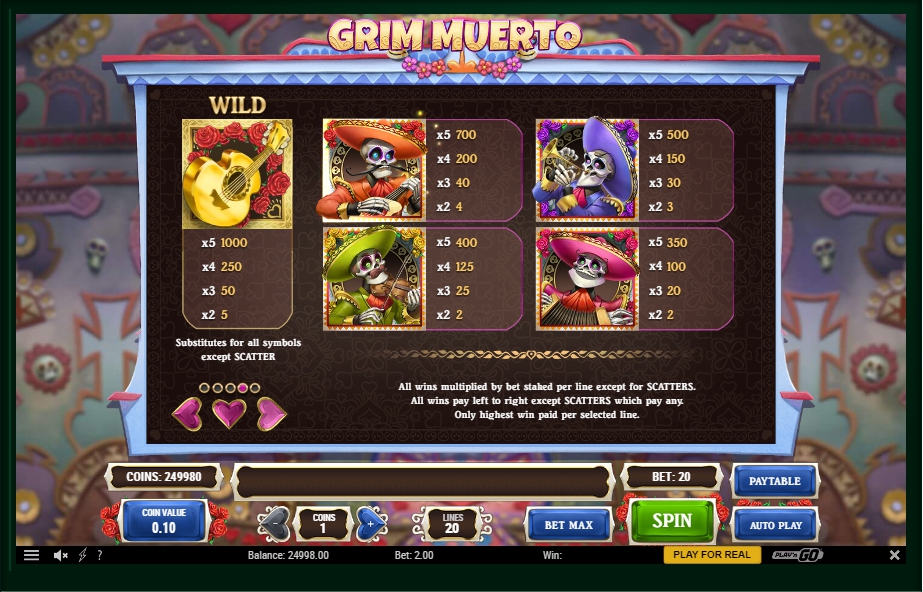 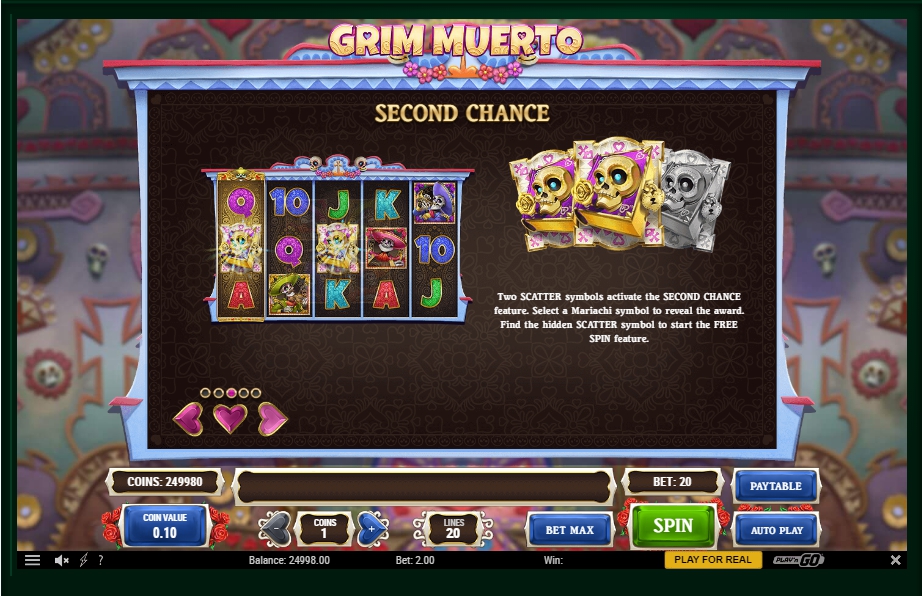 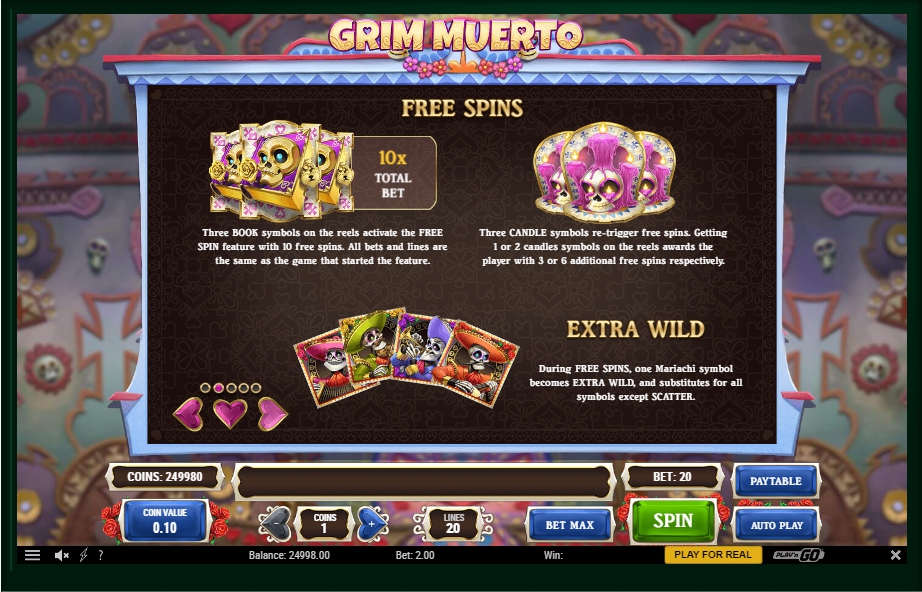 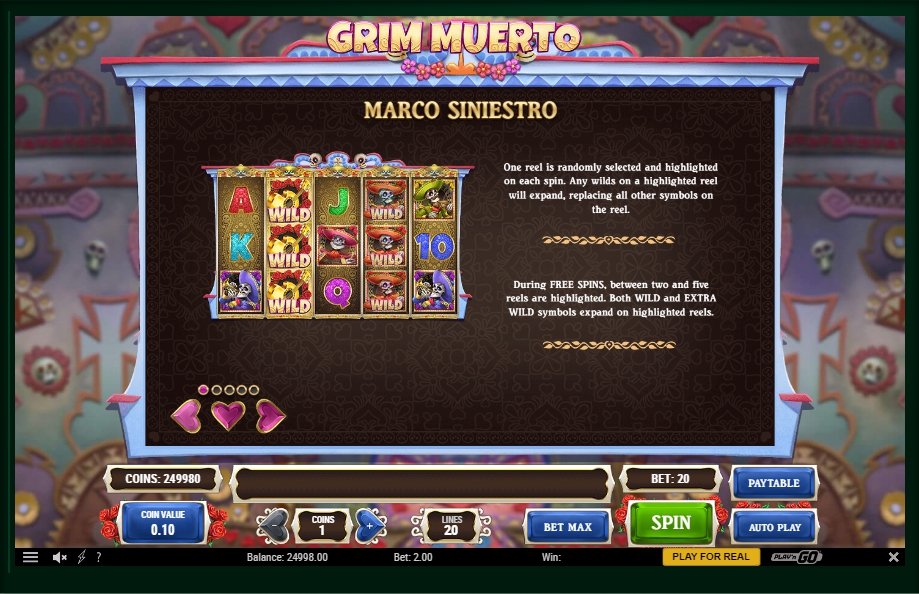 Annually, on November 1st and 2nd Mexicans celebrate the Day of the dead. It is a special holiday for the people, in Mexico traditionally read that still died is remembered and visit, he lives in the underground kingdom of the dead where he cheerfully spends time, feasts and selects whom to take away the following. It’s in own way is an analog of more popular American holiday – the Halloween. In 2014 the animated film came out, under the name Book of Life where the history of this day and also oppositions of two underground kingdoms – Kingdoms of forgotten and the Kingdoms which are not forgotten was described. The motley graphics and interesting subject of the animated film so was pleasant to Play’n GO developers that they decided to release the gambling machine coordinated by the Mexican Day of the dead too – Grim Muerto.

Design of this online slot is very specific. All here is motley, brilliant, bright. And even in spite of the fact that all characters – skeletons from the orchestra of the Mariachi, look they extremely attractively. In case of start, show to a gambler a picture where gate in a next world open and at once bring the player up to date – what bonuses, the jackpot and combinations are offered by a game. Further, on the screen reels with a figured brown background appear. The logo is beautifully poured, and music reminds cheerful carnival motives. Everything is so cheerful, as you will not tell that it is Day of the dead. However, to be fair it is necessary to mark that Mexicans, unlike us, quite so also see off the dead – cheerfully, musically, with hope still to meet.
The graphics are very modern, with use of technologies of processing and 3D elements. The interface of the user though is laconic, but is very well developed: it is convenient both for the beginner, and for the master.

The gambling machine Grim Muerto is the entertaining video slot which pleases admirers huge with a quantity of bonuses. The main game consists of five reels and twenty lines of payments which the player can regulate by means of the Lines slider. A row located the option Coins which allows betting. The minimum rate to one line – one coin, maximum – five. Respectively, to all twenty lines it is possible to deliver 100 coins. Bet Max accelerates this process and directly exposes the higher indices in a game. In the Paytable tab the game course, special characters and opportunities and also the table of multipliers explicitly is described. Very conveniently, especially for those who came to play for the first time. The symbolics of the main game is various – four musicians from orchestra the Mariachi, the book, a guitar and card characters, traditional for many slot machines. The most profitable the guitar, having collected which in the number of 5 on the line the player is considered benefits a jackpot. To that, a guitar here also the Wild symbol replacing others except for dispersion for the achievement of a prize-winning combination. Before each scrolling it is possible to notice that one of the squares is highlighted. The counter is that if the Wild symbol gets on the illuminated square, then it will extend and will replace all symbols with itself.

Except for the wild, the scatter in the form of the book is provided in a game. The book drops out on the first, third and fifth reels. If to collect 3 such scatters, the gambler is given 10 free spins. At the same time, symbols of musicians of the Mariachi act as jokers here supplementing combinations. One of these symbols, getting on the illuminated field, extends and replaces with itself others. There is also an opportunity to win additional free spins, having collected 3 candles during free rotations on the 1st, 3rd and 5th reels. Having collected 1 or 2 candles, the player receives respectively 3 and 6 rotations.
And for those who haven’t enough these bonuses there is a mode the second chance which is activated if it was lucky to collect 2 symbols of the book, but for the free spins it isn’t enough. At choice four musicians are provided, it is necessary to guess what of them have hidden the third symbol of the book. Having guessed, the lucky wins 10 spins!

Eye of The Kraken