When we talk about pirates, first of all we think of pirates of the Caribbean and the east coast of America. In reality, piracy has a much longer history. The Jolly Roger slot machine from Play`n Go has a funny theme that focuses on pirates and treasure hunts. Incredible sea adventures are waiting for every player of the slot, so finding a treasure will be very easy.

The design of the slot machine is presented in very beautiful colours. Here the main background is represented by a pirate ship. Every detail offers high quality graphics. Also there is good animation and interesting music, so the sea adventure promises to be exciting. Here the control unit is built according to the maximally simple principle, so it will be very easy to understand the basic rules of the game. Beginners and the most inveterate casino players like this gaming machine, so it is more like a treasure trove. In the Jolly Roger online game, you will find an exciting sea adventure that will allow you to find a great treasure. Entering the ship of the video slot, it is necessary to get acquainted with the payout table, which is launched with the Paytable button. All the details and nuances of the game process are indicated here. 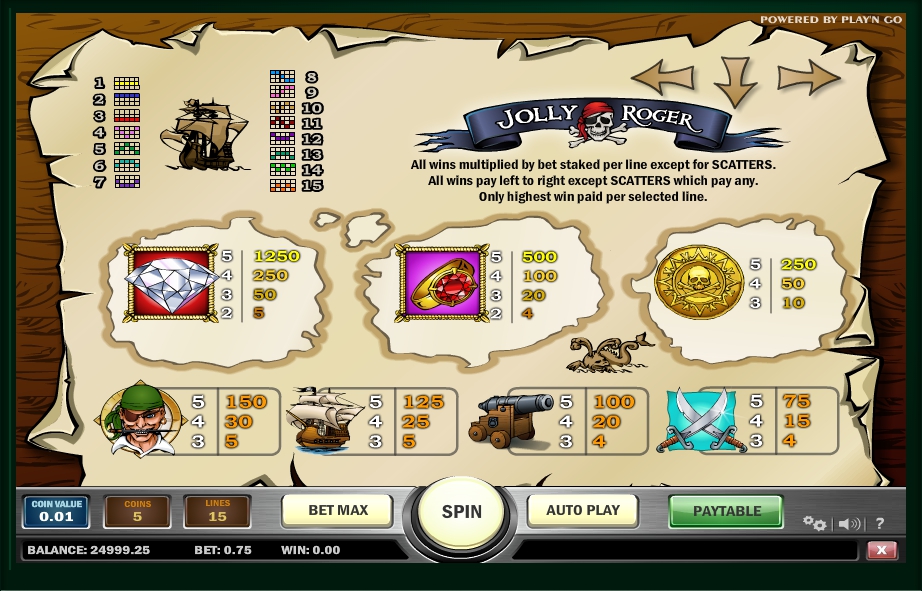 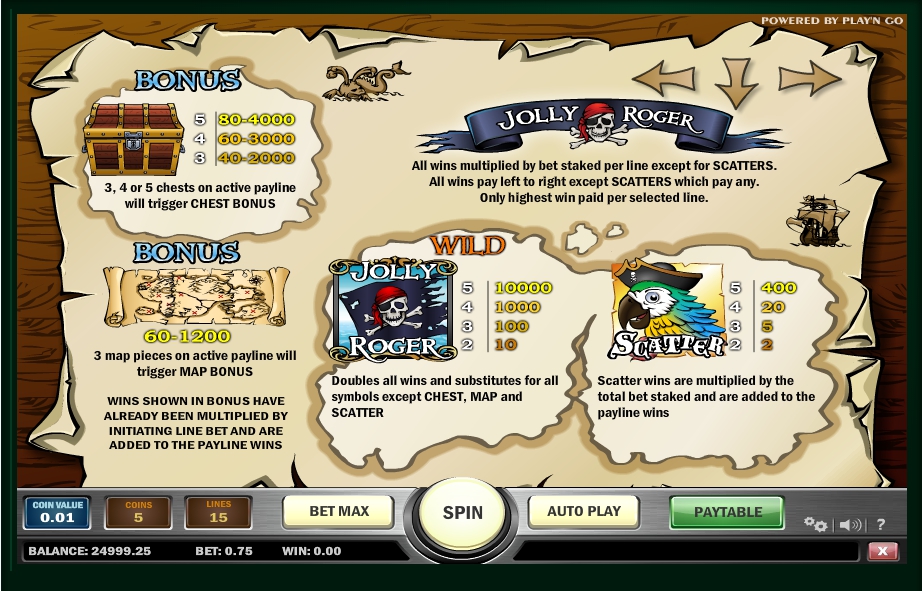 Starting of the gameplay follows with the choice of a bet, which is determined in several stages. First, you need to select the value of one coin using the Coin Value button. Then you must select the number of active lines using the Lines button. The maximum bet can be made by activating just one button, which is Bet Max. Running the reels will be done with the Spin or the Autoplay button.

Here you can find a lot of pleasant surprises, which are in the features of the game characters. There is a wild symbol here that is represented by the Pirate Flag. Also in the slot, there is a scatter symbol – a Parrot. The developers also awarded the Jolly Roger slot machine with two bonus symbols that will launch prize rounds. The first one is a chest. In this bonus round, you need to find a chest that contains the maximum reward. However, Treasure Map can bring a very pleasant surprise. The main thing is to collect three identical symbols on the active line, after which the “Card” bonus round will be launched. In this game, you will search for a treasure using a map. You should choose three places for digging, and if the Luck is on your side, you can get a prize of 1200 bets.

The sea adventure with pirates can begin right now, it is only necessary to launch the Jolly Roger slot machine. This video slot hides a lot of pleasant surprises. Booze, gold and women on the beach – that is all that most pirates were interested in. However, despite this, many pirates deliberately worked for some states. The needs of pirates always concerned, first of all, ships and weapons. Pirates simply had to possess the fastest and the most powerful fleet. There were many pirates of different nationality, as well as their views, weapons, tactics of combat and ways of life.
Meet the life of pirates, and you will know all pleasures of robbery!