SORRY, DEMO GAMES ARE NOT AVAILABLE IN YOUR COUNTRY!
(3 votes)
Full screen: Report a Problem: close 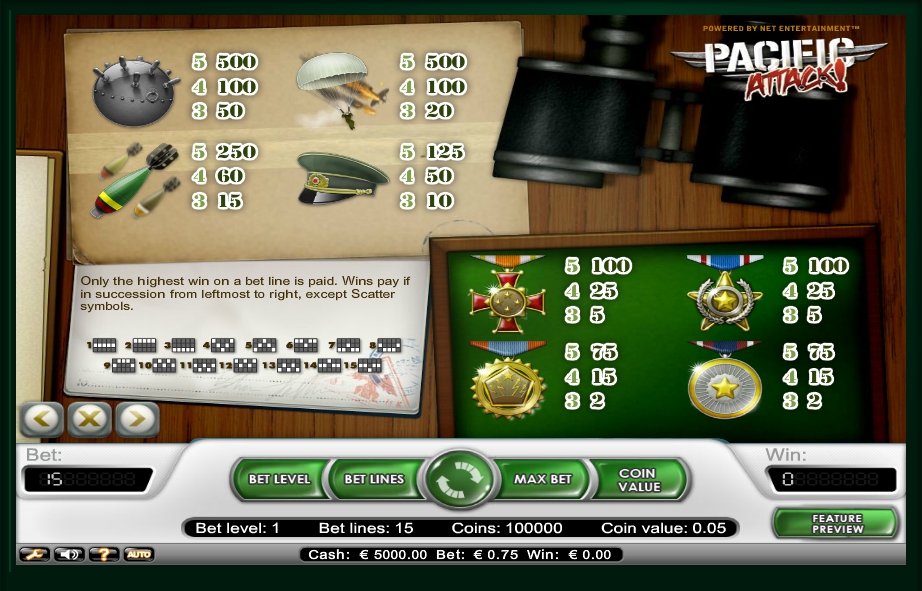 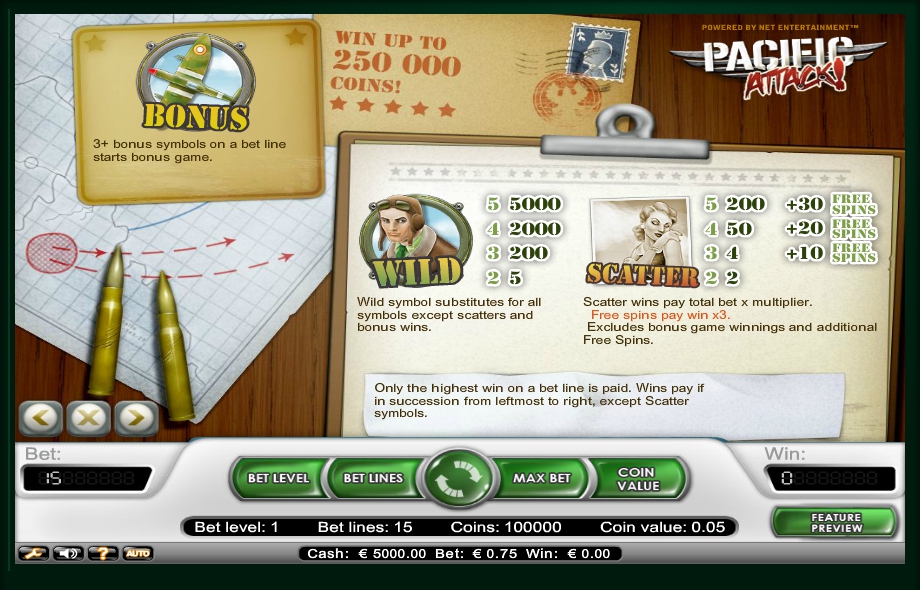 During the Second World War, battles were fought not only on land, but also over the ocean. They were cruel and bloody. All possible military resources were involved here: warships, aviation and submarines. The user is given a unique chance to become a participant in the Pacific Battle and control one of the military aircraft. All this is real thanks to the company Net Entertainment. In this slot, the user has a chance to join the ranks of military pilots.

The flaming ship of the enemy and the attacking aircraft accompany the entire gameplay. The waters of the ocean are disturbed by the projectiles that enter it, and the blue sky’s boundlessness is closed by combat aircraft. The silence of the ether is interrupted by radio signals and Morse code signals. Only sometimes you can hear a piece of music or melody that is not connected with the fighting.

Go to the attack will help five reels, the launch of which is provided by the button Spin in the form of two rotating arrows. It will also help to stop the drums at any moment of their rotation. Bet Lines changes the number of active lines within 15, Bet Level betting levels within 20, the Coin Value button. To quickly launch the reels with the maximum settings for bet levels and the number of game lines, you can use the Max Bet button. The AUTO button, located at the very bottom of the playing field, this is a start of the automatic game. Here user needs to specify the number of spins and enjoy the independent actions of the video slot. In addition, you will always have access to custom settings. With their help, the client can turn off the sound, and with the help of “?” to study the theoretical section. The last aspect is the most important in a successful game. Therefore, do not neglect the theoretical section.

If 3 scatters lands on the playing field, customers win 10 Free Spins, 4 scatters lead to 20 Free Spins and 5 scatters result in 30 Free Spins. When 3 or more scatters appear during a Free Spin, the Spins are automatically added to the current number of Free Spins. All wins occurring during extra mini-game are tripled. When 3 or more Bonus images featuring the Warplane appear on a payline, the Bonus game is initiated. In this extra round, players need to complete a mission to destroy the enemy battle fleet. The bonus amounts are won based on the amount of damage inflicted. Additionally, players can win a sum for every battleship they sink. The mini-game ends when all bombs have been dropped.

The Bonus game has 3 parts. First warplanes bomb the battle grid and players win a bonus amount for each battle fleet hit. In the 2nd part, players select a warplane to bomb the fleet. Each aircraft has a different number of bombs to drop and offers a different win. And in the 3rd part, players choose target squares to bomb. If a ship is in 1 of the squares bombed, it is hit and players win a bonus amount. An additional sum is won if the hit sinks a ship.