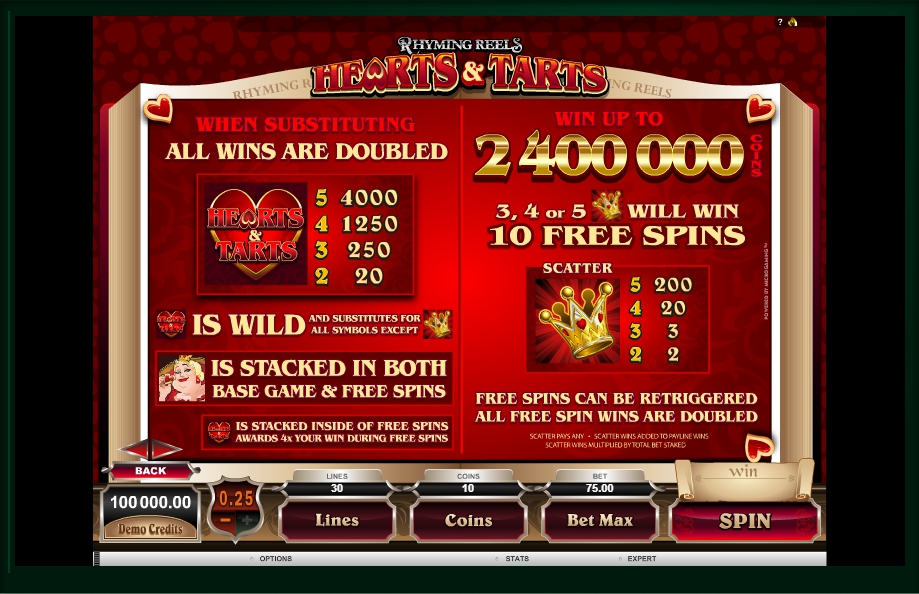 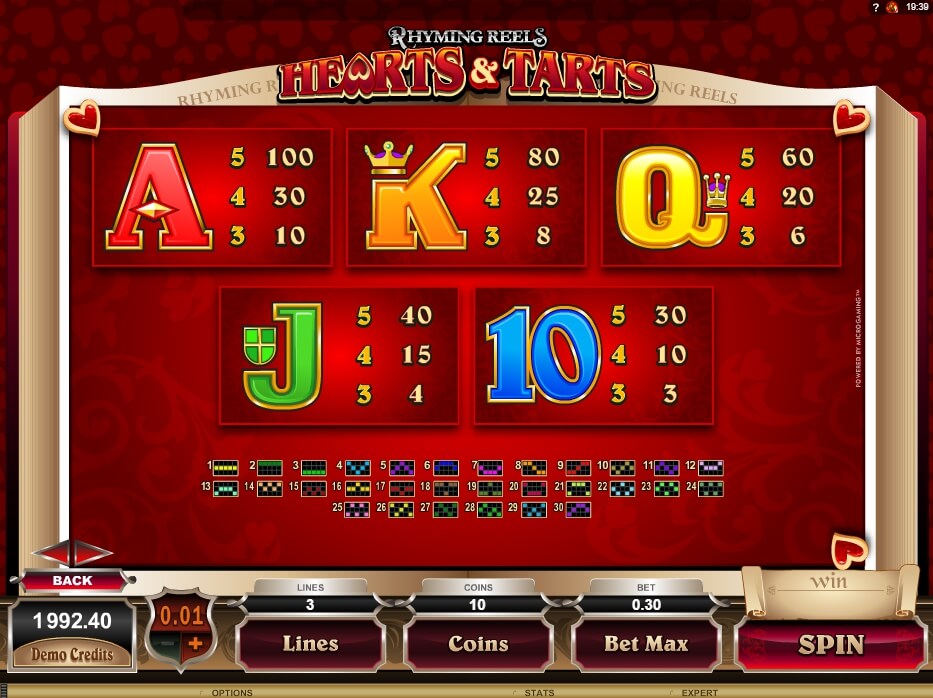 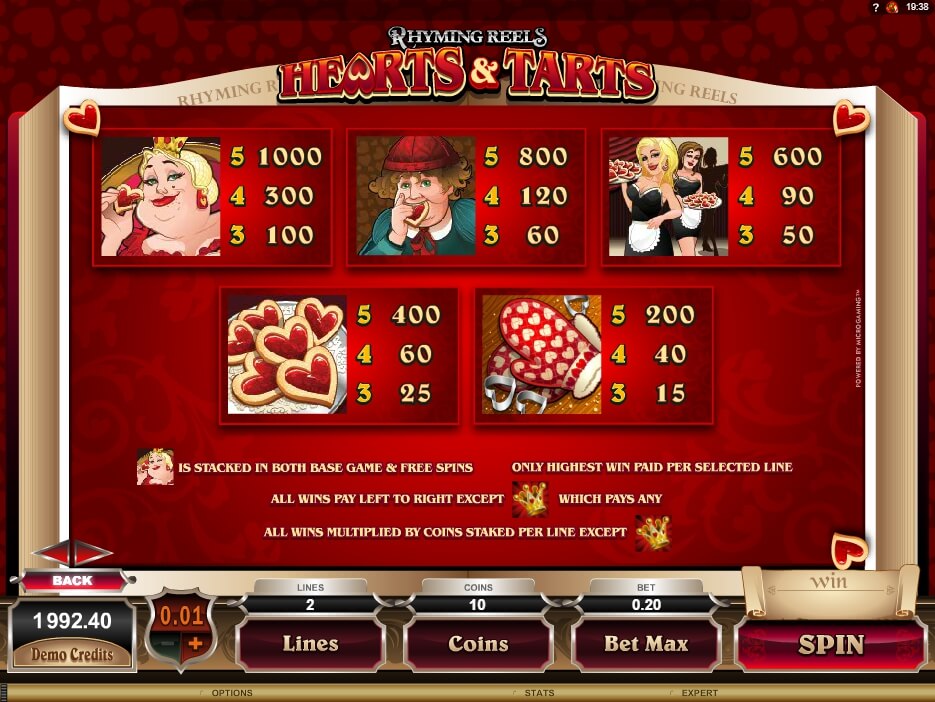 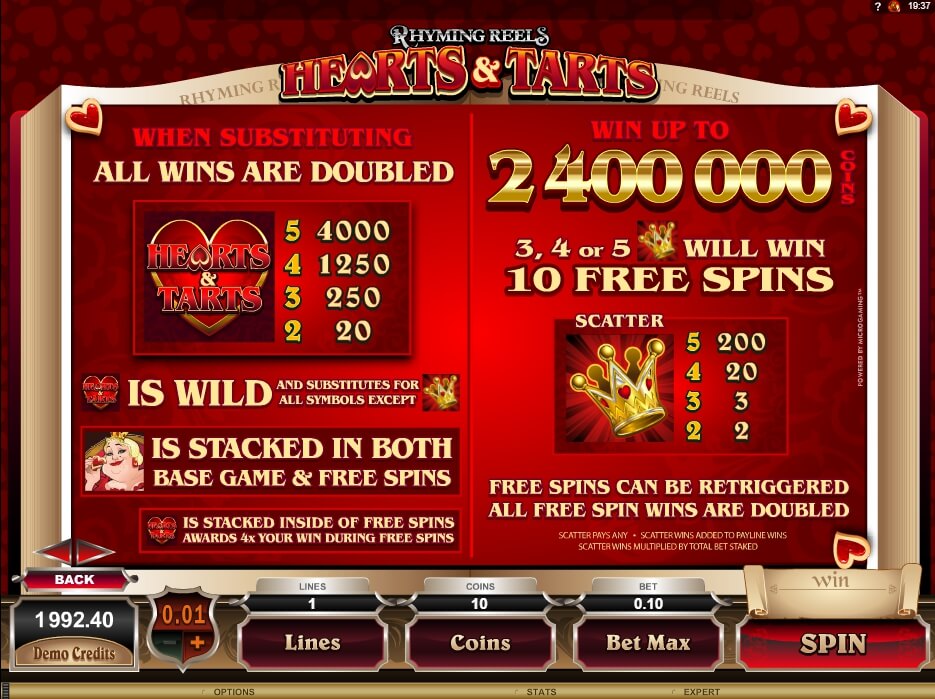 You have not to be in Las Vegas for enjoying a gambling. Just find the online casinos on the internet. We want to introduce you one very tasty and romantic video slot, that is based on the childish poem about the character ‘Queen of Hearts’ from the famous fantasy novel about the fantastic adventures of the small girl Alice’ written by Charles Lutwidge Dodgson (better known as Lewis Carroll) in 1865. Go ahead for the learning more.

The Rules, Gameplay, and Prizes of the Rhyming Reels Hearts & Tarts

We will start with the basic characteristics. The paylines (there are 30) are placed on the 5 reels. The minimum allowed quantity of the coins via a line equals to 1. The maximum = 10. The minimum possible size of the playing coins is 0.010 and the max. – 0.050. Also, presents an ‘Autoplay’ option for the turning the reels (for the multiple times) without break. Continue reading for the knowing functional buttons.

For the picking, the wished denomination of the coin use the buttons ‘-‘ and ‘+’. For the selecting the number of active paylines in the game use ‘Lines’. For the choosing the size of the wagered coins on every payline use ‘Coins’. Press the ‘Spin’ for the making reels turned on. (You can cease them with the ‘Stop’.) For the using a slot’s game with a maximum wager (300 coins), use ‘Bet Max’. There are not so short set of the symbols for the helping you to win the real money: the playing cards’ values (a celestial-blue ’10’; a herbaceous-green ‘J’; a sunny ‘Q’ and a honey-golden ‘K’. (Except the ’10’, all are decorated – the ‘J’ with a little green ‘shield’, the ‘K’ and ‘Q’ with the crowns and purple gems in them; the ‘A’ has a ruby stone on the bottom of the inner triangle.)); the cookie-themed symbols: a pair of red mittens and 3 metal baking molds and a tray with cookies; the people: a pair of the cute waitresses holding a tray with cookies; a curly knave eats cookie; and, of course, the slightly overweight ‘Queen of Hearts’, resembling bewitched Lycentia from an old computer quest – ”Torin’s Passage” – holds a cookie at her mouth. (Notice: All cookies are heart-shaped and filled with the red marmalade in the middle.) Also, we have to admit, that presented jazz music, especially, the saxophone sounds and sense of humor making the atmosphere of this slot machine very appealing.

There are 2 special symbols: the gleaming luxury ‘Golden crown’ – the only scatter. The ‘Logo’ – red text ‘Hearts & Tarts’ (instead of the ‘a’ in the first word, there is an inverted suit of ‘hearts’) that is written in the center of the large red heart – is the Wild. The ‘Golden crown’ activated the ‘Free Spins’ goodie. The ‘Hearts & Tarts’ are doubling your winnings and during the feature which is previously noted, the ‘Logo’ is quadrupling your prizes. The appeared ‘Queen of Hearts’ – the most ‘expensive’ symbol. The biggest prize which you can ever get is $1000!!!